It's no secret that there aren't many women at the top at the nation's biggest corporations. There are just 23 female CEOs at Fortune 500 companies. That's not even 5 percent.

It seems odd that corporate America still has such pathetically small numbers of women in its boardrooms. Women hold less than 20 percent of the board seats on the Standard & Poor's 500 index, according to the women's advocacy nonprofit Catalyst.

The Huffington Post recently looked at the companies on the Nasdaq 100, and we found numbers that were, frankly, horrifying. At 37 of these companies, the board of directors included only one woman. Eight companies, including Garmin, Wynn Resorts, Monster Beverage and Charter Communications, had no female directors at all. 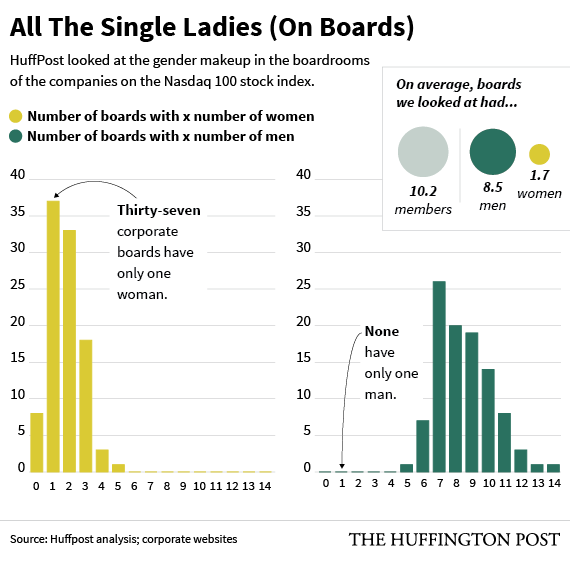 It's 2015, a time when two women are running for president, when the word "feminist" has become a smart way to market T-shirts, underwear and music, and when female consumers represent one of the fastest-growing markets on the planet.

And yet even Facebook -- whose chief operating officer, Sheryl Sandberg, is one of the country's most outspoken advocates for women in the workplace -- has only two women on its eight-person board of directors. Sadly, that qualifies as impressive for a young tech company, many of which have just one female director or none at all.

That's a problem. The academics, activists and corporate insiders we spoke with for this story all stressed the need for diversity in the boardroom -- if for no other reason than because customers and clients themselves tend to be diverse. Having many different kinds of people on your board is just better for business.

"If you are a company who needs to understand the views and sensibilities of your consumer, a woman’s voice on the board is critically important," Wenda Millard, the president of MediaLink and a member of the board of Verifone, told HuffPost. And in fact, one woman's voice is not enough -- research suggests that the ideal number is at least three.

It's not much better if you look around the average C-suite. Only 14 percent of the top five leadership positions at S&P 500 companies are held by women, according to a March analysis from CNN Money.

As you move up the ladder, the women start disappearing:

The lack of women in top positions makes it even harder to find qualified women to sit on boards. But it can definitely be done. Progress in this direction has been slow but real, as The New York Times noted earlier this year.

A few countries overseas have put quotas in place. Next year, big German companies will have to have boards that are at least 30 percent female. Norway, Italy, France and Spain have set the bar higher, at 40 percent.

Americans, of course, tend to be extremely averse to the idea of quotas. And many experts -- men and women alike -- doubt the efficacy of having mandatory percentages.

But there are other options. Companies can set internal goals, or be required to self-report diversity numbers, as Brande Stellings, Catalyst's board expert, told Bloomberg on Thursday.

"Companies set objectives for business objectives that matter," Stellings says in that article. "Why not the board?”