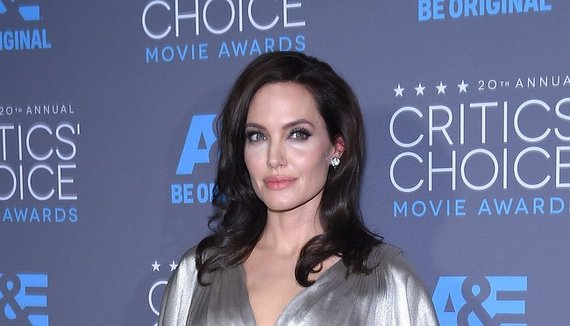 "And there is no more inspiring role model than a man who respects and cherishes women and champions their leadership."
-Actress and humanitarian Angelina Jolie-Pitt addressing the African Union Summit in Johannesburg, South Africa, to draw attention to women's rights across the globe.

Addressing a group of delegates in Johannesburg, South Africa, Special Envoy of the United Nations, Angelina Jolie-Pitt emphasized how it was critical to engage men in the fight for women's rights, saying that the women's rights movement begins at the individual level, according to The Independent.

When it comes to women's empowerment and leadership issues, Jolie-Pitt is a powerful advocate and her recent message in South Africa about role models struck a particular nerve with me.

For most Americans, it is unimaginable what many women endure in other parts of the world. We are so blessed that our daughters do not have to walk for miles to gather the family's drinking water or to attend school or even risk abduction from some local warlords. Like many of you I am moved by their plight yet feel quite helpless to help women and girls half a world away. My commitment is typically prayer and writing a check.

As we head into Father's Day on June 21st, it is a great time for us to reflect on being roles models for all of the women in our lives, including the women we work with; women we can support and advocate for. There is a simple commitment businessmen can make to become champions and role models and that is to advocate for women's workplace equality.

Women's leadership advancement is stuck. Gender inequality thrives at most offices, women are consistently denied promotions they deserve, and more glaringly, they are paid less than men for the same kind of work. As Sylvia Ann Hewlett points out, one out of two women versus one out of four men think gender bias is alive today.

That is why Jolie-Pitt's message in South Africa is important: That women's advancement does not have to happen despite men, it has to happen alongside men. And I believe Fathers of Daughters has a responsibility to demonstrate this advocacy.

We can talk about the business case, strategies or gender diversity initiatives, but for any meaningful strides to be made towards gender equality, men have to feel personally connected and moved to help women around them. And what can be more personal or deeply connected than a father and his daughter?

I know many fathers out there, who really want to help in this area, but aren't sure what to do on a day-to-day basis. The Father of a Daughter initiative describes visual commitments you can take in the workplace to role model being a champion.

Read it, print it and sign it, post it in your workplace and you immediately demonstrate to women that you are advocating for women because you understand the responsibility a father of a daughter has, because what better gift can a father give his daughter than a shot at a brighter future?

What is the Father of a Daughter Initiative?

As the Father of a Daughter, I pledge to do one or more of the following...

- Seek to Understand. Find a female co-worker, someone I can have an honest conversation with, and listen to the experiences she is having as a woman in my company

- Mentor and Sponsor. Mentor a female co-worker. If applicable, become a sponsor for a woman

- Create a Business Case. Write a brief business case for my department or area of responsibility for women regarding revenue, talent or engagement and discuss it with my team once a month during the coming year

- Set An Example to Correct Bias. Act to correct micro bias; from simple things like always having a woman take notes, to women being talked over in meetings or other actions that serve to exclude women from conversations and activities

- Support Workplace Flexibility. Support and demonstrate workplace flexibility for all employees, so that women don't feel they are being singled out for special treatment

- Offer Encouragement. I will encourage women to take more risks, volunteer for stretch projects, and discuss and support their developmental needs

- Encourage Qualified Women to Apply. Urge qualified women to interview for positions when they become available, and if I cannot find a qualified one, commit to developing a woman for the next opening

- Engage Other Men. Engage other fathers of daughters in the discussion of advancing women

- Be Visible. Demonstrate my commitment by joining/attending a women's resource group or event

The Father of a Daughter Initiative is a roadmap for men to make the connection between women at work and their daughters and to stand up for women. To drive real change please consider sharing this with every father you know!

Remember, women's advancement does not have to happen despite men, it has to happen alongside men!

Jeffery Tobias Halter is the country's leading male expert on engaging men in women's leadership issues. He is the author of two books, WHY WOMEN, The Leadership Imperative to Advancing Women and Engaging Men and Selling to Men, Selling to Women.