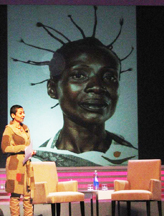 For a second year, Tina Brown, Editor in Chief of Newsweek and The Daily Beast, presented the Women in the World: Stories and Solutions Summit. Many of those who where at the Hudson Theatre in New York City in 2010 -- such as Christiane Amanpour and Barbara Walters -- were back in the interviewer's chair. Brown tied in her newly acquired magazine by featuring Secretary of State Hillary Rodham Clinton on the cover, and "150 Women Who Shake the World" on the inside pages. Featured in an introductory video was Clinton stating, "We must declare with one voice that women's progress is human progress."

There was an emphasis on making connections between those in the audience and the 13 organizations that were highlighted as part of the program. Pledge stations were set up in the lobby, and founding sponsor Hewlett-Packard committed to matching all individual donations.

There were two special events, accompanying the Thursday night dinner and the Friday luncheon. Brown kick-started the energy level with a one-on-one talk with President Bill Clinton, who was relaxed and full of quotable lines. He said mischievously, "It's a great thing about not being in office. You can say whatever you want." He did. On the Israeli-Palestinian conflict he related, "Arafat promised me we would get an agreement before he left office. Like an idiot, I believed him."

Lesley Stahl handled the Friday conversation with secretaries of state Madeleine Albright and Condoleezza Rice. Both women seemed to be in accord on basic tenants -- to such an extent that Stahl commented half-jokingly, "You don't seem to disagree. What kind of panel am I running here?" Albright suggested, "We both have had the privilege of representing our county. That responsibility draws us together." On a less formal note, in response to a question on Gaddafi, Albright wryly replied, "What you have in Libya, is a place that is run by a nut."

Alyse Nelson (Vital Voices) and Zainab Salbi (Women for Women International), representing "Solutions Partners" organizations, were two of the women who spoke about their on the ground work. Nelson told the story of her visit in Burma with Nobel Laureate and dissident Aung San Suu Kyi. Salbi presented photos and gave accounts of women in Congo, an introduction to the "If You Knew Me, You Would Care" campaign that Women for Women has launched.

Several panels were particularly strong. "No Such Thing: Trafficking of Girls in the United States," drilled down on the 100,000 to 300,000 children in American who are sold for sex. The prevailing age range is 12 to 14. Malika Saada Saar, Founder of The Rebecca Project for Human Rights and Dr. Sharon Cooper, brought several insights to the conversation. Saada Saar emphasized, ""The issue is about us [in the United States], as well as about women in other countries. We are criminalizing the girls. We have the laws, we need to use them. But," she lamented, "there is no political will. We have to name the buying and selling of girls, and stop putting them into the criminal justice system. We need to put girls in safe havens." Cooper, who coined the term "pimp culture," explained how the pimp becomes the "daddy, the husband." The PTSD that trafficked girls have experienced is greater than the numbers besieging war veterans. Categorizing the exploiters as "finesse pimps or gorilla pimps," she outlined how one operated under the guise of love/rescue, while the other abducts. Dr. Cooper wrote me via e-mail that a Domestic Minor Sex Trafficking Deterrence and Victim Support Act (S.596) has been introduced and referred to committee, and needs active support from the public.

"Italian Women Fight Back" had the photographic backdrop of demonstrating women carrying a sign that said ¡Ahora Basta! Currently, according to the World Economic Forum, Italy ranks 74th in status for women, behind Vietnam and Peru. Emma Bonino, Vice Chair of the Italian Senate, had plenty to say. "At the end of the day, nobody will give us anything for free. Are we going to wait for men to decide we exist? No!" she declared.

Examining the French ban on the niqab, "The Multiculturalism Debate: Is Europe Stigmatizing the Veil" was led by moderator Andrew Sullivan. He was joined by Ayaan Hirsi Ali, Isobel Coleman, and Liesil Gerntholtz. Questions raised included, "Is the veil a way of containing a woman's sexuality? A choice? A political statement?" Despite the fact that some women don't want to veil, for many, the ban in France comes out of a "troubling context." Ali called for the conversation to go deeper than the cosmetics of the veil, to include pulling girls out of school at puberty and female genital mutilation. Sullivan fielded queries from the audience including, "How do you impose a legal framework on a community standard?" and "Does the full face covering of a woman make it impossible for her to be a full participant in society?" Ali made it clear that there were certain aspects in all religions that she "refuses to accept."

It was impossible not to be awed by the courage, accomplishments, and perseverance of guest speakers. Lydia Cacho, journalist, author, and social activist, spoke of being threatened with violence in retaliation for the reporting she had done in her book The Demons of Eden: The Power That Protects Child Pornography.

Dr. Nawal El Saadawi, the 79-year-old Egyptian physician, writer, and activist, was a stand out. Interviewed by her long time friend, American feminist Robin Morgan, El Saadawi told the rapt crowd proudly, "I was a feminist when I was a child." Being oppressed by both class and patriarchy, she was "in revolt at age 10."

For me, the hour on Friday devoted to "a two-part exploration of women and power" felt like a divergence from the theme of international concerns. Parsing what was holding women back from "reaching the top echelons of achievement" in various corridors of American power seemed tangential to the foremost topics at hand. One in three women is a survivor of gender violence; woman and children comprise 75 percent of the fatalities of war; over 80 percent of the world's 35 million refugees are women and children.

Awareness and engagement are the first steps. Women In the World: Stories and Solutions continues to lead and lay the groundwork for amplifying concerns that have too long remained out of view -- and isolated from the mainstream.