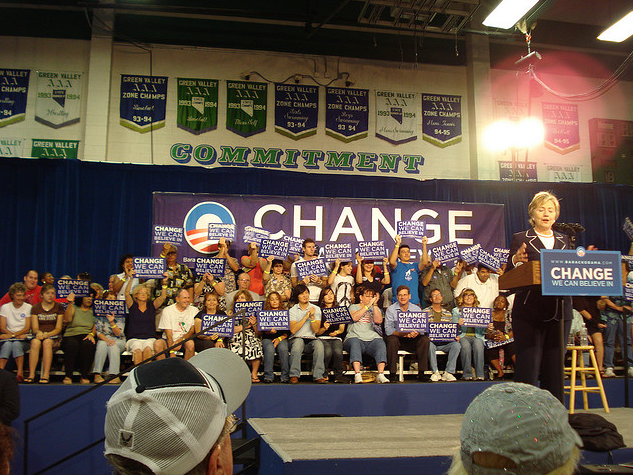 Our numbers are clearly out of proportion.

While women have come a long way in the past 20 years, we are still lagging big time. I remember in 1991 when I was working for the Women's Campaign Fund in Washington, DC, there were only two women in the Senate (Barbara Mikulski of Maryland and Nancy Kassebaum of Kansas). Our mission at the Women's Campaign Fund was to increase the number of women in elected office (who were pro-choice). We did this by recruiting women to run for office, trained them in how to run a political campaign, and helped them fundraise.

Well, the good news is that in 1992, four women were elected into the Senate for the first time ever in a single year (Diane Feinstein and Barbara Boxer of California, Carol Moseley Braun of Illinois and Patty Murray of Washington). Add to this, 24 new women were elected into the U.S. House of Representatives. With this new development, 1992 was dubbed "The Year of the Woman."

When I think of this now, it seems ridiculous. Four women get elected to the Senate and women still filled only six percent of the seats in the U.S House of Representatives and the media calls it "The Year of the Woman"? Having women elected into political office should not be remarkable; it should be the norm.

Alas, I don't live in a cave, and I realize that it's taking us a lot of time to see the wisdom in having a gender balance in our political leadership. If women make up close to 51 percent of our population and men 49 percent, and we are a country built on the philosophy of equal representation, doesn't it make logical sense that our country would be best served by political leadership that actually represented the reality of our population?

Of course, we may not all be ready (or want) to run for Congress. But what about creating and building other public leadership opportunities? Many women build a leadership presence through starting a business, launching a non-profit, heading a professional organization, or becoming a speaker on issues they care about.

I have heard the argument (mostly from men) that if more women were in power in politics and the corporate world, would it really be better? They use examples like Carly Fiorina, Meg Whitman, and Sarah Palin. While I don't want to disparage these women, I can't say that I agree with their policies and tactics. With this said, I strongly believe that with more women in public office, we would have a much truer conversation and debate about what really matters to all of us as citizens of the United States. This, I believe, would ultimately show up in our laws and policies.

If it were the other way around -- say 83 percent women in political leadership, and 17 percent men -- and men wanted to gain gender balance in Congress, would I assume this is because they "hate" women? I don't think so. I would see their desire as a human right. In fact, I would probably help them get elected into office to help us achieve balance.

Now please hear me on this: I don't expect that if we have a gender balance in Congress and the White House, our country will miraculously turn to one of peace and bliss. But I do expect that if Congress and the White House were gender balanced, we would have a more accurate voice representing who we really are in the United States. As a result, our laws and policies would reflect this.

We have suffered with this imbalance for far to long. The recent all-male hearing on birth control is just one example of the glaring gender disparity in our political representation.

When we are in danger of living with proposals for laws that say that women who have been raped must give birth to their oppressor's child, I really question what we are thinking. We all know that it is time for change. But we need leadership. We need leaders who are going to think of the greater good of humanity, rather than short-sighted gain. We need leaders who will make decisions based on love, and not fear. We need you, a woman, as a leader.

To step out bigger with your voice as a feminine leader making change in our country, visit Your Voice Now.