A powerful photography project is raising the question of whether it’s safer to be a cow in India than to be a woman.

Sujatro Ghosh, an artist and avowed feminist, is encouraging women to don cow masks to protest the double standard that exists for women in his home country.

Sexual violence against women has become a prominent issue in India following several widely covered rape cases, including the gang rape and subsequent death of a medical student on a bus in Delhi in December 2012.

In 2015, just 29 percent of rape cases in India lead to a conviction, according to Delhi police data. Just 12 percent of men accused of raping a child were convicted.

The issue of sexual violence isn’t unique to India ― far from it, as U.S. rape statistics show. But for Ghosh and many women activists, the problem gets compounded by the irony that, in India, you could get killed for harming a cow.

“I am perturbed by the fact that in my country, cows are considered more important than a woman, that it takes much longer for a woman who is raped or assaulted to get justice than for a cow which many Hindus consider a sacred animal,” Ghosh told the BBC.

Several states in India ban the slaughter of cows, which are considered sacred by many Hindus. In the state of Gujarat, the slaughter of cows can lead to a sentence of life imprisonment. A member of the country’s leading Bharatiya Janata Party recently introduced the Cow Protection Bill, which would make the crime punishable by death.

In the past two years, roughly a dozen people have been killed for harming a cow, BBC reports. For Ghosh and other activists, the same kind of outrage doesn’t seem to exist when the victim is a woman.

To highlight the issue, Ghosh photographed women wearing cow masks and posted the images on Instagram with quotes from some of the participants.

“At least if I walk down the streets in a cow mask, my chances of being harassed will probably be slim. No one wants to harass anyone who looks like a deity or a representative of a deity,” Nicole, one of the photo’s subjects, told Ghosh.

Suchismita, another participant, was quoted saying: “In a country with astounding levels of rape, molestation, abuse and other manners of crimes perpetrated against women, it is beyond sick that the matter of cow protection and religion has more traction. What use are protected cows and religious sentiments if half the population of the country needs to live in constant threat in order to facilitate it?”

“These last few years, I’ve realized injecting humor is the only way to tackle these idiots,” she added.

Scroll down to see photos from Ghosh’s series below: 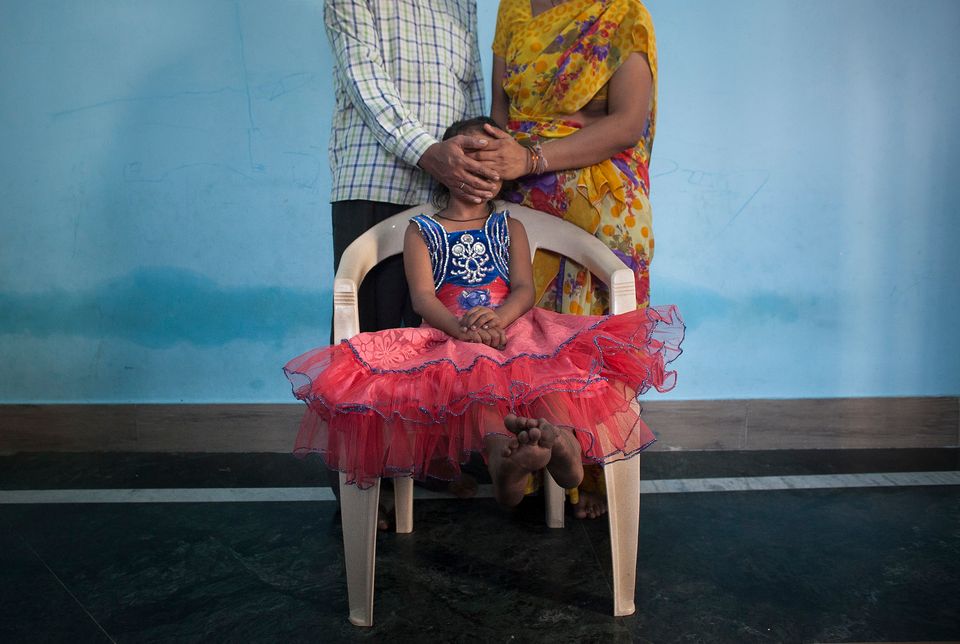 1 / 17
Nirmala
MAHARASHTRA, INDIA - NOVEMBER 12: 5 year old Nirmala (name changed), who was raped by her mother's boss, poses for a photo with her mother and father on November 12, 2015 in Maharashtra, India. One day Nirmala's mother gave her money to go to the corner store and buy food. While Nirmala was walking the man came up to her and offered to buy her candy. He took her to a wooded area behind an apartment building complex, raped her, and inserted a pen inside her. He left her naked and bleeding heavily. She required two surgeries and stayed in the hospital for three months. They caught the man two weeks later. Since he's been in jail, his family keeps coming to Nirmala's family offering them money to drop the court case. Nirmala's family has since moved to a different neighborhood because the neighbors were gossiping, saying things like 'The girl's life is spoiled, what will you do now?'. Nirmala's mother says they won't accept the money offered by the rapist's family, that they want justice instead. (Photo by Getty Images)
Getty Images