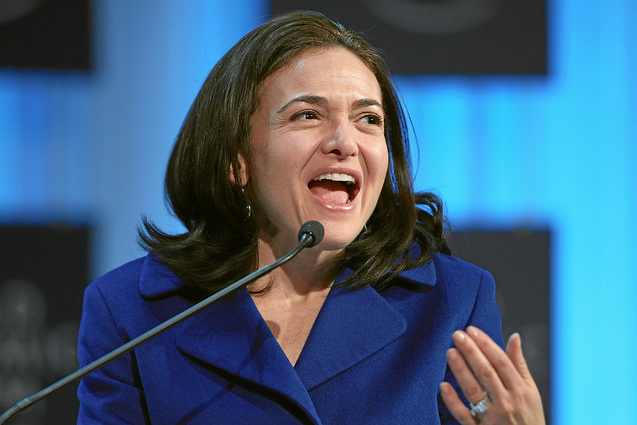 So the obvious question is: How can women gain more power in the world?

Lately there has been a great debate going on about why there aren't more women in leadership positions. The arguments range from "It's about performance" to "It's about biology" to "Women just aren't bold enough." All of these arguments hold some legitimacy, but I think they miss a deeper point. (You'll have to keep reading to get to this point.)

In a 2010 talk at TEDWomen in Washington, D.C., Facebook COO Sheryl Sandberg spoke about why we have too few women leaders. She shared some really important ideas, including how women systematically underestimate their own abilities; how they don't negotiate for themselves at work; and how they attribute their success to outside resources (as opposed to men who attribute it to themselves). She then offered three powerful pieces of advice to help increase the numbers of women in leadership, one of which included: "Sit at the table." In other words, make your voice heard.

Unfortunately, as we know, the numbers of women "at the table" are drastically out of proportion with men.

If we look at the business world, we see that women are significantly underrepresented as CEOS, on boards of directors and as senior officers of public companies. While there are many women hard at work in middle management and entry-level positions, there are very few at the top.

If we look at the political world, women are clearly underrepresented. Out of 197 heads of state around the world, only 22 are women. That means that 89 percent of the countries in the world are led by men.

If we look in media, once again, they are significantly underrepresented. Women own just six percent of the commercial broadcast TV stations in the U.S. And while slightly more than half of local television news anchors are now women, women still make up only 28 percent of local news directors and 16 percent of the general managers at TV stations that air local news.

And even if we look at the non-profit world -- an arena that we think of as led by mostly women -- only 20 percent of women are at the top.

While these figures are all quite ghastly, I am starting to wonder if leadership for women really means rising to the top? Or is "rising to the top" an aspiration that is more fitting for a masculine paradigm, and not the best approach for feminine leadership?

Don't get me wrong. I believe women want to be in leadership positions. But I am questioning if our leadership is about "rising to the top." I am starting to think it's more about rising all together.

You see, in my view, the qualities of feminine leadership have to do with looking out for the greatest good of all humanity. While money and profit are certainly important, I don't see the feminine leadership motto as "profit before people." I see it more as "let's help everyone be health and prosperous." There is no question that feminine leaders see how money is an extremely valuable tool to help people better their lives. But we also see how when money becomes the priority over humanity (i.e the Wall Street fiasco and Bank of America foreclosures), people suffer big time.

I am happy to know that there are programs like Northwestern University's Kellogg School of Management's Center for Executive Women that help women move ahead and into board of director positions for Fortune 1000 companies. But I also think this is just one piece of the puzzle.

In an article last month in Business Insider, Jean Oelwang, CEO of Virgin United, talked about how values that were once considered "too female" are now suddenly vital. "I believe that women haven't been assuming more leadership positions in the world today because the systems we've created often do not place the right value on the strengths that women can bring to the table," she said.

Rather than classifying these values as male of female, she calls them Gaia values. I love this. Gaia is our Mother Earth. She represents the Divine Feminine. If you haven't noticed yet, the Divine Feminine is making her way back into our consciousness.

The great thing about Gaia values and the Divine Feminine is that they are about helping all of humanity live healthier and more prosperous lives. It is never about us vs. them. It is about how can we all prosper.

Ultimately I think for more women to be in leadership positions, we (both women and men) need to honor the feminine qualities of our intuitive nature, compassionate nature, and our emotional nature. As one corporate client shared with me recently, "In order to keep steady at my job, I cut myself off from my emotions -- and as a result, I was cutting off part of my intelligence."

Yes, emotions hold so much intelligence. They are the gateway to our intuitive wisdom and our connection to the greater landscape of humanity.

Right now, globally, too much power is in the hands of men and the masculine perspective. It is very difficult for women to rise in this paradigm. And for the women who have risen to the top, most have had to sacrifice a lot of their feminine qualities and values to get there.

The key to changing this power imbalance is to re-establish what we value in the world. If we continue to try to break the glass ceiling in the traditional ways we've been doing (i.e. survival of the fittest), I believe we will come shattering down with the glass. Our souls are calling for something different. Our souls are calling for us to reveal our feminine wisdom and operate from a place of global compassion.

When a woman honors the feminine within herself, she honors it around the world. This, I believe, is the new path to leadership.

To launch your voice as a feminine leader in the world, visit Your Voice Now.