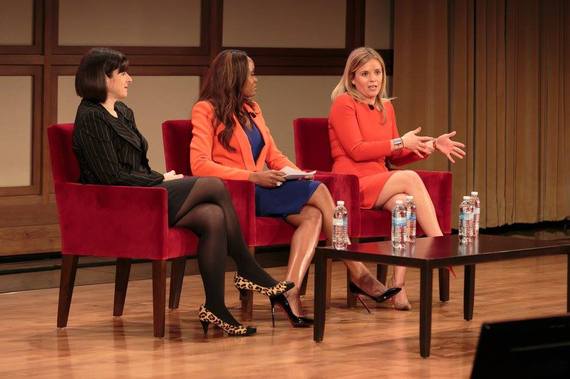 Katie Walsh and Amy Dacey live in Washington, DC and work in politics. They are close friends with similar jobs. Like most close friends, they share perspectives, give each other strength and encouragement, and even tough love when it's needed. They travel together, debate the issues of the day, cover topics from substantive policy issues to shoes, and they agree to disagree when they have to (which is often). Katie and Amy are both high-powered political operatives, they run opposing parties as chiefs of staff to the Republican National Committee and Democratic National Committee respectively.

Like many of the women who spoke at the recent All In Together #WomenLead pre-Super Tuesday event at the George W. Bush Institute in Dallas, Texas, Katie and Amy exhibit the traits that make women uniquely well-suited for leadership - traits that are increasingly valued in organizations large and small, public and private especially as the world grows more complex and more global.

In one of the largest research studies of its kind, The Pete Peterson Institute found that organizations with women in senior leadership and key business unit positions actually produce better investment returns for their shareholders. PwC's own 2016 survey of Global CEOs found similar results, and showed how CEOs are more keenly aware of the value greater diversity of gender, perspective and thought can have on the company bottom line.

To put a finer point on it -- qualities like openness, curiosity, agility, putting yourself in another's shoes, risk management, and certainly multi-tasking are all areas where women naturally excel. Those are the qualities that are increasingly needed and recognized as more desirable than ever.

As Katie and Amy illustrate, the value of these skills and traits extend to the political context as well, where women use their innate ability to connect with each other and look for areas of agreement in an effort to create paths forward, and to make themselves smarter (by understanding the other person's point of view) even while fighting it out on the political "battlefield."

Trouble is, the number of women in Congress still falls far short of where it should be (about 20 percent if you add both the Senate and House together). Having been fortunate enough to know many of these elected women, I set out to gain a better understanding of their views and to figure out what PwC and I could do differently.

Women candidates I talked to described a number of challenges unique to them - from raising money early enough in a cycle to dealing with irrelevant criticism of their hair, their clothes, and their shoes. Interestingly, only women candidates (and I have found this to be true in other democratic countries as well) must answer how they plan to manage family obligations while their male counterparts, who also had children, never received that question. They also lamented the lack of a strong enough pipeline of female talent, as otherwise qualified women often take a pass on running because they don't believe they can make a difference or because they see their skills as more valuable elsewhere.

Based on this input, we refined our political engagement strategy to work on areas that I saw as being within our control, and areas where we could use our brand and reputation to encourage others to join us.

Like most smart investment strategies, investing in increasing the number of women in congress is a long-term investment. Our efforts may only yield an additional seat or two (if we are lucky) in the short-term, but the real value will be realized down the road when there is a higher level of engagement, additional voices, and more corporate entities who put their brands and reputations on the line and who use public policy engagement resources to move the needle to increase women's voices in the political process (and in elected office).

At its core, our efforts are aimed at magnifying women's voices to create richer, more diverse, and better-informed perspectives in the halls of congress. We believe that is critical for our democracy, serves our business and the economy, and empowers women in a way that contributes to the betterment of society. And, like the example set by friends Katie and Amy, who are also political adversaries, we hope to see stronger relationships that lead us to more productive debates around the issues that matter. 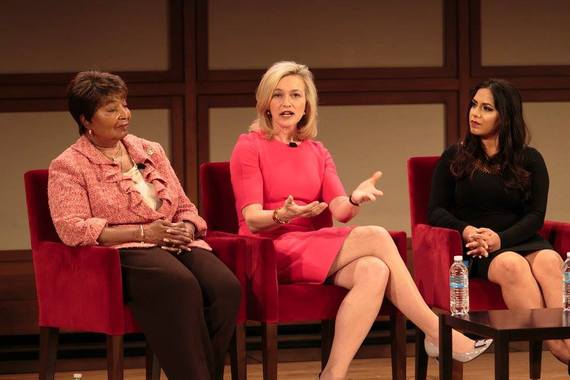 Photo: With Rep. Eddie Bernice Johnson and moderator Rina Shah Bharara, at All In Together Forum, Bush Institute, Dallas, Texas

Because I still believe in the political process, I know each person, each vote and each investment matters and can make a difference. It took me longer than I care to admit to find my voice and to recognize the responsibility I have to think more creatively about how to engage differently on behalf of women. Now that I have, I hope to continue to support creative approaches to moving the needle in support of women.