Women-owned businesses employ millions of American workers in communities all over the U.S. But when it comes to receiving federal contracts and capital, women are still under-represented. That's according to a recent study commissioned by the U.S. Small Business Administration.

More and more, women-owned small businesses (WOSBs) are at the heart of our nation's greatest technological advances, moving the world forward in cybersecurity, clean energy, human capital, and many other industries.

That's why I'm so pleased to report that, at long last, the federal government is breaking the mold for government contracting. Just in time for Women's History Month. ‎

Last fiscal year the federal government set a new record for the highest percentage of contracting dollars awarded to women-owned small businesses in the history of the United States. 17.8 billion dollars, or 5.05 percent of all eligible contracting, was injected into the U.S. economy through women-owned small business contracts, supporting tens of thousands of jobs right here at home.

To put things in perspective, this is the first time contracting for women-owned small businesses has ever been above five percent, a goal set by Congress more than two decades ago.

One of the greatest champions in this effort has been President Obama, who has made support for women-owned small businesses a priority during his administration. When the President took office in early 2009, the economy was in freefall. He quickly put a spotlight on small business support as one of the best ways to kick-start economic renewal. Two months later he created the first-ever White House Council on Women and Girls. Under the leadership of Valerie Jarrett and with the support of countless others in the Administration, this Council has worked to build ladders of opportunity for women ready to take the lead, including as small business owners and entrepreneurs.

Meeting this longstanding contracting goal means five percent is no longer our ceiling but our foundation upon which to build. Last December, the Census Bureau reported that women's business ownership rates are also up 27 percent over five years. Women currently employ eight million American workers and their businesses generate nearly 1.4 trillion dollars in receipts. Today we are working to expand on these strides through SBA's path-breaking ChallengeHER and InnovateHER initiatives.

These historic contracting results for women-owned small businesses show that our efforts have paid off in communities and local economies across our nation. And SBA continues to push forward, using our report findings to add 36 new industry categories where women can compete for set-aside contracts and sole-source awards. This will dramatically expand contracting opportunities for women-owned businesses, paving the way for new jobs and industries to be created.

Bringing thousands more women-owned small businesses more fully into the federal supply chain is not an act of government benevolence. It's an economic imperative. And one of the greatest roles we can play to support these small employers is to open the doors for more of them to earn more of America's business.‎ 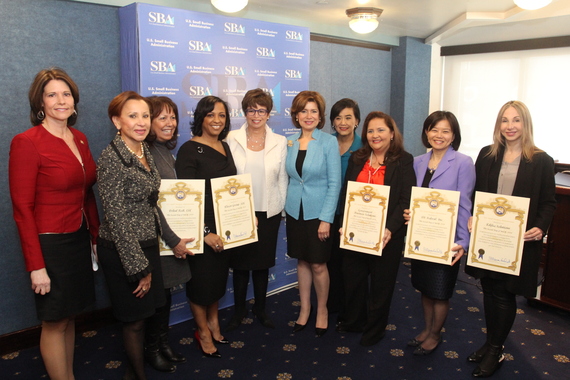