Recent upheaval on the subject of birth control in the United States serves as a reminder of the way religion can be used as a tool to infringe on the rights of women. While this return to battles already won may be unwelcome, females in the U.S. can rest assured that they can protest and vote against officials who don't recognize their rights to family planning. Though Christians still hold great power over our government, we can take comfort in the fact that a judge will not sentence us to punishments advocated in the Bible such as stoning for adultery. With International Women's Day so prevalent in our minds, we should feel encouraged by brave women across the globe who lead the defense of both their human and democratic rights despite opposition stemming from religious zealotry.

In response to a coup d'état against their first democractically elected president on February 7th, thousands of women gathered in the capital of the Republic of the Maldives. They marched in support of early, free, and fair elections. Although their stalwart protests were met by arrests and water cannons, they are undeterred. The struggle to maintain democracy in the Maldives is ongoing, and the women of this island nation know what is at stake.

The persistent activism of Maldivian women has been recognized around the globe. On Thursday, Hillary Clinton and Michelle Obama stood beside Aneesa Ahmed after presenting her with the International Woman of Courage Award. Ahmed was not the first to be recognized for efforts to advance women in the Maldives. Mariya Didi was honored by Condoleeza Rice in 2007 for similar accomplishments. She was taken into police custody shortly after the coup. 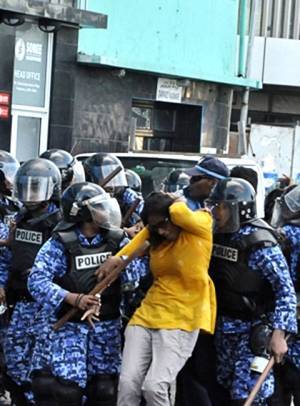 Despite the courageous acts of these women, inhumane practices like flogging are still used in the Maldives mainly as a punishment for females accused of adultery. This Indian Ocean nation may have achieved democracy in 2008, but its constitution rests on an Islamic foundation, which is advantageous to many who wish to assert their fundamentalist beliefs.

A rising tide of extremism has threatened to crash over the Maldives for some time. In early December, the Adhaalath Party (a religiously-based political organization) fumed at the current government's failure to arrest protesters advocating for freedom of religion. One of the protesters was blogger Ismail Rasheed who sustained a skull fracture when attacked during the gathering. Later that month, the parliament pushed a resolution to ban Israel's El Al airline, which offers travel to and from the islands. On February 7th, hard-line Islamists raided the National Museum destroying Buddhist and Hindu relics and statues. This fanaticism isn't only seen in street protests, but the use of violence in the name of Islam has seeped into the country's political system.

When United Nations High Commissioner of Human Rights Navi Pillay expressed the opinion that flogging women found guilty of adultery should be abolished, extremist Muslims protested outside the UN building in the Maldives. Their signs stated, "Flog Pillay" and "Islam is not a toy." At the same time, a Domestic Violence Bill that would allow victims of violence to gain emergency protection and would ease a woman's ability to divorce has been stalled in the nation's parliament for over a year. Under the guise of Islamic law, the bill has been criticized for going against God's wishes. While most inhabitants of the Maldives peacefully practice their religion, a few fanatics could spoil the nascent democracy, especially when it comes to women's rights.

Though the strides of Maldivian women have been many, the continued flogging, the rise in female genital mutilation, and the unwillingness to pass the Domestic Violence Bill are examples of just how formidable a task it is to achieve equality even within a democracy. Imagine if these women lost their opportunity to vote or if elections were not held again. Though the thirty-year dictatorial rule of Maumoon Abdul Gayoom seemingly ended with the elections of 2008, many who held positions in Gayoom's government have returned to power since the ousting of President Nasheed. It is under this cloud of authoritarianism that these women have gathered over the past few weeks.

Eva Abdulla, one of the few female members elected to the Maldives parliament, wrote to me explaining that since former dictator Gayoom experienced international pressure, the public, including women, have become more involved in politics. She adds, "As women make over 50% of the population here as anywhere else, they deserve an equal say in the running of their government. Women need to be heard in both policy formulation and implementation."

With pride, Abdulla described the female response to the recent changes in government:

Abdulla went on to explain that "the women's rally [on February 24] in support of president Nasheed [was] one of the largest gatherings in Maldivian history and definitely the largest women's gathering here ever." 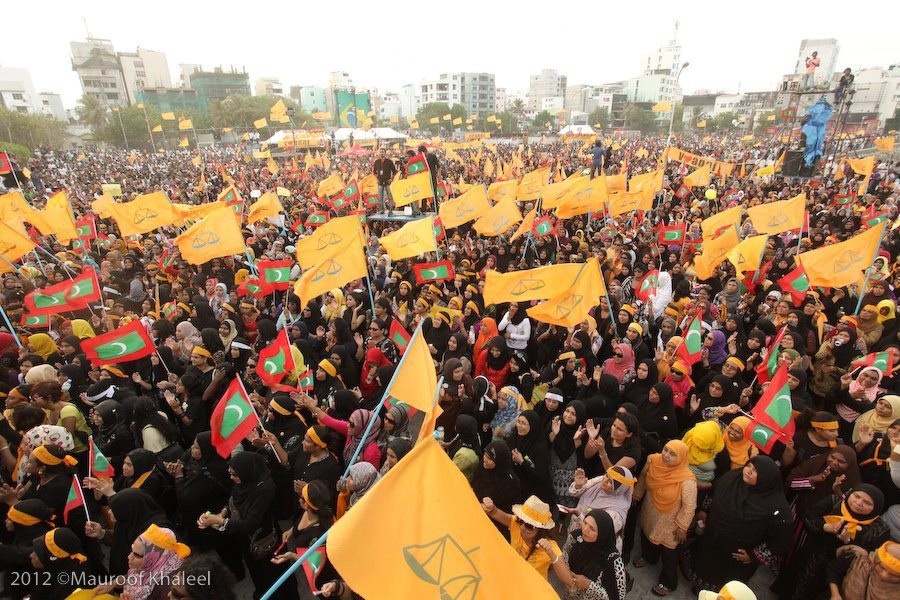 The dramatic role of women in the protests for early elections reflects the urgent desire for democracy on the part of the 50% to which Parliamentarian Abdulla refers. They are conscious of the connection between their right to vote and recognition of their equality, yet the possible return of dictatorial rule is not the only problem they are facing.

Maldivian women are also up against orthodox Islamists who evoke the Quran to support their strict sexism. When interviewed in June 2010 Abdulla stated, "Religion is all too often used as an excuse to limit women." That same year, a UN study reported "Religion was noted by all stakeholders being strongly influential in determining the role, position and status of women in society" and "respondents suggested that a shift towards a more conservative interpretation of Islam is resulting in women's role in the public domain becoming increasingly difficult."

Along with Abdulla, other women who play a role in the government have leveled criticism at the male-dominated system. Aishath Velezinee, the sole female member of the Judicial Services Commission (JSC), wrote on her blog, "I am subject to continued harassment and bullying, belittlement, and ridicule by the 'Men of Good Standing' who decide what is said, what is heard, what is told (to the media, judges, and public), and what goes on record in the JSC." She goes on to complain that she is not taken seriously because she is "a 'woman of no status.'"

While women of the island republic work for recognition of their political and human rights, they are challenged by Islamic radicalism in the new government established through violence. The extreme response to UN representative Pillay's statement against flogging was not the first protest as some staunch Muslims have also rallied against serving alcohol at spas and resorts on atolls popular with tourists.

While he was president, Mohamed Nasheed aired concerns about the rise of Islamic fundamentalism and its impact on women saying, "We can't achieve development by going backwards to the stone age or being ignorant." He asked, "Should we ban music? Should we mutilate girls' genitals? Should we allow nine year-olds to be married? Should we forbid art and drawing? Should we be allowed to take concubines? Is this nation building?''

In their fledgling democracy, citizens of the Maldives face the challenge of balancing religion with human liberty. Now the representative government they so recently achieved is threatened. Since being sworn-in as president, Mohammed Waheed Hassan has restored many from the previous authoritarian regime to their previously held posts. He has even appointed two of Gayoom's children to key positions in his new government.

Unlike U.S. officials who have recognized Waheed Hassan as the new president of the Maldives, Eva Abdulla calls his presidency illegitimate and remarked on her role in protesting his attempt to deliver his first inaugural address to parliament on March first:

"We, MDP (Maldivian Democratic Party) MPs (Members of Parliament) blocked the illegitimate leader Waheed from addressing parliament. 0ver 20,000 of President Nasheed's supporters protested peacefully outside parliament. Once again, most were women, and only women were at the frontline." 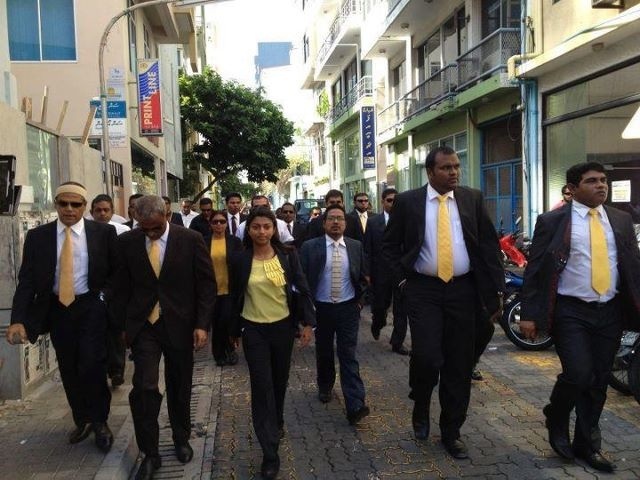 Fear of a return to dictatorship is what fuels the protestors despite the brutal response to their activism. As recently as March 8th, Amnesty International reported that at least six people were injured when met with police during a peaceful protest. On February 29th, 20 women were pepper-sprayed and beaten as they rallied against President Waheed.

As a result of this new regime bent on resurrecting a dictatorship, the voices of all Maldivians could be silenced, and the courageous women of this nation could find themselves thrust back in time. As the Indian Ocean islanders strive to maintain their human rights and continue to seek an end to inhumane practices, their endeavors call to mind what could happen if American women fail to heed warning signs like the defunding of Planned Parenthood or the recently passed invasive ultrasound bill. The power of the people lies in our ability to protest, and those of us in long-established democracies facing religiously-based politics can draw inspiration from the Maldivians' courageous efforts.

Mary Keck is a reporter, blogger, and fiction writer who resides in Michigan with her husband, three cats, and dog. View a portfolio of her work at maryskeck.contently.com.