NEW YORK -- In their first year out of college, millennial women are paid 82 cents for every dollar paid to their male peers, according to a new report from the American Association of University Women. With many of those college graduates saddled with student loans, the pay gap is making student debt more burdensome for women.

The report released Wednesday by the AAUW, "Graduating to a Pay Gap," shows women are less likely than men to be fully employed one year out of college, and when they do have a steady job, women are earning less. Consequently, more of them are contributing a higher percentage of their salary toward repaying student loan debt.

"'Graduating to a Pay Gap' paints a disturbing picture for college-educated women, who are losing out financially, from their first paycheck to their last Social Security check," said AAUW Executive Director Linda D. Hallman. "We must address this workplace barrier so that our daughters have the same economic opportunities as our sons."

AAUW's report takes a look at men and women straight out of college with equivalent backgrounds and experience, most of whom are young, relatively inexperienced in the workplace and haven't yet started families.

Part of the reason women typically earn less can be explained by the subjects they studied in college. "Men are more likely than women to major in fields like engineering and computer science, which typically lead to higher-paying jobs," the report stated. Women are more likely than men to major in fields like education and the social sciences, which usually come with lower salaries.

Pay discrepancy early in a woman's career can have lasting effects, notes Francine D. Blau, Frances Perkins Professor of Industrial and Labor Relations and Professor of Economics at Cornell University.

For example, if a working couple faced the possibility of moving for work, typically the lower-earning spouse loses out to the higher-paid in the decision, Blau explained. "So the [the pay gap] kind of fuels decisions that would lead to a wider gap in the future for the couple," Blau said.

The report chalks part of this up to gender discrimination, which is illegal thanks to the Equal Pay Act of 1963, signed into law by John F. Kennedy, and the Lilly Ledbetter Fair Pay Act of 2009 enacted by President Barack Obama. But the AAUW notes increasing numbers of claims filed with the Equal Employment Opportunity Commission and the settlements reached each year show gender discrimination remains a problem.

"This is part of the reason why we want to pass the Paycheck Fairness Act," Lisa Maatz, AAUW director of public policy and government relations, told The Huffington Post, referring to a proposed law which would seek to ensure women are paid the same amount as their male counterparts.

Maatz said the AAUW takes issue with employers instituting policies that forbid employees from discussing what they're paid. The Paycheck Fairness Act would allow colleagues to discuss their salaries with impunity. "While she was not a recent college graduate, Lilly Ledbetter didn't know, or find out definitively, about her pay discrepancy for 20 years," Maatz said.

An attempt to pass the Paycheck Fairness Act was blocked by Senate Republicans in June, which Obama called "incredibly disappointing." In the absence of a law like this, Mark Kantrowitz, publisher of FinAid.org, recommended applicants use resources like Payscale.com or Glassdoor.com and come armed with information when trying to negotiate salaries.

"Graduating to a Pay Gap" also highlights the effects of a gender pay gap on student debt, noting that "women and men pay the same amount for their college degrees, but they often do not reap the same rewards."

Kantrowitz said women are more likely to graduate with student debt, which isn't necessarily a bad sign, as that may be due in part to the greater number of women attending college and their higher graduation rates. However, the AAUW report shows the pay gap increases the debt burden for women.

The AAUW made a number of recommendations in the report beyond advocating for the Paycheck Fairness Act. When choosing a major in college, women should consider the expected annual salary -- a tip men would be wise to follow, too. The report's authors suggest women need to request the salary they believe they are worth, although they also caution individuals not to think they can simply negotiate their way out of a pay gap.

"In terms of loans," Corbett said, "we recommend protecting Pell Grants to reduce the need to borrow and ensuring borrowers are well informed." The AAUW did not allude to any legislation in particular, but several bills have been proposed to require greater disclosure about financial aid options.

For employers, Corbett said they can review what they're paying their own women to ensure they do not have a wage gap. "Morale among employees is better when they believe their employer is fair," Corbett said.

Maatz said they have sent information about the report to both the Obama and Mitt Romney presidential campaigns. While Obama is on record supporting the Paycheck Fairness Act, they have not heard Romney speak out directly on the issue.

"[Romney] has yet to respond, and we're disappointed with that," Maatz said. "We feel like this shouldn't be a partisan issue, this should be a family issue, a bread-and-butter issue." 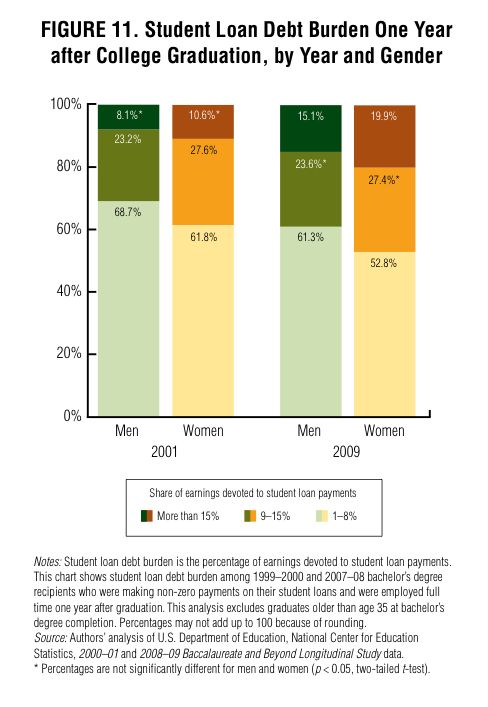