Now that a health care bill has been passed, many of Nancy Pelosi's detractors have recategorized her from the nomenclature of goat to the status of hero. Pelosi, in the House of Representatives since 1987, became the Speaker of House in 2007. She is second in the United States presidential line of succession. Pretty impressive, when you consider that women make up only 17% of the seats in Congress. Internationally, America is ranked 84th in the number of women serving in the national legislature, lagging behind Afghanistan and Cuba.

In March I attended an event sponsored by the Women's Campaign Forum, which launched, "Who Needs More Women in Government? Everyone." With stats showing that "women are one-third less likely than men to view themselves as qualified to run for office," WCF gives candidates early support and endorsements.

Their basis for backing a woman is strictly non-partisan. However, she must safeguard "reproductive health choices for all." When founded in 1974, the WCF was named Women's Campaign Fund. At that time, it had a PAC status and concentrated on giving help "when and where it's needed." In 2006, they reorganized the structure in order to run programs and produce original research. One of their studies, "Vote With Your Purse," examined women's charitable giving. It determined that women give less money to political candidates than men."

When I spoke to Lauren Martin, Communications and New Media Manager for WCF, she informed me that the organization had endorsed more than 2,000 women since its inception. She emphasized, "We're constantly searching for ways to recruit more Republican women who meet our criteria." Studies illustrate that women tend to be more collaborative in their legislating styles. The "She Should Run" program notes that a solution to terminating Washington stagnation would be the involvement of women - who currently comprise 24 percent of state legislatures, 17 percent of Congress, and 12 percent of governorships. Martin informed me that "a woman needs to be asked to run for office an average of six times before seriously considering it."

WCF sponsored candidates were an integral part of the evening. Beth Krom, who has ten years of "elected office" service under her belt, is running for California's 48th Congressional District seat. During her terms in the City Council and as Mayor of Irvine she zeroed in on the economy, education, and environmental stewardship. Krom is poised to get a foothold in what has traditionally been considered a solid Republican stronghold.

Ann McLane Kuster is going after the 2nd District open seat in New Hampshire - which her mother ran for in 1980. The first person in her state to publically oppose the Stupak Amendment, she has been outspoken on health care and her belief in the public option. An attorney who specialized in adoption and higher education concerns, Kuster worked with lawmakers to fashion legislation that would help middle-income families save for college.

The centerpiece of the cocktail reception at Christie's Auction House was a "performance" delivered by twelve prominent women standing on ladders, delivering succinct thoughts to the audience. They included Ohio Secretary of State Jennifer Brunner, who is currently running for the Senate, and Swanee Hunt, United States Ambassador to Austria from 1993-1997. 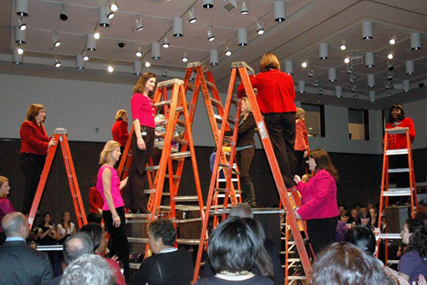 I talked with Avis Jones-DeWeever, from the National Council of Negro Women, before she went aloft. She told me that NCNW was partnering with WCF this campaign cycle to "identify more women of color" to bring into the process. She said, "It's a good non-threatening way to get activists to represent interests, and then take those names to the next level."

Christie Hefner, identified in the program booklet as the "longest-serving female CEO of a public company in U.S. history," mingled with guests before taking part in the presentation. One woman approached her and asked, "How do you reconcile working at Playboy with your support of feminist issues?" Hefner responded by outlining the "political stands" which Playboy has taken over the years. When pressed on the subject of the photographs featured in the magazine, Hefner replied, " They are clearly celebratory, clearly romanticized pictures." As an after thought she added, "I could have gotten the paycheck somewhere else."

The color of the night was purple. It was featured in pens, printed cards stating "Ask a Woman to Think About Running," and with t-shirts emblazoned with "She Should Run." The symbolic violet hue harkened back to the days of the suffragettes.

The WCF Board Chair, Maggie Kavalaris, told the crowd to take out their cell phones and text "WCF" to FUTURE (388873). This would connect them to the WCF wireless community for updates on women and politics. Sam Bennett, President and CEO of WCF, expressed her feeling that "not a single endorsement meant as much in my race as Women's Campaign Forum." When people were telling Bennett that her candidacy was not viable, the WCF nurtured her. When she lost, the note she received from them stated, "You're a great woman leader. Run again."

Barbara Lee, Founder and Chair of the Barbara Lee Family Foundation, underscored her efforts of the past ten years to elect women governors - because "governorships are the pipeline to the presidency." The themes reiterated throughout the evening were: "It's important to have women decision makers who understand about diversity; Women in government champion anti-discrimination laws; Young girls need role models; Half of all elected officials should be women."

After the reception segment, guests adjourned to pre-selected dinner parties hosted around Manhattan. I attended the Lifetime Networks gathering, where Regina Calcaterra, who is running for the New York State Senate in the 1st District, spoke. She recounted the story of her personal epiphany in 2008, when she went to vote. Calcaterra related that she "saw two things that were wrong with the ballot." They were, "No women [running], and a conservative senator for State Senate was running unopposed." She commented on the "chaos Albany is today," and stated, "I understand the power of state government." Calcaterra pointed out that whoever wins the majority of seats are "who redistrict the congressional seats."

Jenni Luke, the Executive Director of Step Up Women's Network, filled me in on her national non-profit organization. Their mission is to connect and advance women and girls by matching communities of professional women with underserved teen girls. Lorelie Masters, co-host of the dinner and WCF Board member, conveyed to me, "We need more critical mass. Change won't come until we have more women in politics." Masters spoke about the emotional and financial support that is offered to women candidates at all levels. "We are political venture capitalists. We invest in women," she said.

President of Hearst Magazines, Cathie Black, echoed that point of view. "It's all about the check book. If we don't keep talking about it, it will not happen." Ellen Levine, Editorial Director of Hearst Magazines, referenced the recent headlines about the Eric Massa meltdown when she said, "It's my really deep belief that if we have more women in office we will not have major media stories about tickle fests." On a pragmatic note she added, "I believe in equality. We vote more. We are simply not represented."

Bennett, who had been making the rounds of all the gatherings, showed up toward the end of the evening. We conversed about her appearance on the Chris Matthews Show, where she discussed the Martha Coakley defeat. Her final words to me conveyed her conviction on the role of women in politics. "We only lose when we do not run. It's time to move the national needle."