I was as surprised as anyone when news broke that Sen. John McCain had chosen Gov. Sarah Palin as his running mate. I was in the midst of working on "Women, Power and Politics," a special episode of NOW on PBS airing this weekend, and the experience of meeting female political leaders around the world had given me fresh perspectives on what it means to have a woman in office. 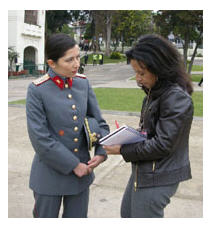 During interviews with a new generation of female politicians -- in the U.S., in Chile, in Rwanda, and elsewhere -- it became increasingly clear what they seemed to have in common: They did not want power for power's sake, but to enact policies that would directly improve the lives of other women. And they were doing it.

For me, Palin's nomination raises a significant question: Is a woman candidate always a women's candidate? How would she fight for women's causes? Some of these questions about Palin are addressed in our interactive debate. I actually met and interviewed Palin in a show that aired last month.

With Chile's first elected female president, Michelle Bachelet, the intentions are clear: she legalized divorce, created free pre-kindergarten, brought the morning-after pill to her country, built shelters for abused women, targeted deadbeat dads, cracked down on sexual harassment and is currently trying to pass an equal pay law. In downtown Santiago, Chile, women from all walks of life told me Bachelet's policies were having a positive impact on their lives. As a trailblazer for other women, she was empowering young girls and women, who had learned that they could run for office and win. Some women from this traditionally male-dominated culture even told me that having Bachelet in office changed the relationship dynamics with their husbands at home.

What impressed me about Bachelet was how she has found her own uniquely female voice as president. She shared with me her belief that women can and should find their own style of leadership -- they don't need to act "just like a man" to be taken seriously.

In Rwanda, one of the last places I expected to end up for "Women, Power and Politics," it's surprising to learn that women actually make up nearly half of parliament, putting it in the top tier among nations for the percentage of women in government. In fact, preliminary election results out this week from Rwanda show that it will be the first country where women outnumber men in parliament. The story of how women gained power in Rwanda is inspirational. 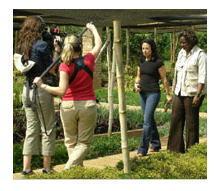 After the horrific genocide some 14 years ago, women were brought in to help rewrite the constitution because it was believed that they would be better at the process of reconciliation than men. These women used their power to create concrete changes in policy that would directly impact women's lives for the better. As a result, women can now work without their husbands' permission, inherit property, and created a law, whereby 30 percent of parliamentary positions must be held by women. Imagine half of the U.S. Congress being women!

We witnessed the influence of female Rwandan leaders first hand, when male legislators in parliament wanted to pass a health care bill that female legislators worried would not be beneficial to women. The women flooded onto the floor and literally got into the faces of their male counterparts, pointing their fingers and raising their voices.

The notion of global women in power actually hit me last November during a conference in New York City. More than 100 women political leaders from around the world were there, including the female presidents of Sri Lanka and the Netherlands Antilles; the former president of Latvia; the former prime ministers or presidents of Ireland, New Zealand, Australia, and Canada; as well as ministers serving in governments across Africa, Asia and Latin America. Even though I was a women's studies major at Barnard College, and have been surrounded by powerful women my entire life, something felt different in this room. As I scanned the crowd at the Essex Park Hotel, where white men once dominated in the recent past, I couldn't help but feel the sea change.

This change is reflected in a new generation of young, aspirational girls. I wish you could see the determination and ambition I saw in the eyes of students I met at a girls-only high school debate tournament in New York City. As one of them said:

"It's very important for our country to have a woman leader because for a country that preaches so much about equality, I think that we don't offer such equal opportunities within society...why are we still struggling with this issue? Every woman needs to see...a woman be a leader of this country."

We've asked some notable women in power, including Maria Bartiromo, Sherry Lansing, Tina Brown, Ashley Judd, and Maya Angelou for their advice to the next generation of women leaders. Ms. Angelou writes inspirationally: 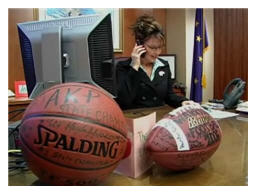 Clearly, Sarah Palin has no issues owning her power. Even those who might disagree with her politics have to give her kudos for stepping onto that stage at the Republican National Convention and giving a powerful, perfectly-delivered speech. She inspired the same feelings in me as when I saw Michelle Obama speaking in New Hampshire back in June. She stood tall, and held it together as cameras followed her every move.

Perhaps, in the year 2009, American women and their daughters will be a little less afraid, and have a little more confidence in the fact that that we can claim power, own it, and govern fairly. No matter who wins in November, it's time to up the ante in gender politics to provide more opportunity and improve the lives of women across the United States.