Tomorrow, two women will boldly go where no woman has ever gone before -- across the stage at Fort Benning, Georgia, the first in history to graduate from the grueling and prestigious Army Ranger School. This will be an historic day for women, particularly for women in the military. These two women have proved what many of us have argued for years -- that if given the chance, there are women who can hold their own with the most elite warriors in our military, and that all the barriers to women achieving their full potential in the military should come down. 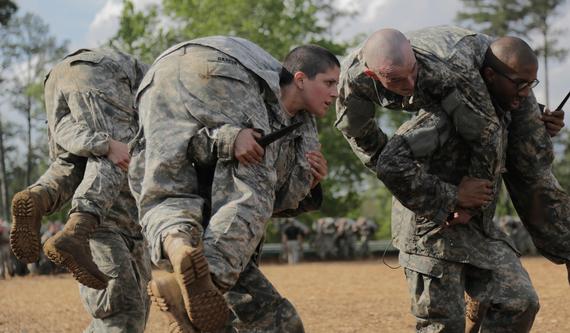 The two West Point women who will graduate from Ranger school showed everyone -- all the protectors and skeptics alike -- that women are up to the challenge of meeting the standards, and that men are up to the challenge of accepting them as full fledged members of the team. They all have paved the way for those women in the future who want to not merely serve, but to fight for their country. I hope that the military services, particularly the Marine Corps (which is reportedly considering a request to ban all women from infantry), will now rise to their challenge, complete the work that Secretary Leon Panetta and Chairman Marin Dempsey directed, and open all units, positions and jobs in the military to anyone who is qualified, regardless of gender.

Throughout our history, American women have stepped up to defend our country alongside men -- but they have always been restricted in what they were permitted to do. More than twenty years ago, in a move to open military jobs to women, Secretary of Defense Les Aspin put in place something called the "direct combat exclusion rule," which barred women from jobs that required them to engage the enemy at close range on the battlefield, including the infantry and its most elite fighters, the Rangers.

But the notion of front lines and direct combat did not square with the reality of the wars in Iraq and Afghanistan. Thousands of women found themselves under enemy fire and hundreds were hurt or killed by IEDs and other nonconventional attacks far from what was considered the forward edge of the battle. Indeed, beginning in 2011, a few Army women actually deployed with Rangers and other special forces deep behind enemy lines to gather crucial intelligence from Afghan women and children -- a job that men simply could not do.

Upon taking office, Secretary of Defense Panetta was determined to level the battlefield for women -- to give everyone the chance to achieve their full potential regardless of gender. Within weeks of becoming Secretary, Panetta opened a few thousand positions (slots) to women. But he was not satisfied with a slow slog toward equal opportunity for all, only opening job categories one or two at a time. He wanted to open them all, and he hired me onto his personal staff to help him.

At the time, the military was in the midst of implementing the repeal of another seriously outdated policy -- "Don't Ask, Don't Tell" -- and there was a concern about forcing another big culture change too soon. But Secretary Panetta kept quietly reassuring military and civilian leaders in the Pentagon that equal opportunity for women would make our military stronger. He believed that if the Services kept their job standards and qualifications high, it would both improve readiness by expanding the pool of people who might serve, and provide thousands of women the opportunities they deserved to excel in new fields.

After President Obama's re-election in November of 2012, Secretary Panetta began to plan his departure, and the final decisions that would be part of his great legacy of national security achievements. He wanted to eliminate the direct combat exclusion rule as one of his final acts. He directed me to draft the rule change and work with the Joint Chiefs of Staff to address any concerns about possible readiness impacts of lifting the ban on women in combat without giving them time to prepare.

We worked to create a realistic timeline under which the Services could develop gender-neutral standards and qualifications for the closed positions. The assumption had always been that men could do these combat jobs, and women would never be asked, so precise occupational standards were not needed. We flipped the paradigm, creating a strong presumption that all jobs would be open to anyone who could meet those new standards, regardless of gender. Only the Secretary of Defense personally could grant an exception to this policy and ban women again.

In his second inaugural address, President Obama spoke passionately about ensuring equal opportunities for women and girls in our society. It was time to give women equal opportunities to serve their country in uniform. Three days later, Secretary Panetta and Chairman Dempsey appeared at a press conference in the Pentagon and made their stunning, surprise announcement. They issued an unusual joint policy memo eliminating the combat exclusion rule and setting in motion a three-year process to open all military jobs to qualified women. 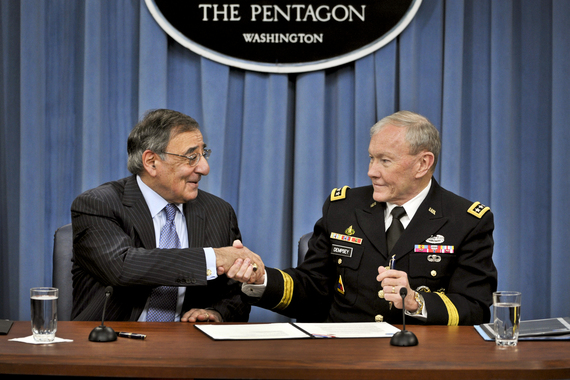 Now, nearly three years later, the day when women are finally allowed to "be all that they can be" is getting closer. Since the policy change has gone into effect, the Services have opened thousands of positions and dozens of occupations to women. But the vast majority of closed positions and jobs remain that way today. These women will wear the Ranger tab, but the job of being a Ranger is still off limits to them. Developing gender-neutral physicals standards, and overcoming paternalism and generations of doubt about the ability of women to succeed in combat, has taken time. But, thanks to these women Rangers, I can now envision a day when a woman will rise to the highest position of responsibility in the military, Chairman of the Joint Chiefs of Staff. 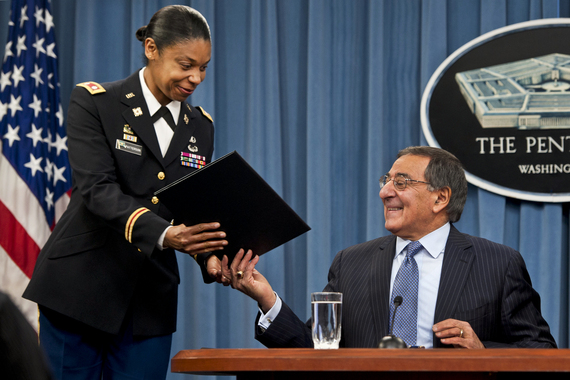 photo: Erin A. Kirk-Cuomo/Department of Defense