For a long time, two seemingly inconsistent phenomena coexisted, but few seemed to notice: First, the oft-reported experiments demonstrating sexist hiring practices, showing that when comparing hypothetical applicants for academic jobs, men and women prefer male candidates over identically-qualified women. Second, in contrast, hiring audits of who actually gets hired reveal that women are preferred over men; women apply less often for academic jobs but when they do, they are more likely to be hired. For example, during 2002-2004, 20% of applicants in mathematics were women, but 32% of those offered the job were women. 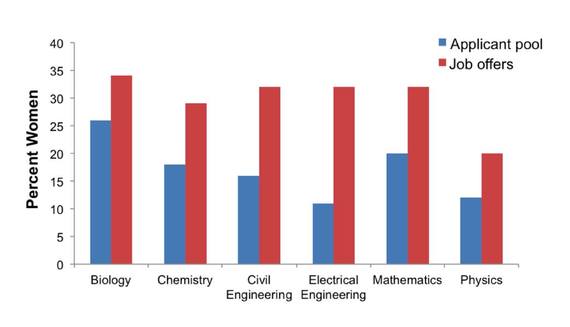 We reviewed a number of hiring audits (see here), showing that women were hired at the same or higher rate than men. This inconsistency between the experimental data and actual hiring data is glaring--and it led us to wonder whether women applicants are bypassed for men, or if the reverse is closer to the truth.

Some believe there is no inconsistency: They suggest women applying for professorial jobs may be stronger than their male competitors by dint of surviving a sexist winnowing process during which they have less psychological access to female mentors and role models. Thus, they conclude that women who later apply for professorships are superior to males who did not confront bias: "Perhaps the women who survive training in a field where they have few mentors and surmount barriers most men may have little knowledge of, might actually be better. At least we cannot assume they aren't." (link)

Many commentators attempt to reconcile the female advantage in actual hiring with the position that sexism is rampant in the hiring process. But we carried out an experiment to evaluate whether excellent women are bypassed in favor of men. If true, perhaps even more women should have been hired, were it not for sexist hiring practices. Sexism both before and after hiring is a separate issue, which we and others are studying elsewhere. But for the purposes of the present study, we focused on alleged bias at the point of hiring, and in the future we hope to report our examinations of bias at other timepoints.

In five national experiments, 873 tenure-track faculty in all 50 U.S. states, from 371 colleges/universities, chose among hypothetical tenure-track job finalists of both genders. A weighted statistical polling-type analysis was done, which considered the numbers of women and men in the faculty's departments, both for faculty who did and did not respond to our request to rank candidates. This polling approach meant that our results generalize to the population of U.S. STEM faculty in the departments we studied. In most contests, there was a male and female applicant who were identically qualified. A third hypothetical applicant was slightly less accomplished, helping to mask the fact that this was a test of preference between equally-accomplished men and women.

Applicants were described with different personalities to suggest the experiment was about preference for one persona over the other. One candidate was described as socially skilled and creative while the other, albeit possessing equal accomplishments, was described as an analytic powerhouse. These personae were systematically swapped across gender of applicants, so some faculty got the woman described as creative and socially-skilled and other faculty got her described as analytic and a powerhouse, and vice versa for male applicants, balanced across both genders of faculty. Many faculty wrote, justifying why they preferred a creative or socially-skilled colleague over an analytical powerhouse, confirming they believed this was the purpose of the study. A subgroup of faculty were asked to guess the purpose of the experiment but they were unable to do this, most opining it was a test of their preference between creative and analytical applicants.

What we found surprised us: The woman was preferred on average 2-to-1 over the identically-qualified man. This strong preference for the female finalist was true in nearly all of the conditions and lifestyles we examined--married, single, divorced, with or without children, recipient of family leave or not. And she was preferred by faculty of both genders and from all four fields. The only exception was male economists; they had no statistical preference for either sex applicant. So, it does not appear that women who are preferred in large-scale hiring analyses were chosen over their male counterparts because they were stronger than males, since women in all five of our experiments were preferred by faculty even when their male counterparts were identically strong.

Unsurprisingly, our findings were not greeted with uniform enthusiasm (see here). Some men do not welcome what they perceive to be reverse discrimination. Some gender advocates were less than welcoming, too, worrying that messages stating this is a propitious time for talented young women to apply for professorial jobs may lull administrators into believing the underrepresentation of women in some fields is no longer in need of intervention.

Elsewhere we have studied the developmental trajectories of men and women to identify barriers and challenges (see here). We do not believe women's underrepresentation in math-based science fields will disappear on its own, and we do believe women face hurdles that men do not. But our experiments convince us that the point of hiring is not one of them, and interventions surrounding it (e.g., gender awareness training for search committees that are common at universities across the US) have done their job; thus, resources should now be redirected towards solving other problems faced by women in the academy today. So for now, the obvious conclusion is that at the all-important point of applying for a first tenure-track post, women appear to enjoy an advantage over equivalently qualified men. In a later post, we will address criticisms some have raised about our study, and some ethical implications of our results.