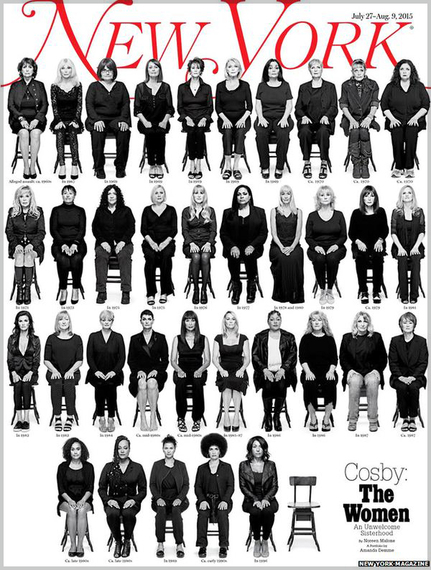 I just finished reading New York Magazine's devastating piece, 'I'm No Longer Afraid': 35 Women Tell Their Stories About Being Assaulted by Bill Cosby, and the Culture That Wouldn't Listen, a long title for a sad and sorry narrative that stretches over decades and has impacted the lives of so many women. I was left feeling battered as a reader (one can only guess how battered the victims felt), but beyond the discussion of what happens to Bill Cosby from here (something, right??), there percolates a larger conversation about how women--and men--view sex and power in this 21st century.

As a rapt observer of culture over the years, I've watched mores and sensibilities morph and change and, certainly on the topic of sex, have witnessed a mix of new attitudes with time-worn behaviors; progressive thinking alongside continuing sexist stereotypes; evolved men and women vs. neanderthals and passives. One hopes cultural advancements will ultimately render us a society of the sexually enlightened, and in some ways it has. But there remain antiquated notions about women and sex, some of which have come into high relief during this Cosby debacle, ideas that spring from a deep lack of understanding about what it is to be a woman in the modern world; what it is to be both desired and denigrated, sometimes in the same moment.

In covering stories about rape, assault, sexual harassment, and myriad other violations of the sexual kind, it becomes clear that, outside of the violent, sociopathic predator type, there are the "normal" guys, the "average" men, who "just didn't know that was considered rape." Or thought, somehow, that coercion was acceptable under certain circumstances. Or were just so narcissistic as to believe a woman's boundaries paled to a man's desires. Those would be the footballers of Steubenville, the apologists who believe "a man can't rape his wife," or the date-druggers who rationalize that an unconscious woman is fair game. Clearly sex, with its weighty baggage of need, impulse, power, and, far too often, criminal thinking, has yet to embrace true enlightenment.

Given that, women have to recalculate, readjust, rethink how we protect ourselves; how we keep out of physical and emotional danger, how we advance, grow, and expand our possibilities while still taking care to protect our flanks (sometimes literally!). When you read through the stories in New York Magazine, you become privy to an element of sexual politics that, likely, most women know and far too men can't/won't acknowledge: female powerlessness. Not necessarily of the physical kind -- that powerlessness is well understood: men are physically bigger, stronger, and can easily coerce a reluctant partner with sometimes very little force. We have no problem calling that rape or assault; we find it repugnant and see women as sympathetic victims in those cases, triggering legal recourse and cultural empathy.

The powerlessness I'm referring to is a more nuanced, subtle kind; less defined or understood. It involves a certain passive element of female imprinting, those subconscious gender proclivities and unspoken expectations we're buffeted by, the ones that lead women to self-negating decisions and behaviors that often demean and endanger them:

I know; all those sound hideous and deeply pathetic. Particularly the "mercy-f**k," which no man I know can possibly understand. But many women would recognize each and every one of those moments. Those and many others.

But why? Why are some women--even strong, intelligent, capable women--passive or stupid enough to get themselves into these situations? Some men, even some women (the rare few who've never experienced such things) can't understand it, offering suggestions (admonishments) like:

And I get it. Why wouldn't you think, do, believe, implement, insist upon all these things? You should. As a woman, a man, a person, you should. But what some don't get, what some can't fathom, is the conscious and/or unconscious genetic, biological, ancestral, sociological, cultural, and familial conditioning of women. The implanted "chip" of subservience, compliance, and passivity that was passed down from some post-goddess era, all the way through the "women as chattel, breeders, dutiful housewives" chapters, right up to current times when even the most liberated and powerful women still do the bulk of child raising and housework, are still considered unworthy of equal pay, equal opportunities, and equal domain over their reproductive organs, and are still labeled "bitches" if they wear their armor well. We may have come a long way, baby, but damn if we don't have a lot farther to go!

And into this cultural stew burrows the politics of sex. Of power. Of men and women. And somewhere between that and the damn "female chip," we've got little girls reluctantly going down on each other for the pleasure of their boyfriends; wives run ragged by the needs of domineering husbands; female executives treated like cheerleaders... and women who spent time with Bill Cosby.

When some first read about the Cosby accusers and asked, "Why did it take them so long to report anything?" "Why didn't they fight back at the time?" Why did some of them go back or stay within his circle?" "How could a strong woman not see ahead of time what he was up to?" "Why are they only coming out now?", it was clear the questioners, the naysayers, didn't fully grasp gender politics. Particularly those between a wealthy, well-regarded, famous, powerful, beloved man, and, well, a bunch of no-name (at the time) women. The power imbalance drips off that equation like so much battery acid.

But it doesn't take wealth and power to trigger those deeply embedded responses of sexual capitulation and acquiescence: mix any domineering, narcissistic, unevolved man (husband, boyfriend, boss, stranger) with a conflicted, passive, needy woman and you're right there. Most women I know have been "right there," more times than they'd like to admit.

There was a great line in The Girl With The Dragon Tattoo that stood out to me at the time and resonates with me still, one that, oddly, applies to this situation. It's at the point of the story where the male protagonist attempts to leave the killer's lair and, even though he has no doubt he's in danger, reenters when the killer invites him in. The killer, quite the astute observer of human nature, responds:

"Why don't people trust their instincts? They sense something is wrong, someone is walking too close behind them... You knew something was wrong, but you came back into the house. Did I force you, did I drag you in? No. All I had to do was offer you a drink. It's hard to believe that the fear of offending can be stronger than the fear of pain. But you know what? It is." [Emphasis added]

That line in bold is, to me, the crux of the issue here, the very thing women struggle against. Our fear of offending, of not doing the right thing, of being misunderstood or considered not "fun," not "game," not a "good team player." That fear is greater than our fear of pain. Of being violated. Of conceding where we don't want to concede. Of being overpowered.

That's got to change.

I have no idea what's going to happen to Bill Cosby. I hope something does. He's terrorized a lot of women throughout his life and there must be some kind of retribution for that. But whatever does or doesn't happen to him, I hope the good that results from these women finally, and bravely, sharing their chapters in this sordid tale includes these two things: 1.) A greater cultural understanding of the sexual pressures--subtle or otherwise--women endure in ways that men, largely, do not, and 2.) a growing awareness amongst women that they must never allow the "fear of offending" to push them past the lines of their personal boundaries. Ever. Under no circumstances.