(RNS) Nadia Bulkin, 27, the daughter of a Muslim father and a Christian mother, spends “zero time” thinking about God.

And she finds that among her friends — both guys and gals — many are just as spiritually disconnected.

Surveys have long shown women lead more active lives of faith than men, and that millennials are less interested than earlier generations. One in three now claim no religious identity.

What may be new is that more women, generation by generation, are moving in the direction of men — away from faith, religious commitment, even away from vaguely spiritual views like “a deep sense of wonder about the universe,” according to some surveys.

Michaela Bruzzese, 46, is a Mass-every-week Catholic, just like her mother, but she sees few of her Gen X peers in the pews.

“I have women friends who grew up Catholic who think my choice to stay Catholic is like I choose to keep believing in Santa Claus. They just don’t get what is in the church for me,” said Bruzzese.

“For me, Catholicism is a verb — it is the action of being in the world and trying to live the gospel,” said Bruzzese, who teaches theology at a Catholic high school in Albuquerque, N.M. Many of her students go home to parents who no longer observe the faith.

That fits with the findings of the Center for Applied Research in the Apostolate, which tracks Catholic faith and practice.

In 1974, CARA research found 46 percent of men and 45 percent of women considered themselves to be “strong Catholics.” By 2012, both groups had dropped significantly on that question — men to 24 percent and women to 30 percent.

On the rise: Those who call themselves “not very strong” Catholics. That self-description by men climbed to 67 percent in 2012, up from 44 percent 1974. Among women, 57 percent said their faith was “not very strong,” up from 43 percent 40 years ago.

Nadia Bulkin wears a silver triquetra necklace she bought for herself. She said it is a religious symbol used by both Christianity and paganism. She said: “I personally like it, because it signifies balance. I like the geometric appeal of it. It is also useful when I am questioned by very Christian religious people in Nebraska. They can assume it is the Holy Trinity, and I say, yeah, that’s what it is. Triquetra was used in this campy TV show called ‘Charmed,’ about witches living in San Francisco, and I love the show! That’s where I first saw it. It sort of symbolizes my weird relationship with pop spirituality."

Senior researcher Mark Gray, director of CARA polls, sees “some evidence of a closing ‘gender gap’ but I’m not sure how to disentangle this from life-cycle effects. It may be as women age they become more religious or spiritual and men do not (as much).”

Another survey — one that asked questions about spirituality — found significant differences between men and women and marked change between generations.

In the fall of 2014, the Public Religion Research Institute asked four spirituality questions as part of a larger survey on attitudes toward climate change.

Respondents were asked how frequently they sensed “a connection to all life”; a “deep inner peace or harmony”; ”a deep connection with nature and the earth”; and “a deep sense of wonder about the universe.”

Almost a third of Americans said these spiritual experiences were not a regular part of their lives. And each age group described themselves as experiencing less wonder and connection than the age group before.

While 49 percent of seniors (ages 65 and older) rated high on the spirituality index, only 29 percent of young adults (ages 18-29) did likewise.

And 44 percent of women scored high on the index but only 36 percent of men. 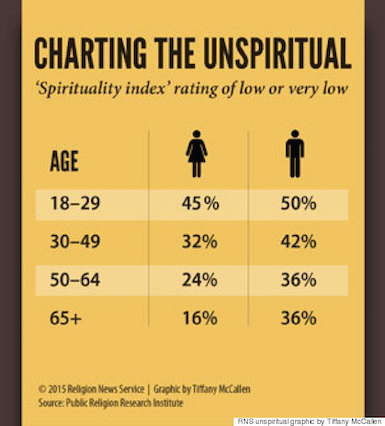 Bulkin scored especially low on those PRRI questions. “To talk about the attachment to the universe for me means thinking about science — it’s an intellectual connection,” she said.

Bulkin was born in Indonesia then moved to Nebraska when she was 11. Today, her mother, a self-proclaimed atheist, attends a Unitarian Universalist congregation. But Bulkin, a consultant in Washington, D.C., is more inclined to use her Sunday morning for a calming yoga class.

“Sometimes I do say I’m spiritual but not religious, but it depends on your definition,” said Bulkin. “I’m more an agnostic when I think about it. But I spend zero time thinking about it.”

Her male friends who do claim a religious identity are more culturally attached than religious, she said. “I know more girls who are religious Christians who struggle to find a guy who is the same.”

Juliet Vedral, 33, a pastor’s daughter who is active in her Christian faith, is enrolled in the Young Adult Life and Leadership Initiative at the Shalem Institute in Washington, D.C.

Vedral said her friends fall into roughly three groups: Religious (mostly women); spiritual but not religious (more women than men) and folks who are “not into it at all” (definitely more male).

At Shalem, most participants in its contemplative prayer and leadership programs are women “in the second half of life” said Leah Rampy, the executive director. Older women may have more time to participate, or they may be more willing to be part of institutional religion.

“Young people want their spirituality to be very personal, not corporate. It might be yoga or mindfulness or chanting but it has to be authentic and it has to work for them,” said Rampy.

This may be in part because “young men and young women are experiencing the world with less difference between their lives in the workplace and in education,” said sociologist of religion Cynthia Woolever. “All the same forces that would move men toward the ‘none’ category (away from brand-name religion) are present for women, too, now that whatever fence was around women is removed.” 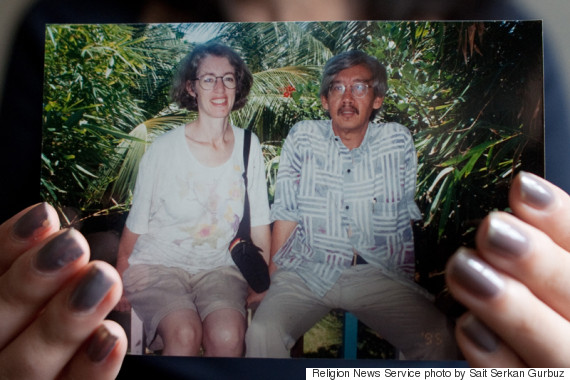 Nadia Bulkin holds a picture of her parents, Jan Hostetler, left, and Farchan Bulkin, taken in Indonesia. Her father died when she was 11 and her mother lives in Nebraska.

Woolever also points to the marriage rate as an influence in religiosity, if not necessarily spirituality. “It’s married women who go to church and they take their kids. Certainly single women go to church, too, but at a much lower rate,” said Woolever.

Protestant scholar and author Phyllis Tickle, 80, who has observed American spirituality for decades, also cited the changing cultural context of women’s lives.
“In evangelical and even in some progressive parts of Christianity, women are getting very mixed signals,” said Tickle. “There is a view that a woman should be subordinate on Sunday, equal to men the five workdays of the week and Saturday is up for grabs. She’s told at home and at church the man is to be the ‘servant leader,’ but then she goes to work where she has to be as tough as the guys to succeed.”

Tickle called it “religiously imposed schizophrenia. My generation didn’t have the pressure to be the perfect wife and the perfect professional. It doesn’t leave you any time for spirituality — or any internal time at all. Whatever the female of the 22nd century is going to be spiritually, we just don’t know,” Tickle said.

When Bruzzese looks ahead, she has no benchmarks for how her three young daughters might one day connect to a Catholic life as adults.

“I hope they live lives of faith that reflect the joy and the liberation promised by Jesus,” she said. But how they express this, and whether they follow her and their grandmother into Catholic church pews as adults, Bruzzese said, “is not up to me.”