Rebtel, a mobile VoIP company, commissioned a study from research firm Harris Interactive on the social networking habits of men and women. The researchers, who looked at the communication habits of 2,361 adults aged 18 and over, found that women are significantly more likely to use online social networks, like Facebook or twitter, to communicate with friends, family, and co-workers. A whopping 68 percent of women use social media to stay in touch with friends, as opposed to 54 percent of men.

"Our findings show that men tend to lag behind women when it comes to communicating with others through social media, which debunks other recent studies that suggest that men are more savvy networkers between the sexes," Rebtel's CEO Andreas Bernstrom said in a statement.

When the participants were asked which method of communication they would use if they were only allowed one, 18 percent of women chose social media as opposed to 12 percent of men. The rest still preferred to communicate via call, text, email, and even face to face.

The data showed that men like talking on the phone and texting more than women, but the difference was small: 73 percent of women use the phone to stay in touch with friends whereas 75 percent of men do. Not surprisingly, considering how deeply integrated Facebook is becoming with our lives, one in five participants said they expected to increase their use of social media in the future. Men especially expected their social media use to increase in the coming years, probably partly because, compared with women, relatively few of them use it now.

He may have been talking about LinkedIn's June study which found men to be the "Savviest Networkers." However, that study only looked at professional connections on LinkedIn, and didn't take into account other social networking sites or non work related connections.

On the other hand, according to a study by the Social Technology Review, women have an average of 55% more wall posts than men, but the same amount of friends.

Take a look at Rebtel's visualization of how much more likely women are to use social networking than men. 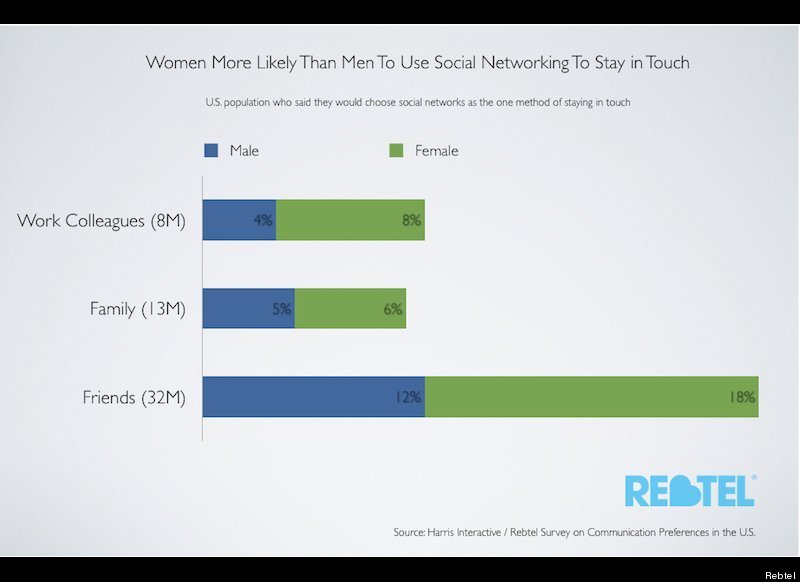