WASHINGTON -- Women veterans are more likely to be critical of the U.S. involvement in Iraq and Afghanistan than their male counterparts, according to a new survey by the Pew Research Center.

Sixty-three percent of female veterans say the war in Iraq was not "worth fighting," and 54 percent say the same of Afghanistan. Among male veterans, only 47 percent criticized the Iraq war and 39 percent disapproved of the efforts in Afghanistan, according to the poll.

Pew noted that the gender gap among veterans is wider than in the general public, where narrow majorities of both men and women believe the two wars were not worth fighting.

Kayla Williams is a linguist and former intelligence specialist in the U.S. Army, whose book Love My Rifle More Than You: Young and Female in the U.S. Army detailed her experiences during the 2003 invasion of Iraq.

She said she vividly remembered that her fellow service members' reactions the day after the 2004 election, when President George W. Bush beat Sen. John Kerry (D-Mass.), seemed in line with Pew's findings.

"The day after the election when I went to work -- and the first thing you do in the Army in the morning is PT, physical fitness training. Then I hit the showers and in the locker room -- all female -- the sentiment was universal," said Williams, who opposed the invasion of Iraq but went because it was her duty.

"All the females in the locker room who were showering said, 'Well, guess we're going to stay at war. Guess we're going to invade Iran next.' That was the sentiment. It was universally like, 'Oh, Bush got reelected. Now I'll have to tell my kids I'm going back to war.'"

The report by Pew researchers Eileen Patten and Kim Parker also found that compared to their male counterparts, a greater percentage of women in the military are black and fewer are married. They are less likely to have served in combat but experience "a similar mix of struggles and rewards upon returning to civilian life."

Since 1994, women have been barred from serving in units at the level of battalion and below that primarily engage in direct ground combat. They still, however, often find themselves in situations that require combat action.

Earlier this year, the Military Leadership Diversity Commission -- a high-level military advisory board established by Congress in 2009 -- recommended that the armed services overturn its policy barring women from serving in combat roles, a step that would remove a key structural barrier for women trying to advance their military careers.

Genevieve Chase, founder and executive director of American Women Veterans, wondered whether the differences in combat experience could affect men and women's views of the war.

"I'd be interested to see what percentage of those troops that believe the Iraq/Afghan wars were not worth fighting spent time outside the wire and in what capacities," she said. "Women make up less than 15% of the entire force and in deployment figures, that percentage is significantly lower especially if you factor in the number of women that have served outside of Forward Operating Bases, which would give them more of an opportunity to work among the locals."

As Chase noted, women currently make up 14.6 percent of the active-duty military. They also make up 16 percent of commissioned officers. A total of 138 female service members have been killed in the wars in Iraq and Afghanistan. 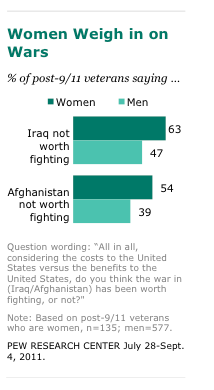