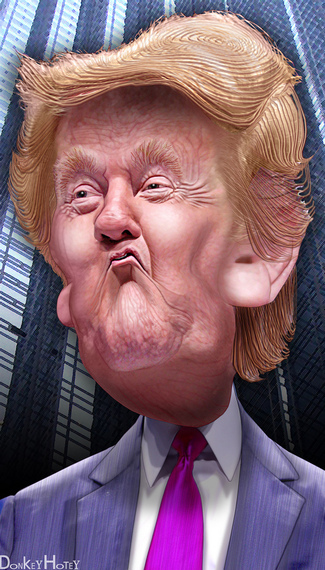 Yesterday I witnessed a five minute diatribe about why 'Merica needs Donald Trump as president, from a soft-spoken elderly southern gent. I tried to listen with as open a mind as possible, but that didn't last long.

The poor dude was essentially in mourning, saying that Trump can't win the election because women ("wimmin") control the vote. According to him, the only thing wimmin are concerned about is attractive hair, and if George Clooney ran, he'd be a shoe in because all the wimmin would vote for him. But since Clooney isn't running, all the wimmin will surely vote for Hilary Clinton, because she's got a vagina.

The pitch and pace of the man's venting rose as he went on to grieve that when our fine country was founded, the only people who could vote were male property owners, and since then there has been change after change leading right down to the mess we are in today.

He eventually petered out and moved on to talk about how the only good quality family TV programming he can find is on Country Music Television.

During this primary season, I've intentionally avoided the bickering, battling, and bellyaching. In this situation, however, I was trapped and had no choice but to listen to this ridiculous drivel.

Over the past few years I've witnessed some outrageous extremist views regarding homosexuality and same-sex marriage from people claiming to be Christians, and have gotten over my shock at the level of ignorance and disrespect spoken in the name of He who is love. I've seen enough of it to expect it, and have developed a sort of resigned acceptance, believing that time will pass and the condescending discrimination will soon be viewed as merely an embarrassing historical reality.

But this man's views rocked all that.

I'd assumed that denying African Americans the right to vote had become one of those historical disgraces. Surely by now every American agrees that disenfranchising a group of people based on race was wrong?

And surely every American knows that women have the same decision-making capacity as men, and that our right to participate in elections was long overdue.

Yesterday's experience showed me that not all of our fair citizens do think these things. My enforced listening to this man showed that there are people who question whether blacks should be able to vote, and who think that women's suffrage was bad for the country.

I'm still shocked and shaken. I'm ashamed that my elderly mother respects this guy, and finds his diatribes funny. I'm appalled that this ignorance has survived even though it's been over a century since race was removed as a voting criterion, and nearly a century since gender followed suit. I'm embarrassed by my own denial that this kind of bigotry is still in play. And I'm saddened for those who are in the midst of the discrimination battles that are currently underway; for people who continue to be denied the right to marry who they choose or to who don't have bathrooms that are safe to use because of their gender identification.