As I thought might happen, Obama won Tuesday by winning women and losing men, which hasn't occurred since 1996. Obama had a 10-point gender gap in the exit polls, and Gallup's own data show the largest gender gap they've ever seen. And in many Senate races, women alone sent women candidates to the Senate. Many commentators on the left and the right thanked/blamed Todd Akin and Richard Mourdock. But I'm not convinced the polling shows social issues are solely responsible for driving up the gender gap.

To be sure, social issues worked in Democrats' favor in this election. Six in ten (59%) of respondents in exit polls said abortion should be legal in most or all cases, and they broke to Obama by 2-to-1 (67%). More voters also expressed slightly more support for gay marriage (49% support, 46% oppose), with Obama doing as well with supporters as Romney did with opponents (3-to-1).

This is a big development. Recall back in 2004 exit polls a slim plurality said "moral issues" were most important to them. This provoked a lot of handwringing over Democrats' problem with "god, guns, and gays." And in 2010, exit polls showed a majority of voters opposed to abortion (53%), and Democratic House candidates did no better with pro-choice voters than with pro-life voters (48% for each).

But these results don't give Democrats a mandate to make social issues the focus of our campaigns any more than 2010's results were a mandate for Republicans to talk about social issues. That is to say: not at all.

In fact, women voters care about the same things men care about: the economy, jobs, and health care. In an election-night survey of voters nationally, with an oversample of Walmart moms, the social issues of abortion and gay marriage were distant vote drivers.

(The survey of 1600 voters and 432 Walmart moms was conducted by Republican firm Public Opinion Strategies, along with my firm, Momentum Analysis, and sponsored by Walmart. Walmart moms are defined as moms with kids under 18 living at home who have shopped at a Walmart at least once in the last month. See more of our past research here. The views in this post are my own.)

The table below shows responses to an open-ended question about what issues influenced voters' decision. (Issues with fewer responses omitted from this table.) A few points stick out at me:
•The economy and jobs dominate. For everyone.
•Health care and education appears to be more important to Walmart moms than to voters overall.
•Abortion is as important to pro-life voters as to pro-choice voters. But neither position is more important than the top tier set of issues.
•Note how far down the list the deficit and Medicare are. (A topic for a whole different post.) 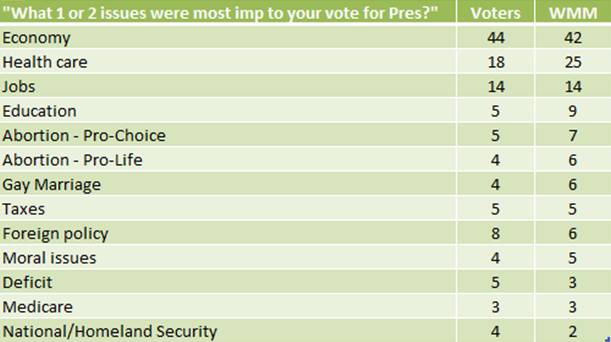 What three years of Walmart mom research (including nearly two dozen qualitative discussions and about a dozen different survey projects) tells me is moms want to feel their elected officials understand what their lives are like. Social issues, including a focus on social issues at the expense of the economy, run the risk of demonstrating candidates of both parties are out of touch. In focus groups, respondents frequently worried Washington "didn't have the sense of urgency" about the economy they do. In 2011 Walmart mom polling, moms worried about their household finances more than the nation's economy by 2-to-1. Among voters overall, concern was evenly divided.

And so it is the perception that Romney and Republican candidates were out of touch that mattered more than any check-off on abortion, gay marriage, or even the economy. In the official pool exit polls, a plurality said Obama's policies favor the middle class, while a majority said Romney's policies favor the rich. And a majority found Obama more in touch with people like them, while giving Romney a 1-point advantage on handling the economy.

Social issues of course are priorities for some voters. But they are not, on their own, determinative for most voters, even most women. This oft-quoted Gallup poll asked women voters about "the most important issue for women" (emphasis mine) while this Gallup poll showed a far different result when asked about the most important issue "for the country," and more closely mirrors our own election night polling. When women go to the polls, they are thinking about which candidate will fight for them personally, and that means quite a lot more than abortion. For candidates in both parties looking to continue to include women in the political conversation, this is an important lesson.