Did you know that if simply the women registered to vote actually voted, the impact would be decisive? Studies show that the female vote, if exercised, would be a game changer.

But as Alice Walker famously said, "The most common way people give up their power is by thinking they don't have any." Women's turnout rates on voting day are generally underwhelming if not downright appalling and if they again fail to turn out this Tuesday, the consequences could be dire.

With over 2000 pieces of anti-woman legislation introduced throughout the country since January of 2011, the situation for American women is definitely one of "high alert." From food stamps to education, from health care and reproductive rights to rates of female incarceration, from lack of enforcement of domestic violence and child support laws to sexual assault in the military, women ignore the full-out attack on their rights at great peril.

But lest you think I fault a lack of turnout to women's deliberate malaise or laziness, quite the opposite. The overwhelming majority of American women are completely ignorant to the systemic injustices that greatly affect their lives, liberty and ability to pursue happiness. Nowhere in our culture are we given any information about the glaring omission of women's civil and human rights in our foundational document.

In fact, we don't even teach women's history in March (our putative month, thank you so very much), let alone weave women into the public fabric of our national history throughout the year. And so, while a poll just came out that found 96% of Americans thought men and women were equal, 72% of them believed these rights to already be guaranteed by the US Constitution (which is not the case).

How can women make decisions that are in their best interests if they don't know that they are operating at a disadvantage? How can they understand how important it is to vote when they don't know what is at stake? Keeping citizens in the dark about their lack of rights and laws that directly affect them sends a body blow to our democracy and is a disgraceful civil rights violation.

While women make up the majority of the population of the United States and make over 85% of the purchasing decisions, they still make significantly less than their male counterparts for the same work, a direct consequence of a lack of equality under federal law and pervasive gender-based discrimination.

Kept on the hamster wheel making so much less money for the same work (Latinas dropped to 53 cents on the male dollar this year), feeling hopeless about being able to change anything-- women have not realized that they hold the key to their equality in their hands and that key begins with VOTING. 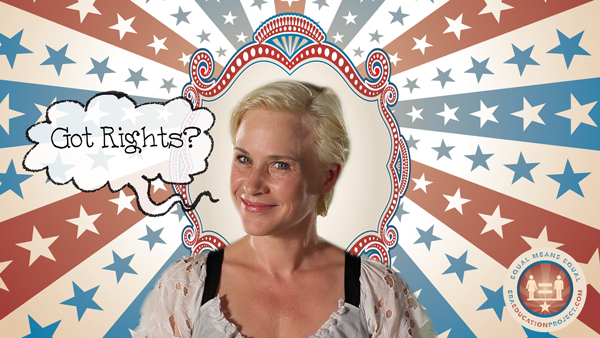 Voting is the single right guaranteed to women by the United States Constitution since its creation in 1787. The 19th Amendment, giving women the right to vote, was supposed to be the first step on the long road to full equality for women. It turned out to be the only step to date.

Women have to start using their vote to secure further rights for themselves. This is not a selfish mission, ladies. This is a matter of survival for our families, our communities, states, nation and ourselves. Legal equality under Federal Law is the a priori first step that American women must demand from their United States government. Without legal equality, American women are building their dreams on quicksand.

Restoring a balance of power would have profound impact on the largest issues threatening human survival: from abuse of the environment, to war, violence and poverty, there can be no doubt that increasing women's participation and valuing her voice would improve matters.

Whether you accept an argument so esoteric or prefer the reams of statistically-based evidence rooted in the economics [equality for women would put more economic resources (between 23% to 47% more) in the hands of women, a formula proven in multiple studies to improve the condition of the community as a whole], full legal equality for women is a necessary human and civil right that can no longer be denied us. We must demand it and we must not accept anything less.

Join the ERA Education Project's Challenge and commit to bringing 2 women to the polls with you on Tuesday.