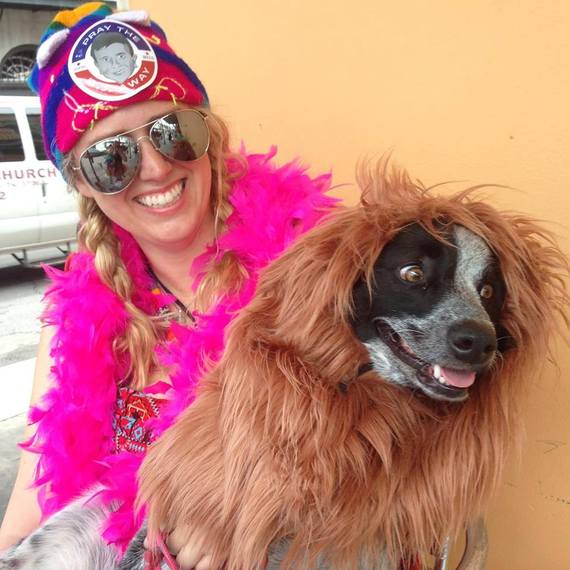 Some days I feel like I'm drowning. The stolen election. The incredibly offensive and frightening antics of the orange man. The hate that seems to be seething all around.

I find myself seeking solace in the written word. I look for groups and sites that are filled with words that are both fighting and uplifting. But more than anything, I look for smart women of words.

Allison Albert is one of those women.

She was raised amongst the Amish in one of the most conservative counties in the country. She calls herself a "serial entrepreneur." She launched her own CPA consultancy at age twenty-four and then moved to New Orleans and turned her attention to pet costumes. Her company, Pet Krewe, Albert explains, "works to unite kitties and canines of every stripe and breed, offering a full line of animal outfits for parades, parties, and box of wine Tuesday nights."

But with the politics that were brewing, she knew she had to do something else, something more, something to combat the messaging that threatens to at least engulf and at worst destroy. Enter Women who don't smile (WWDS), a site Albert launched just a week ago to create and share content that will hopefully lead the charge to change. 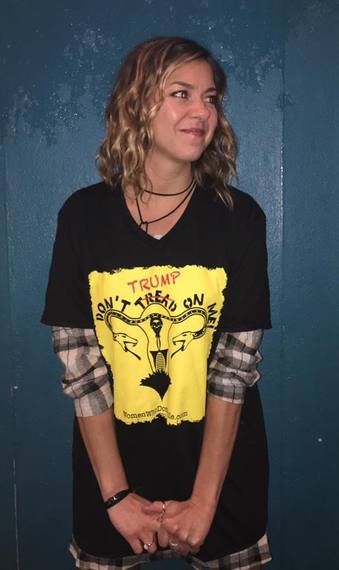 Allison in her Don't Trump on me tee

WWDS is a collaborative blogspace for people to share stories of their experiences as or with women in the workplace. It serves as a platform for women to express their concerns over gender-based workplace iniquity, and offer practical solutions. The site also provides an opportunity for those who still doubt such iniquities exist, often in humorous ways.

How did you come up with the name?

As women in male-dominated fields, we have repeatedly been subjected to our co-workers' notions of "proper" feminine behavior. The most common one being that women should be perky and pretty and always smiling, even while entering data into spreadsheets or changing a truck's oil. It is unacceptable that so many women across this nation be expected to giggle and grin to satisfy their boss's wishes for prettier workplace human scenery. We love to smile! Smiling is great -- but we do it when WE want to, on our terms.

What does that name mean to you?

A smile is a symbol; an indication of pleasure, affection, amusement, or desire. To require it of someone is to demand a demonstration of feelings that are often false. By claiming our own faces and refusing to smile on demand, we symbolically reclaim ownership over our entire bodies, declaring none have mastery over them but ourselves.

What inspired you to create this site?

Three women with a male boss who insisted we "whistle while we work", always with a smile, got fed up. It started with our weekly meetings in October of 2016 -- the "Women Who Don't Smile" lunch club, and it quickly grew into a desire to connect with other women who had dealt with similar working environments. We all came from different fields prior to the current job, and we marveled at the consistencies of bad behavior that ran through all of them. It was greatly reassuring to learn that we were not alone, and we know there are many more women out there who could use some some validation as well. All subscribers to the blog space are honorary members of the "Women Who Don't Smile Lunch Club."

What are you hoping this site will accomplish?

We hope this site will serve as a unifying agent for ALL women -- regardless of race, religion, or political affiliation. We're all in this together, and we can learn a great deal from each other's struggles.

Do you think you would have created this site if Hillary Clinton was President Elect?

Absolutely. We started the lunch club before the election, and even if Secretary Clinton had won, we would have continued with the site. Just as having our first black president did not eliminate racism in eight years, we are under no illusions that a female president would have ended all forms of gender-based inequality and harassment.

Do you have other people working with you on the site?

Yes -- we have many contributing writers predominantly from the Greater New Orleans area, and we are looking for input from across the country and around the world. Our site is open to posting articles pertaining to personal experiences, local, national, and international efforts to secure women's equality. Email us at womenwhodontsmile@gmail.com