Early 20th century French composer Nadia Boulanger once said: "A great work of art is made out of a combination of obedience and liberty." It is safe to say the first ladies of rock-n-roll were no classical composers, shoving obedience to the side as they pursued their own ways to be free in a field dominated by men. Scroll down for images. 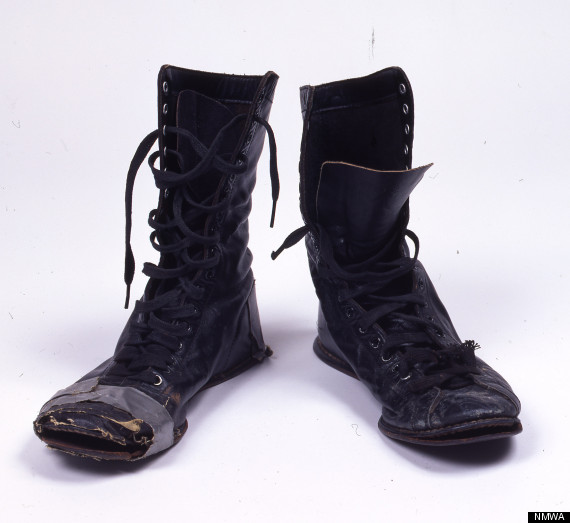 Whether a pair of studded combat boots or a studded corset, the icons of rock's female visionaries create an alternative timeline that sparkles, quite literally. A new exhibition entitled "Women Who Rock: Vision, Passion, Power," will honor the women who blazed the trail for rockers and feminists alike, beginning with those who made a place for women in the music industry, and ending with the ones who eventually took it over. From Billie Holiday to Britney Spears, the show will revisit doo-wop girls, pop princesses, punk rockers, soul queens, rockabilly crooners and a whole lot more.

"Women Who Rock" will explore how women furthered the evolution of rock-n-roll, and how rock-n-roll helped women advance their societal roles in return. With hand-written lyrics by pioneers like Patti Smith and Janis Joplin, we are reminded that our most worshipped rock goddesses are actually human beings. Then again, Madonna's cone bra and Tina Tuner's silver sequined dress depict how the scribbled words can elevate a musician from artist to icon. Whether you were raised on Stevie Nicks or Gwen Stefani, the combo of personal relics and iconic ensembles is enough to keep all ages interested.

The exhibition begins with Bessie Smith, dubbed 'The Empress of the Blues.' In the early 20th century the unknown talent began busking around her hometown of Chattanooga, Tennessee, before rising to fame for the vulnerable power of her vocals. Smith broke through norms in every sense, from her identity as one of the first female blues vocalists to her fluid sexuality.

The exhibition continues from the "Roots of Rock" onto a portion called "Get Outta that Kitchen, Rattle Those Pots and Pans: Rock and Roll Emerges." Female rockers burst onto the scene with an innocent yet unstoppable energy, visible in Ruth Brown's striped, ruffled dress, emblazoned with treble clefs and Wanda Jackson's acoustic (and of course bedazzled) guitar.

Continuing on we see the rise of the 1960's girl group, and thus the crazed teen fans that accompany it. Groups like the Shangri-Las emerged, somewhere between rebellious trendsetters and over-dramatic girl next door, while also beginning the love affair between music and fashion. Music's messages ranged from teenage trials to national issues in the 1970's, with some of the greatest female powerhouses like Janis Joplin, Joni Mitchell and Aretha Franklin. With the hippie movement in full bloom and birth control revolutionizing a woman's sexual freedom, this new power was pulsing all over. 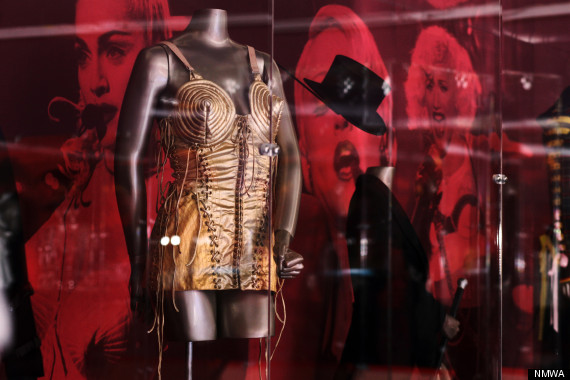 Enter disco, feminist rock, and then the punk and post-punk movements. Women were no longer just guest appearing in the narrative of American music -- they were starring in it. Punk innovators like Yoko Ono, Deborah Harry and Marianne Faithful render gender almost irrelevant as consumer interest takes the backseat to DIY creations. And then Madonna comes on the scene. Enthusiastically embodying the powers of her sexuality, she exposed the possibility of women taking control of their image and reaping the benefits of their desirability, paving the way for 90s icons like Britney Spears and Christina Aguilera.

The final aspect of the exhibition taps into the incredibly varied group of female musicians today, from Lady Gaga's shocktastic avant-garde antics to Queen Latifah's reign over rap. There is no single ending to the story of women and rock, rather the thread that has connected the exhibition frays out into infinite possibilities. You may not think Rihanna is the pinnacle of the feminist revolution, but seeing the Billboard Charts giant atop the timeline that Bessie Smith inaugurated a century ago highlights the huge strides necessary for the possibility of the Barbados chanteuse's takeover. You may not like all of the artists, you may even shudder at their being referred to as such, but the exhibition succeeds in showing their contributions to the evolution of women's roles, both in music and outside it. (Plus seeing Cher's floor-length headdress in person is reason enough to attend.)

As if there isn't enough to get excited about, Melissa Etheridge will perform an acoustic set as part of a benefit for the museum, receiving the National Museum of Women in the Arts Award for Excellence in the Performing Arts that night. You can purchase tickets to hear Etheridge's raspy power ballads in person on Sunday, November 4th at 7 p.m.

"Women Who Rock: Vision, Passion, Power" at the National Museum of Women in the Arts in Washington, D.C. will run from September 7, 2012 - January 6, 2013. See a preview of the costumes and instruments of the rock goddesses below, and let us know your favorites in the comments section.

More:
Female ArtistsVideoslideexpandnational museum of women in the artsArts