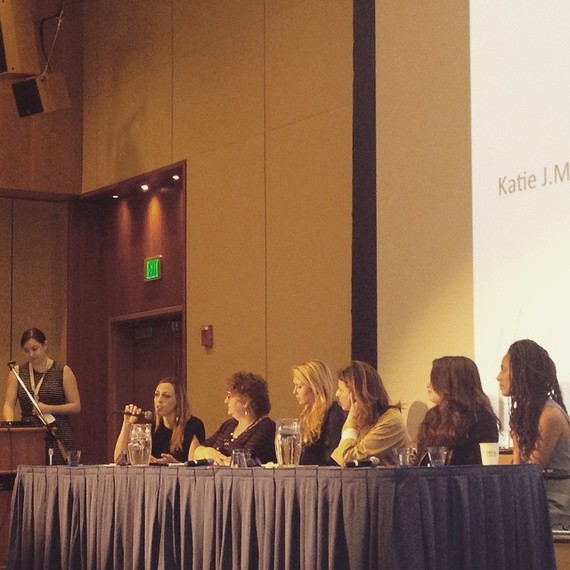 Six months ago, I impulsively cashed in some frequent flyer miles and bought a plane ticket to New York for a first-year conference I'd heard about on Twitter. It meant missing the last few days of a major work event I'd spent months helping to organize. It meant leaving my intern in charge of a monumental to-do list. It was a hasty, rash decision that involved quickly spending a few hundred dollars and making a phone call to my Manhattanite cousin to make sure I could, in fact, sleep on her floor. Buying that plane ticket to BinderCon was also the best decision I ever made. It was a decision informed by the kind of gut instinct that comes only when your life is about to change. Today I'm sitting in sunny Los Angeles, still buzzing from another amazing BinderCon weekend.

This iteration was the first to take place on the West Coast, cementing plans for future conferences to take place each Fall (New York) and Spring (LA). BinderCon LA felt extremely polished. There was nothing to indicate the event is not even a year old, nor was there the insecurity of a sophomore effort. Instead, it felt like a natural extension of the pop up female community created at BinderCon New York. There were a few key differences this time around-- notably a greater emphasis on programing for screenwriters. There were no major fumbles from the speakers, like Jill Abramson's lackluster remarks about the unique challenges for women of color in the news room that earned grumbles in New York. Instead, poet Claudia Rankine earned gasps and murmurs, oohs and ahhs from a room full of women who felt validated and affirmed by her remarks, who were overjoyed to be in the presence of a great writer.

This is perhaps the smartest aspect of BinderCon, for which co-founders Lux Alptraum and Liegh Stein deserve infinite credit. The programing at both BinderCons never panders to the female aspect of the conference, despite the fact it is specifically for women and gender non-conforming writers. Unlike other female centric events that feel a little precious about the whole lady thing, BinderCon sets a fantastic example for how things would operate if, like Beyonce sang it, girls ran the world. The speakers chosen, the workshops and panels slated, all would be equally applicable to the lives of male writers. From digging into the art of the personal essay or the legal and ethical implications of memoir to discussing how to approach grief and loss in the written word, there was very little on the schedule that felt like it had been selected just for women. The result is a collection of speakers who have broad appeal, like Claudia Rankine, whose remarks hit a variety of chords, no doubt slightly different notes and licks for each woman in the audience.

At the final program on the schedule, an "Unbind and Unwind" happy hour reception for attendees, women complimented one another on each other's shoes and sweaters, but also dove straight into casual conversations about identity politics, about which publishing houses know how to market Chicana writers, about what it's like to be queer AND southeast Asian. What I mean is this: all mixers involve small talk, but the small talk at BinderCon is a very different sort. It is possible to be unapologetically ones self at this conference in a way that it isn't at other professional events, or for many of the attendees (myself included), possible in one's everyday life. You could see this truth in the way the attendees carry themselves, how easily they slip into conversation with one another, even in the way they dress. One conference goer remarked to me that everyone seemed to have so much fun with their clothing, no doubt because so many attendees are freelancers whose usual uniform is leg gins or yoga pants, but also because BinderCon is a place where "you do you" is an implicit philosophy.

That was perhaps the uniting theme throughout the conference-- how to authentically use one's unique voice and share one's truth. How, through writing and publishing, women can live the mantra "you do you" unapologetically, boldly, bravely. A keynote delivered by Katie Orenstein of The OpEd Project led attendees through an exercise wherein they had two minutes to establish credibility on an area of expertise at the table. The takeaway was that it's important to give one's self permission to celebrate one's credentials, one's passions, one's authority on a subject, whether it's a talent for the oboe, elephant training, or sex-positive parenting (all of which were niches actually brought up in the exercise that demonstrate BinderCon's awesome diversity). There was also an important lesson there on how our expertise can positively affect others, placing a crucial emphasis on looking beyond one's own bliss to see how passion and commitment can benefit one's community. This takeaway was the smarty pants cousin of the maxim "be the change you want to see in the world."

Indeed, the existence of BinderCon itself is an exercise in modeling the change needed in the world. For two days every six months, women of all walks of life and backgrounds come together with two things in common-- the fact they identify as female, and that they identify as writers. From there they create a safe space, a collaborative space, a space where the catty competition so often encouraged between women falls away in favor of helping one another accomplish a variety of goals. For those two days, these women practice what the world could look like if there were true gender equality. BinderCon is a model of what life might look like if women were allowed to pursue their interests and their professions without being constantly reminded of their reproductive organs and their attendant stereotypes. The implications are exciting. After all, if it can be done four days a year on two coasts, it's only a matter of time until it's 365 days a year and everywhere in between.