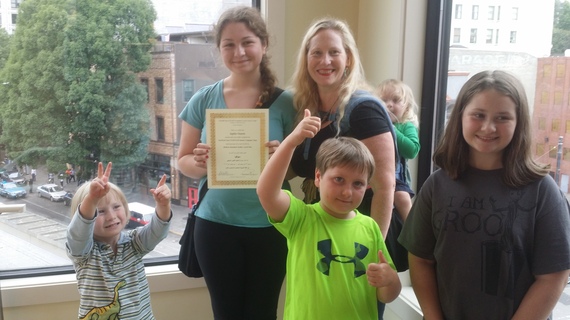 Whoever coined the phrase, "glass ceiling" isn't a mom to five, a host, chef, food blogger and columnist.

Another life ago, I inhabited Corporate America.

And, I love Hilary, she's wicked smart, a fighter, proven herself to be able to "put 18 million cracks in the glass ceiling" but she ain't me.

15 years ago I didn't "opt-out." I made a choice, to stay at home mom, but I never stopped pursuing my dreams.

A choice which has required more than just to "lean in", but also the ability to lean across, lean up, lean down and every which way.

Today, I yearn for more than "buzz words" to inspire women, for myself and my young daughters.

As a result, I don't read a lot of biographies written by women. When I'm looking for changelings to inspire me toward greatness, it doesn't matter the sex, I go for the story, which means I usually gravitate toward entrepreneurs and most of them are men.

I think there are plenty of women who have stories to inspire women to pursue their passions, but their voices aren't being heard or published nearly enough.

Of all my daughters' hopes and dreams, crashing through the "glass ceiling" of Corporate America has never been on the table as their hearts desire.

One of my daughters, who is eleven, wants to be an animator for Pixar, a PETA protestor, the president of a non-profit rabbit sanctuary, forensic psychologist and an award winning film maker. My eldest, newly minted 15 year-old-daughter wants to be a doctor, a polyglot, FBI agent and a humanitarian. She just finished a summer stint at One World Now to learn Arabic... While on a break in class she texted me this link regarding her choice not to shave her underarms.

Why is a glass ceiling still a litmus test in a woman's path to success?

I'm not disparaging the choice, I'm just tired, of being defined by it.

With or without society's blessing, I see myself as a high achieving woman: a woman who has chosen her own path in life...not just as a stay-at-home mom with five kids but also a writer, cook, host.

If Bruce Jenner was brave enough to come out as a woman, we should be able to lose the proverbial "shoulder pads" and come out as women...which means, we have arm pit hair, thongs aren't comfortable, we want to breast feed our children in public and for god's sake, achievement is not just measured by how far you climb up the corporate ladder.

I want to read about women of all shapes and sizes, with and without kids doing amazing things as human beings AND women!

I want to hear about women helping women...not tearing them down.

"You have five kids...I guess it's cheaper by the dozen!" "You gave up a career in corporate America to stay at home?" "You're a writer and host your own web series you must be a supermom!" "Aren't you afraid that you won't be relevant?" "Better hope your husband doesn't leave you."

What's interesting about these comments people have said to me over the years is that a majority of them have come from other women.

I often wonder if women on a whole felt more supported to pursue their dreams would they be more inclined to be supportive of other women?

For me, I have spent too much time replaying "the tapes" of those comments of not feeling supported by women, instead of focusing my energy on honoring those that have and do my part to reach out and help women in whatever ways that I can.

Recently, I was thanking the president of the Chamber of Commerce in my city, (a woman), who gave me a shot to host and produce a video series in my community.

When I thanked her for the opportunity and for opening her Rolodex of high profile people in my community to interview she said, "People are so worried about not sharing, afraid they won't get credit. Me, helping you is not a threat to me."

What men do really well is to help each other out, the proverbial "Boys Club" or "Good Ole Boys."

In my experience, women, could be more generous with each other.

I want to see and hear entrepreneurial origin stories of real women that I can relate too, like me, hairy, flawed, not supermoms, with the courage and self-confidence to do what they want, willing to accept the consequences and not being defined by what society considers to be success...now that's a book I would love to read and a woman I would love to support.

I teach my daughters, (and sons) the same thing, to be brave and go for their dreams whatever they are. This isn't a new concept, but they are watching their mother doing it and their father wholeheartedly supportive of it.