Recent polling shows women not voting for the so-called "Mama Grizzlies," and other Republican women candidates are no more likely to benefit from a gender gap than Democratic women candidates. In fact, the largest gaps in Democratic performance come in races where both candidates are women (the Oklahoma and New Mexico Governor's races). And Senator Murray and Alex Sink benefit from strong advantages among women, far more than Grizzlies Angle, Haley, or O'Donnell. 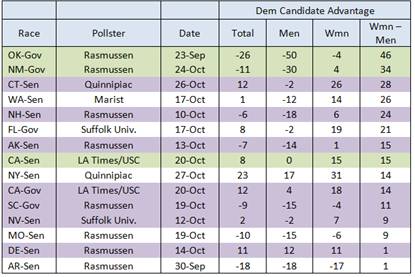 But just to make sure this isn't solely due to gender differences in party identification, we went to the crosstabs. Not many outlets release their party/gender crosstabs, but here's what we found from recent polls.

Taken together, these numbers suggest stronger Democratic candidates can probably thank women if they overperform party tendencies. And Republican women candidates cannot rely on gender alone to put them over the edge. As far as enthusiasm goes, it's possible women have become more engaged in recent weeks as Democrats have increased efforts to reach them. But recent polling showing women giving Republicans the advantage suggests there's still quite a bit of work left to do.