I grew up in a union family; both my parents were public sector workers. Even as a child, I was clear that my family was able to go to the AFSCME DC37 dental clinic because my mother was a member. My parents knew they'd receive regular wage increases, family health care, pensions and job security sufficient to invest in their futures: a house, kids, good schools, retirement, etc. In return, they paid payroll taxes and could contribute in a myriad of ways to their community.

All that resulted from belonging to a union.

Can people do well without belonging to a union? Sure. But it was near impossible before the rise of unions in the 1930s and it has been harder since the decline of unions in the '70s. A significant percentage of the population has been economically disadvantaged without unions. We know that the 40-year decline in unionization mirrors the 40-year increase in income gains of the top 10 percent -- the shifting of wealth from the middle class to the wealthy. Unions make a difference.

This is especially true for working women.

On this past 95th Women's Equality Day, the Institute for Women's Policy Research,(IWPR) just released a new report detailing The Union Advantage for Women. According to the report, unionization has declined in the U.S. overall but there's been a sharp increase in the participation of women.

The report points to the economic advantages that directly impact a woman's income and wealth accumulation. The most stark comparisons show that women in states with so-called "Right to Work" laws earn less, on average, than women living in the 25 states that ensure union members can have full union participation. Also, the wage gap between men and women is 88.7 percent for union women, compared to 78 percent on average. Union women also have a higher weekly wage, earning on average 30.9 percent more per week compared to nonunion women. Even higher gains are seen for Latino women and African American women -- always the lowest paid and having the largest wage gap -- compared with their non-union counterparts.

Like other reports detailing how unions make a difference, especially for women, with regard to paid sick days and access to paid family leave, this one shows that union women are more likely to have employer-sponsored healthcare benefits, and pensions. And, their higher wages increase the likelihood that union women can afford the growing costs of childcare that often are out of reach for many families.

And the union advantage doesn't end with retirement.

When my parents needed more support, their pensions led them to enjoy several of their "golden" years in assisted living facilities. Both my parents were able to combine their union negotiated healthcare with Medicare benefits to secure routine check-ups, and address critical care needed for Alzheimers, cancer treatment and a number of smaller health problems. In the end when my mother passed away, I found myself in her union's benefit office completing the paper work for her death benefit.

Union women don't ask for equality -- they demand it and through collective action create the conditions for achieving it. The rest of the nation should take note. 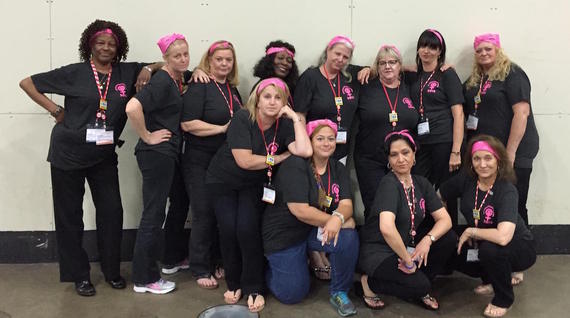 Director, Labor Project for Working Families in partnership with FV@W