Last week, I posted a piece called "What's happening to women's happiness?" in which I highlighted two longitudinal trends--a) women are less happy than they were forty years ago, as compared to men, and b) as women get older they get sadder--and I asked what might be causing these trends.

Some of you didn't think this was much to fuss over--"It's not depression or neurosis we're talking about here, it's only sadness." But many of you took these trends seriously--while a life of utter contentment is a fool's goal, who would ever wish on those they love a life of increasing unhappiness?--and, as you can see from the responses, thousands of you here and elsewhere offered explanations.

Obviously, no one explanation is entirely sufficient, and many are spiced with speculation. In this post, I'll take the five most-frequently asked questions and tell you what we know for certain.

Are these trends increasing or decreasing?

They are increasing. In the previous post, I presented Plagnol and Easterlin's graph showing that, according to the U.S. General Social Survey, women begin their lives more satisfied than men and then become less satisfied with every aspect of their lives as they age.

This used to be true. Today, women don't even begin their adult lives happier than men. Here's a graph showing the relative levels of life satisfaction of 430,000 12th graders, girls as compared to boys; boys' happiness is the constant black line. (This graph is taken from the Monitoring the Future survey data). 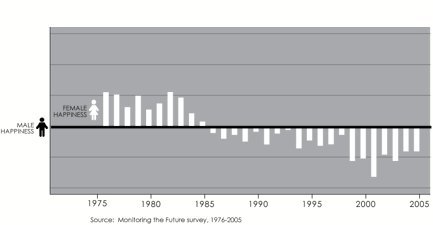 Yes, in Churchill's words, "There are lies, damned lies, and statistics," but still, it's hard not to look at this graph and conclude that contemporary life is disproportionately stressful for young women, that this stress puts them at an immediate disadvantage, and that this state of affairs is damaging, wasteful, and needless.

So, if you find it hard to relate to the gradual decline in women's happiness, if you always feel focused and successful, with plenty of energy and time, and what few doubts you have are quickly drowned out by the many moments of real fulfillment, well done to you.

Just know that, in aggregate, the next generation of women doesn't feel as you do.

What is causing men's happiness to rise?

Some of you looked at the gradual climb in men's happiness and wondered whether '"Feminism had benefitted men more than women." You may be right, though the data points the other way--in 1977, 35% of men in dual-earner couples reported feeling some kind of work/life conflict, whereas today 59% of men do.

However, we know what is causing men's slight increase in happiness and it's not Feminism. It's increased prosperity. Over the last 40 years, the Gross Domestic Product of the U.S. has climbed 3.1% per year and, though money neither buys nor sustains happiness for individuals, increases in national G.D.P. do correlate to increases in national levels of happiness.

This makes women's decline even more startling. The tide of prosperity should have raised everyone's spirits, but instead, women's have gradually sunk lower.

Are women simply more honest about their feelings?

Maybe. Maybe men, in aggregate, are emotionally closed off, out of touch with their true emotions, and so, though they are actually as unhappy as women, they just don't know it; or won't admit it.

But even if we accept this as true, surely it isn't a recent development. If emotional distance is simply part of being a man and emotional sensitivity is part of being a woman, these characteristics would have been as true 40 years ago as they supposedly are today. That would make them a constant. In which case it's hard to see how they could be the cause of these recent changes in women's happiness.

What we do know for certain is that women are harder on themselves than men. When nationally representative polls of women and men are asked the question, "Which do you think will help you be most successful in life, building on your strengths or fixing your weaknesses?" men split right down the middle, whereas 73% of women report they would focus on fixing their weaknesses. This too may be a constant--and I stress "may" be--but if it is, then it is a constant that creates a downward spiral of dissatisfaction. Since women, as a group, believe that success flows from drilling down into their weaknesses, and since, as has happened to women over the last 40 years, they've gradually acquired more and more domains in which they are supposed to succeed, a researcher would expect to see women characterizing themselves more and more by who they aren't, becoming more and more self-critical, and more aware of their flaws and failings, all of which might well accelerate these dissatisfaction trend-lines.

Are women unhappy because they are trying to become men?

Some of you suggested that what was causing the decline was women straying too far from their natural role as caretakers of the home and family, that, in a sense, women were better off 40 years ago, when the challenges of running a home and raising kids gave women a unique, valuable and, above all, focused role to play. (As I mentioned in my previous post, 42% of men and 39% of women do believe that it is natural for women to play this role.)

I have my own opinions on this: that while, for obvious reasons, women are compelled to make a greater biological investment in bearing and raising babies than men, this does not apply to raising toddlers and teenagers, nor to running the home, and that, even if it did, what is natural is not necessarily right. (It is natural for the strong to dominate the weak, but it is rarely moral.)

However, my opinions are beside the point. What we know for certain is that returning women to the role of primary caretaker won't make most women happier. We know this because whenever and wherever the research is done on this subject, the results are always the same: women with no kids are, in general, happier than women with kids. I realize this sounds perverse--who doesn't love their kids--and yet the research has been repeated so many times, in so many countries, there's no escaping it. Kids, it turns out, are a bundle of stress. They may give our lives trajectory, and meaning, and purpose, but their gift to us is not happiness. Of course, this does not apply to all women--some women feel as though they were put here for the sole and express purpose of raising their kids and nothing, no professional dream or accomplishment, can compare to the joy of this. What the data show, though, is that these women are in the minority.

And the kids appear to be aware of this. A recent study of a thousand 3rd-12th graders asked: "If you were granted one wish that would change the way that your mother's work affects your life, what would that wish be?" In a parallel study, their mothers were asked to guess what their children would wish for. Here's what they found: "Most mothers (56%) guessed that their children would wish for more time with them. In fact, only 10% of children made that wish. Their most frequent wish: 'I want my mom to be less stressed and tired' (34%)."

Why am I, a man, writing about this?

I'm writing about it because this is what I do. It is my area of expertise. I study groups of people who excel at something, examine the research, and draw conclusions.

I am not a housekeeper, but when I joined the Gallup Organization back in 1987, my first assignment was to design psychological tests to help Walt Disney World select more housekeepers like their best housekeepers. The initial step in the design process was to gather a small study group of the very best housekeepers and ask them questions to discover the traits or habits or insights they shared. So, imagine eight housekeepers sitting around a table, some nervous, others completely relaxed chatting away in English or Haitian Creole or Portuguese. One of them had been a housekeeper for only 18 months, while another had cleaned the same section of rooms in the same hotel for 23 years. They were of different races, sexes, and ages. They didn't know each other.

"Because," they explained, "that is the very first thing that a guest will do after a long day out. They will walk into the room, flop down on the bed and turn on the fan. If dust comes off the top of the fan, no matter how sparkling clean the rest of the room is, the guest might think it is as dirty as the top of the fan."

I love this phenomenon: that people who look very different on the surface, and who don't know each other, do actually share an insight or a practice or an approach, something you can discover by asking open-ended questions and then keeping quiet. I pursued this phenomenon with my next project, the study of the world's best managers, which eventually grew into my first book, First, Break All The Rules. From this research with great managers, I now know that when you ask them an open-ended question, such as, "What is the best way to motivate people?" they all say the same thing. "It depends on the person." And from this, and other similar questions, I also know that individualization is one of the practices shared by all great managers. I know this for certain, even though, as my team will attest, I am not a great manager.

Spurred by the data I shared in my previous post, and by a rather overwhelming outpouring of questions after an appearance on "The Oprah Show," I decided to take the same approach with women. If you could find the happiest and most successful women, women who had somehow bucked this downward trend in life satisfaction, women who had made life choices that strengthened them, who had become happier the older they got, if you could find these women and ask them questions and listen, what would you discover? Despite all their differences--of style, age, career, wealth, value system--what if anything would they have in common? What would they share?

I'll focus my next post on how we selected the study group and what we learned.

Marcus Buckingham is the bestselling author of five books, with more than 3.7 million copies in print, and the world's leading expert in personal strengths. An internationally renowned consultant and the founder of TMBC, a management consulting company, he has been hailed as a visionary by corporations such as Toyota, Coca-Cola, Microsoft, and Disney. Buckingham has been featured on "The Oprah Winfrey Show," "Larry King Live," "The Today Show," "Good Morning America," and "The View," and profiled in The New York Times, The Wall Street Journal, USA Today, Fortune, Fast Company, and Harvard Business Review. A Senior Researcher at Gallup Organization for nearly two decades, Buckingham addresses more than 250,000 people in live audiences each year and leads management training initiatives in organizations worldwide. His most recent book is Find Your Strongest Life (Thomas Nelson).

More:
healthy livinghappyhow to be happyHealthmen-and-happiness
Newsletter Sign Up
An essential daily guide to achieving the good life
Subscribe to our lifestyle email.
Successfully Subscribed!
Realness delivered to your inbox