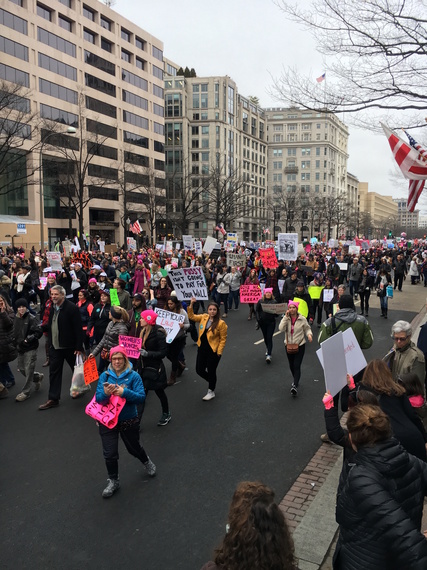 Who knew the Holy Spirit could roar like that?

I just got together with 2.9 million of my American sisters and brothers, the largest one-day demonstration in American history and never have I felt the immediate presence of the holiness of the human and divine spirit as much as on Saturday, January 21, 2017.

We roared. Just spontaneously. We shouted just for the joy of letting our voices be heard.

We grieved the Trump administration's contempt for basic American constitutionally protected freedoms. And we pushed back against the constant lying with truth.

But mostly we celebrated the birth of a new American civil rights movement, one where it is the very diversity of races, genders, sexual orientations, national origins, religions and humanist values that is what actually makes this country great and makes movements strong and resilient. As many of the signs said, "Hate does not make us Great."

Yes, we still have a long way to go in overcoming the entrenched privilege of whiteness, of heterosexuality, of Christianity, and myths of Anglo Saxon origins, but as we say in the peace movement, "a conflict that cannot be seen cannot be overcome." At this march, so many I saw and talked with named racism, saw racism, denounced racism; named homophobia and critiqued it; and named Christian privilege and denounced it.

I am the veteran of many marches from protesting the Vietnam War to advocating for civil rights to LGBTQI equality. There has never been anything like this in my experience.

In the past, as a white person, I was "for" racial justice, or as a cisgender person I was "for" marriage equality and as a Christian I was "for" treating all faiths and humanism equally. No more. That will not stand. In this march it was becoming clearer to many that a chief barrier to the future of these United States has to be through confronting white supremacy. It has to be through confronting homophobia, misogyny, Islamophobia and xenophobia. No skipping that work. Not any more.

Here is a poster made by one of my grandsons for us to carry. 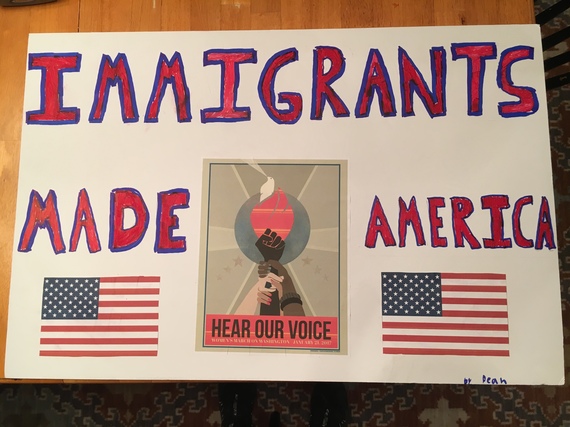 Let me be clear. We are not there yet. But the outlines of what has to be done are coming into view. I talked to a lot of people and found this was a profound desire for many, even while that paths to accomplish that may still not be clear for them.

For me it was also a family experience. I marched with the support of my husband, with my daughter-in-law, her mother, her brother and his fiancé. My son and his father-in-law took care of seven children so we could be there.

Here is another poster made by a grandson for us to carry: 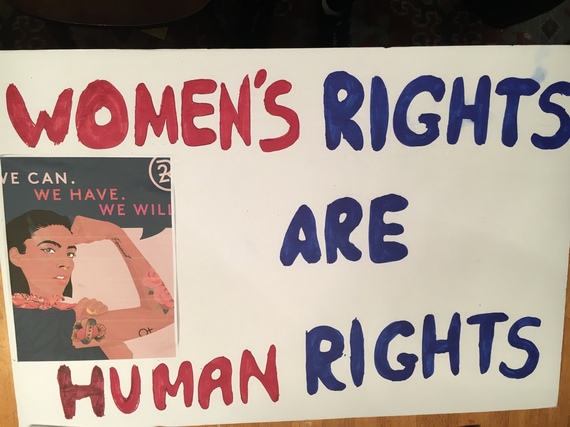 But it was also a faith commitment for me. Many of us met prior to the rally and march at First Congregational United Church of Christ in Washington D.C. to be commissioned and blessed.

Many Christians have a diminished and narrow view of the Holy Spirit, thinking of it only as the 'bird' that with Jesus and God forms the doctrine of the Trinity. Or, for many, the Holy Spirit is reduced to a personal spasm of spirituality, a manifestation like "speaking in tongues" that occurs in church.

But to me, the Holy Spirit blows where it will, and it is a spirit of communal resistance. During the Vietnam War resistance, my beloved teacher of theology, Frederick Herzog used to translate the Greek word for Holy Spirit, paraclete, as "draft counselor." The Holy Spirit, Fred believed, was the spirit of resistance to that terrible war.

The Holy Spirit was present in the Women's Marches, I am certain, as the spirit of resistance to hatred, to prejudice and to contempt for the well-being of humanity and the planet.

Lest this seem like continued Christian privilege on my part, I believe the Holy Spirit honors all faiths and humanist values, as this poster by another grandson shows. 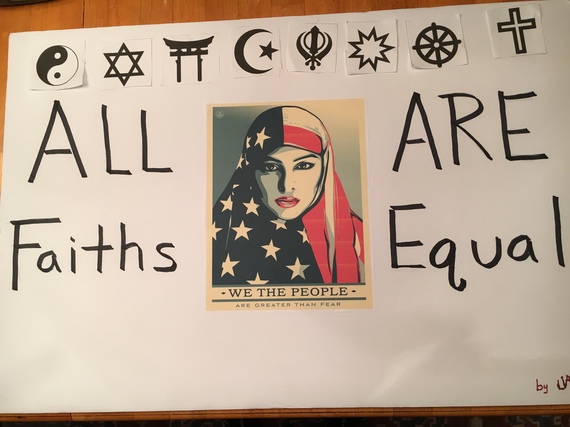 And the Holy Spirit lifts and guides the coming together of human and planetary resistance to the threats to our very existence.