The Women’s Mosque of America opened its doors on Friday in central Los Angeles, welcoming a crowd of Muslim women from around the country.

L.A.-based professionals M. Hasna Maznavi and Sana Muttalib serve as president and co-president of the mosque's board, respectively, and have worked with the rest of their team for months to bring the project to fruition. By day, Maznavi is a filmmaker and comedy writer, while Muttalib works as an attorney. They teamed up with the Pico Union Project, an interfaith worship space in Los Angeles, to house their mosque, and held the first juma’a, or Friday prayers, on Jan. 30. Edina Lekovic, the director of policy and programming at the Muslim Public Affairs Council, led the mosque’s inaugural khutbah, or sermon, and congregants were invited to join in a post-juma’a discussion and Q and A.

The Women’s Mosque is making its debut at a time when many American Muslims are questioning the traditions and norms they grew up with. The Chicago-based writer Hind Makki started a website in 2012 called “Side Entrances,” which invited women to post their photos and experiences at worship services. Mosques are often segregated by gender, sometimes with wall dividers marking off each area. Many women have expressed frustration at these divisions, and as Makki told NPR earlier this month, many men had no conception of the women's experience.

“The emergence of a female-only mosque is a natural outcome of the culture of female exclusion in mosques across the country,” Makki told The Huffington Post by email. “A female-only mosque empowers women to take ownership of religious scholarship and spirituality in a safe and welcoming space.”

HuffPost spoke with Maznavi and Muttalib about the process of opening a women’s-only mosque and what they see as the future of Muslim leadership in the U.S. Their answers were written and edited jointly except where noted otherwise.

Why, in your opinion, is a women's mosque necessary?

We believe that the Women's Mosque of America can play an important role in strengthening the Muslim community at large by increasing women's access to Islamic knowledge, encouraging female participation in existing mosques and fostering Islamic leadership and scholarship -- both within and outside of the Muslim community. The Women's Mosque of America seeks to provide an atmosphere in which Muslim women are surrounded by their peers and feel comfortable exploring more active leadership roles in a safe space.

What experiences in your own religious life led you to embark on the project?

Muttalib: As a young girl, my mother and father taught me that Islam was a religion that promoted equality among classes, races and sexes. With time, I realized that the egalitarian spirit of Islam that I loved so much was not always upheld or applied in Muslim spaces. When I reconnected with the Quran as a law student, I found that the text solidified my belief that Islam promotes the rights and equality of women. A closer look at Islamic history also made me realize that women played an important and strong role in throughout Islamic history.

Maznavi: As a young girl growing up in California’s largest mosque, I always felt welcomed and included. But once I left home and began exploring mosques outside of Southern California, I realized many mosques favored cultural practices of secluding women over Islamic practices of inclusion. It was hard not to internalize this disconnect in God’s houses as a lack of worthiness of my connection to God. I began studying under various female Islamic scholars across the country and found my studies transformative and incredibly empowering. 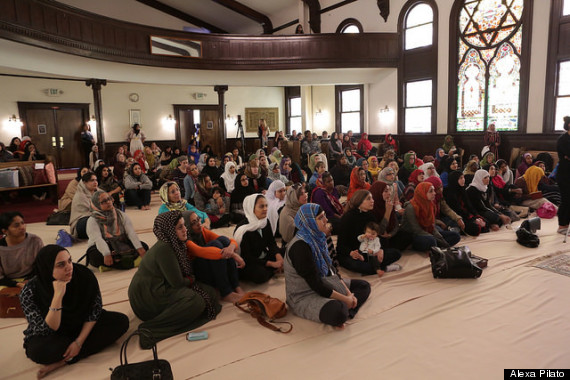 What has the process been like? Have you encountered roadblocks?

We were able to secure our venue through establishing a supportive partnership with the Pico Union Project in Los Angeles -- a beautiful multifaith synagogue that hosts six different religious groups, including Christians, Jews and now Muslims. We are honored to be the first Muslim group to join this wonderful multifaith effort toward peace and understanding between the Abrahamic faiths.

Though our planning process has been a largely positive one, the primary roadblock we face is that of securing funds to cover our operational costs. At the moment, the Women’s Mosque of America is a volunteer-run organization that depends on the goodwill of its volunteers and the generous contributions of supporters and congregants. Our hope is that we will be able to secure sufficient funding that will allow us to expand our programming.

What feedback have you gotten from men in your religious communities?

We have received numerous messages from men who have expressed that they are enthusiastic about our concept and are encouraging their mothers, sisters, wives, female friends and daughters to attend our first Friday prayer service. Specifically, we have heard from a number of young fathers who have told us they are grateful that their daughters can one day participate in a space like ours.

We also have two male board members who were so supportive about this idea that they personally wanted to become involved. One of them is the new father to a baby girl and wants her to grow up in a world where she has access to a space specifically designed to develop her nearness to God.

What elements of the new mosque are you most excited about?

We are most excited by the fact that a woman speaker, or khateeba, will be able to address women’s issues and concerns from a female perspective and with an all-female congregation. In most existing mosques, women do not often get a chance to access the male imam for questions or discussions after prayer, because he is in the men’s section and is inaccessible until a later time. The concept behind the post-juma’a conversation is to further facilitate meaningful conversations between the congregants and the khateeba, and to increase women’s access to productive discourse relating to faith and to Islamic scholars who can answer their questions and speak to their concerns. 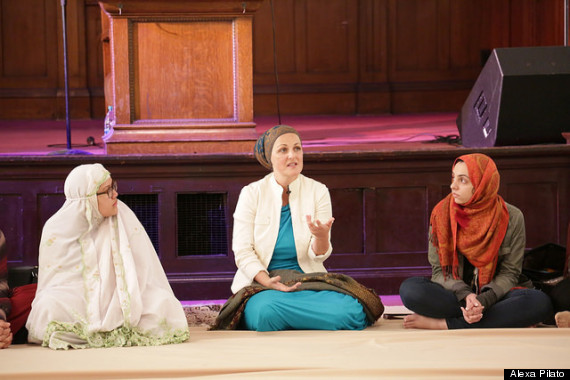 How do you envision the future of Muslim leadership in America?

We envision a future in which every Muslim conference is filled with equal numbers of female and male Muslim speakers and religious authorities, in which every mosque in America has an equal number of Muslim women and men on their board, and in which each mosque has full attendance by their entire congregant base because of the improvements they’ve made in making their mosques more inclusive and inviting for women. We also hope male imams will increase their access and availability to their female congregants -- particularly after juma’a prayer is over -- and that they will work with women in their congregations and on their boards in the planning process when designing the architecture and seating structure in their mosques.

Women's Mosque Opens In L.A. With A Vision For The Future Of Muslim-American Leadership
10 Muslim Women You Have To Know