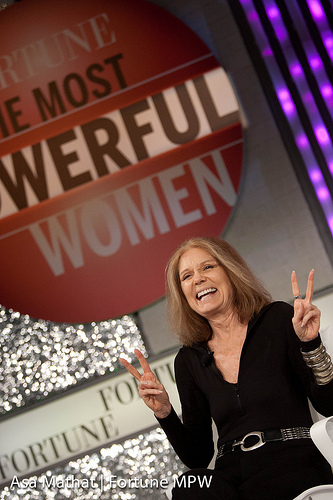 There has been a lot of talk lately about what's next for the women's movement. In fact, this past weekend in the New York Times, journalist Sarah Hepola asked the question, "Why, in 40 years, has no one emerged as Gloria Steinem's successor?"

I believe this is because we are going in a new direction with the women's movement. There is not just one voice that will lead this fourth wave of feminism. It is all of our voices. Each one of our voices is connected to our values, our beliefs, and our commitment to make our world a better place for our children and the next generations to come. I believe that as women, our voices are the most powerful tool we have to make change in our world.

Gloria Steinem emerged on the scene when many women felt silenced. They did not feel that their voice was respected in the workplace, in politics and even in their homes. While this is still the case for many women around the world, we are joining together as women to change this.

With the widespread accessibility of the Internet for blogging and social media, women are coming together to grow non-profit organizations to support women and girls (such as Women for Women International), create new ones (such as Women in the World Foundation) and launch campaigns to speak out against damaging images of women and girls in the media (such as Miss Representation).

Fourth wave feminism is not about "fighting for our rights." It is about coming into ourselves as leaders so that we never have to "fight" for anything. In our leadership, we will have the rights over our own body, our own health, our children's health, their education, and our voice.

What makes fourth wave feminism different, in my view, is the connection to feminine spirituality. While all women might not be on board with this, there is certainly a growing trend toward recognizing the Divine Feminine and the Goddess as representatives of the spiritual nature of women. With God the Father at the helm for 2,000 plus years, many women have lost their connection to their divine feminine nature. (Men too.) Without this spiritual connection to the feminine, it's hard to really value yourself at the same level as men since everything is skewed toward the divine masculine and masculine qualities.

To look at this more closely: A 2011 Gallup poll found that 90 percent of Americans have an image of God -- even those who don't believe in God -- and that image is overwhelmingly male. This of course influences how we think. Scientists have proven this over and over that perceptions affect our thinking, values and beliefs.

The good news is that this is changing with groups like The Goddess Collective, Feminine Power and The Yin Project. Women are coming together to reconnect with their spiritual selves in ways that are different from what you might find in a church or synagogue (and let's remember that women are not even allowed into some mosques). This, in effect, is giving women an inner authority and trust in themselves and their power. Instead of looking outside to Father God for acceptance and permission, women are looking inside to their own feminine nature for authority and guidance.

My guess is that every woman reading this will probably define it differently, and that's what is so exciting about this time. We are all coming to respect our own opinions and convictions and do not need others' approval to express these opinions.

To me, the advent of blogging and social media have made it possible for us to rise as women in a global sisterhood so that we are able to see that our causes in our own country -- or in our own neighborhood -- are connected to the causes of our sisters in other parts of the world. Every time a woman stands for what she believes in, it empowers all other women around the world. Think of Nobel Peace Prize winner Leymah Gbowee. In Liberia, she activated and then led a women's peace movement to confront Liberia's ruthless president and rebel warlords. The movement brought an end to civil war in Liberia and the election of Ellen Johnson Sirleaf, Africa's first female head of state. It also gave rise to a wave of women taking control of their political destiny around the world.

What's next for the women's movement? I think this next wave is about the integration of feminine spiritually with feminine sexuality and using our voices in a way that is true and in alignment with our feminine wisdom. I believe that equal human rights will emerge as we continue to support one another as women in leadership.

To launch your voice as a feminine leader making change in the world, visit Your Voice Now.