Few things in life are black and white.

For Wesaam Al-Badry, however, matters concerning human rights -- particularly those relating to women and children -- leave no room for negotiation.

A 28-year-old, Iraqi-born photojournalist who now calls Nebraska home, Al-Badry's childhood experiences helped mold his unrelenting perspective. His life struggles have left their indelible mark on his photography, which is a tribute to the strength and resiliency of women.

Al-Badry was 7 years old when the first Gulf War forced his family to flee their native Iraq in 1991 and seek refuge at a camp in Rafah, Saudi Arabia. He still recalls how his mother led him and his four siblings though knee-deep mud until they found protection.

From 1991 through 1994, he lived in the Saudi refugee camp where he shared a tent with his family. While his memories of that time are understandably grim, they are nevertheless complemented by his recollection of photojournalists who came to capture the camp's hopelessness with the aid of a camera.

"While growing up in a refugee camp, I felt a renewed sense of humanity's kindness when I saw photojournalists snap pictures that would bring help for the people living there in despair," reflects Al-Badry. "To me, they were my super heroes; they represented freedom, hope and inspiration."

And like most children who revere their heroes, Al-Badry aspired to be like the photojournalists he extolled.

"I got my first camera while still at the refugee camp and started taking pictures," remembers Al-Badry. "I was about 9 years old and I traded a bag of marbles, three VHS tapes and a new button-down shirt for a 35 millimeter camera with no film and a pair of Reebok basketball shoes with another kid at the refugee camp."

In 1994, Al-Badry's family moved to a refugee relocation center in Lincoln, Nebraska and shortly thereafter Al-Badry's father walked out on them, leaving his mother to care for five children in a new country on her own.

"I was fourteen, the eldest, and so it was understood that after my father left I would be the 'Man of the House," describes a contemplative Al-Badry. "I saw my mother's struggles and I was privy to all her stresses and anxieties. I saw how she learned to become an independent woman -- getting a driver's license, bank account and renting a home."

Today, Al-Badry devotes himself to his family and his photography.

Of a recent exhibit on Iraqi women refugees, which opened in August, he says, "I want to show that these women are not weak and oppressed as stereotyped by society -- they overcame adversity, war and culture shock to raise their families in new countries. Often, their husbands left or were killed in Iraq, leaving the women to act as the head of the family. The women lost a lot ... yet, they survived. My mother's fortitude and resilience allowed me to also survive and become the man I am today."

Al-Badry's exhibition of black and white portraits of Iraqi women received a warm reception and has attracted the support of venerable groups including Amnesty International and the ACLU. The groups have endorsed Al-Badry's work, sharing information about his exhibits and donating financially toward the refugee project..

"I used black and white film in a symbolic way to show that issues of human rights, women's rights, and refugee aid are 'black and white' -- as to say that humanity should get straight to the point and help others in need," elaborates Al-Badry.

While women are the focus of the first part of his project, the second concentrates on the ongoing suffering of Iraq's children orphaned by the war.

"As a child living in a refugee camp, I witnessed many of the atrocities -- rape, kidnappings, beatings and human trafficking -- that can befall these young victims. I experienced the sense of loss and upheaval, the sense of uncertainty that was prevalent. However, what I remember most is the strong feeling of trying to survive just one more day," says Al-Badry of his desire to capture and convey the desperate plight of these children.

Ultimately, Al-Badry hopes that his art will help challenge stereotypes and educate the international community regarding these realities. He also hopes it can facilitate a necessary dialogue between countries and cultures to move us toward a greater understanding and acceptance of one other.

"I live and hope to see humanity treat each other as human beings, regardless of race, sex or religion," he reflects.

No shades of gray there. 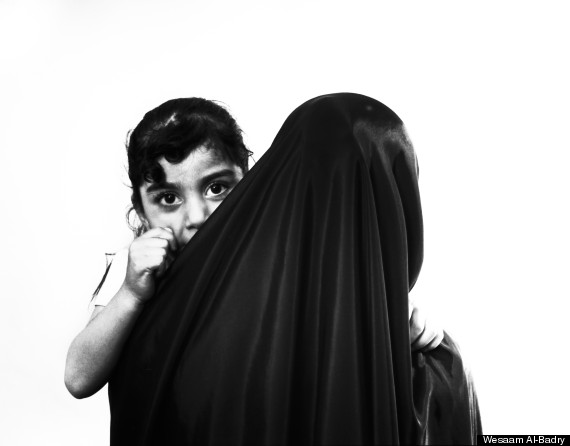 Engy Abdelkader is vice president of KARAMAH: Muslim Women Lawyers for Human Rights, and a Legal Fellow with the Institute for Social Policy and Understanding, a nonpartisan think tank based in Washington, DC. Wesaam Al-Badry's photos can be viewed at wesaamphoto.com. This is the second in an installment of posts featuring American Muslims in the Arts. This article was originally published by the Common Ground News Service (CGNews).