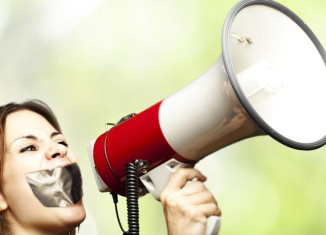 "Women's voices are being suppressed all over the world." Susan Rice, former U.S. Ambassador to the United Nations, speaking on foreign nations' practice of incarcerating women who speak out in dissent.

Research galore shows that organizations do better and get better results when their leadership is gender-diverse. That is true in part because the best decisions are made with a balance of masculine and feminine styles. I, for one, want women's and men's voices to be heard at the "big tables" where important policy issues are addressed - the environment, climate change, poverty and war to name a few.

In our western culture, in particular in the U.S. corporate world, women's voices are not "suppressed." But they are often not fully heard. Why not? Let me suggest four challenges, with the hope that awareness can help us better hear women's voices right here in the USA.

1. The feminine style of speech sounds less confident.
The average man speaks in a way to enhance status. He speaks in declarative sentences, sounding confident regardless of whether he has the facts or expertise. The average female values relationships more than status. She speaks more humbly, keeping herself equal with others rather than sounding superior. Even when sure of her point, a woman often disclaims, hedges and poses her point as a question.

In the business world, where the masculine style is the norm, the feminine style of speaking is heard as lacking in confidence. We associate confidence with competence - though the correlation is very weak. Deborah Tannen says there are two "languages" - "report talk" (masculine) and "rapport talk" (feminine). Only if we are "bilingual" can we be sure to hear the value expressed in a feminine style.

2. Women don't assert themselves until they really know.
Studies show that men apply for a job when they meet only 60% of the qualifications, but women apply only if they meet 100% of them. Paralleling this phenomenon, women may speak up when know they know what they are talking about. Taking greater risks, men may speak up when they actually know less. In other words, women may appear less confident because their internal threshold for confidence is different.

3. Women get "talked over."
If a woman speaks in a feminine style in a meeting, she is often "talked over." Sheryl Sandberg and Adam Grant addressed the question of why women remain quiet at work in their article about the challenges of "speaking while female." In my programs I find many women who have had the experience I have. I say something I think is valuable; I get no response; minutes later, a man says the very same thing - and is congratulated for his brilliance.

Men are more likely to have "assumed credibility," while women have to earn respect for their intelligence and competence. We may listen differently because we associate the male voice, more than the female voice, with authority. (This underlies the studies showing that men are promoted based on potential, women on results.)

4. Women who do speak up are penalized.
Women who speak and act assertively face the "double bind." If they speak in a feminine way, they are not seen as leaders. If they speak assertively and confidently, they may be judged differently than a man - e.g., "Who does she think she is?" This tightrope makes it riskier for a woman to speak.

My goal is to increase awareness of these challenges - so women's voices, as well as men's, are heard, loud and clear. If we assure we hear women's voices right here at home, we can make a difference for women who voices are truly suppressed. Business decisions will be better. The world will be better.