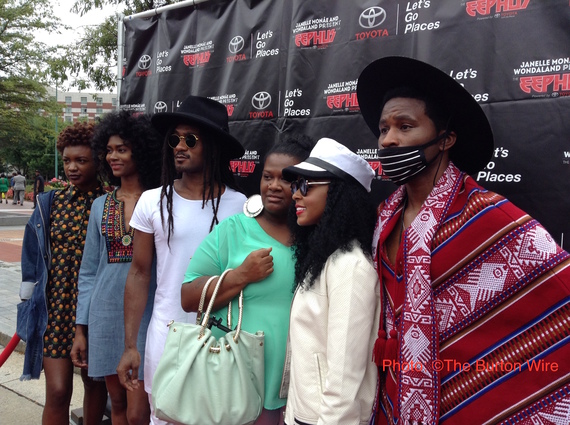 The members of Wondaland take a photo with a fan at Centennial Park in Atlanta.

In case you've been living under a rock, Wondaland is a musical collective composed of some of today's hottest musical acts including Janelle Monáe and Jidenna. It is also the name of a label headed by Monae, who counts Prince, Sean "Puffy" Combs, Big Boi from Outkast and Stevie Wonder as musical influences. In what is sure to be a super group, Wondaland consists of Deep Cotton (Nate 'Rocket' Wonder and Chuck Lightning), St. Beauty (Alex Belle and Isis Valentino), Roman GianArthur, Jidenna, whose hit song featuring GianArthur Classic Man, burned up the Hip-Hop and R&B charts and of course Monáe, who is also the iconic and award-winning label head giving new life to a music industry thought to be on life support. Monáe is an artist that can rock a music video, commercial, stage or venue like no one else, drawing love and support from a diverse group of musical elders, peers and fans alike.

Wondaland is Monáe's brainchild. She is creating "a new movement and space for the future of music and culture," says the Black Girls Rock award winner. The artist, whose style of music and performance is eclectic, is also a businesswoman partnering with a roster of artists to change the musical landscape of black music. Monáe has been in the press recently for having her microphone turned off during a Wondaland performance for NBC's Today Show when broaching the topic of police brutality. Wondaland was performing "Hell You Talmbout," a protest song, when Monáe was effectively silenced by having the microphone cut off and being talked over by a Today Show anchor just as she was saying, "We will not be silenced."

In keeping with not being silenced, Wondaland whose tour to promote their Wondaland album "The Eephus" returned to Atlanta, GA, the place where the collective was conceptualized in order to finish the final performance of the tour. Monáe discussed why this final concert was so important during a press conference held at Centennial Park in Atlanta. "This is where it all started. This is where Wondaland was founded and built, because of everyone in this community," says the musician. "Whether we saw you at a party or in the streets or a restaurant, you have inspired our music and the sounds of The Eephus."

Wondaland's connection to the community is on full-display at a Centennial Park community event, sponsored by Toyota, when scores of fans lined up to take pictures with the collective. Wondaland welcomed the fans with love and adoration, thanking them for their support and chatting them up to learn more about the members of "the community."

Wondaland's approach to their art evokes memories of Melvin Van Peebles' 1971 cinema classic, Sweet Sweetback's Baadasssss Song, in which a revolutionary, dressed like an outlaw, takes on the police and wins. Van Peebles states in the credits that the film is starring 'The Black Community," highlighting the link between pop culture, community and activism.

Roman GianArthur, who showed up dressed like a bandit, echoes the sentiments and consciousness of that period, marked by the Black Arts Movement. "We don't approach social justice as celebrities or artists, we approach these issues as human beings first and foremost. For us, it's a natural thing to do," says the multi-instrumentalist, songwriter, producer, and engineer.

"A lot of times you have artists that do whatever they feel and sometimes that means being in the studio all the time or on stage. That's fine for them, but we also feel like we have a duty to be in the community. This is the way that we choose to participate," he adds.

The style of Wondaland reflects the fashion of the 1960s as they show up looking like a motley crew of individual style that somehow works well together. Their presence speaks to historic moments when black art, fashion, music, film, literature, politics and activism collided to shift culture. One can think of the Harlem Renaissance or the Black Arts Movement (1960-1975), which is definitely an influence on the collective. Monae offers, "Our parents come from that era (The Black Arts Movement). We have family members who brought that history and culture to us. My roots are in the universe, but the black community has shaped and inspired all of us. It's just a part of our DNA, naturally."

Wondaland's black consciousness is in sync with the Black Lives Matter movement, a civil rights movement committed to social justice for people of color in the United States. Jidenna offers, "For us, the time that we're in right now in the country is an important one. We all recognize that and the importance for humanity to be able to look to each other and see the humanity in each other," says the Stanford graduate. "When we see each other and we see something different in each other, we look at that and should embrace it. That's something we always think about; the importance of embracing what makes you unique even if it makes others uncomfortable," he adds.

Wondaland is definitely a unique group that is embracing their individual identities to form a complex musical and cultural collective. The group's ability to use music, style and substance to bring about change in the music industry and society through the formation of a label is important. It is the business component of their charge that the group hopes will ensure their longevity and sustainability, which is what inspired Monáe to make the leap from artist to label head.

"Showing that we're not all monolithic, diversity is good, making positive jamming music with social awareness, all of those things. When I see that, I want to move on it," says the NAACP award winner. It was meeting the individual members of Wondaland that spurred the creation of the label. "I was just moved by being around these artists. I don't think I would have taken on that responsibility [as a label head] had I not met these individuals," she adds.

Hopefully Wondaland's formula for success -- great music, performance, social justice, activism and community awareness, will continue to make business sense for the collective committed to changing the world one LP at a time.


This article was written by Nsenga K. Burton, Ph.D., founder & editor-in-chief of the award-winning news blog The Burton Wire. Follow her on Twitter @Ntellectual or @TheBurtonWire.