Wonder Woman, the most iconic female superhero of all time, will appear on screen in the upcoming "Batman vs. Superman," played by Gal Gadot. Noah Berlatsky's 2014 book, Wonder Woman: Bondage and Feminism in the Marston/Peter Comics explores the Amazonian warrior's strange and fairly kinky origins. Not the character's origins on Paradise Island and her travel to the U.S., or her secret identity as Diana Prince, an army nurse, or even being super in her red, white, and blue uniform and boots, with her magic lasso and invisible plane, but the comic book's even stranger origins, created by William Moulton Marston, the polyamorous Harvard Ph.D who invented the lie detector.

In an interview, Berlatsky told me about Marston and his ideas of Wonder Woman as a warrior for peace and an emblem of dominance through submission -- with more bondage and other sexual images than even the wildly overblown allegations of the notorious 1954 Congressional hearings on the dangers of comic books could comprehend.

Wonder Woman's creator, William Moulton Marston, was different in several important ways from the creators of most of the other superhero icons like Stan Lee and Jack Kirby. What was his background? Why would someone with such extensive academic credentials turn to comics to bring his ideas to the next generation?

Most superhero creators were working-class Jewish guys; Marston was a WASP with a Ph.D in psychology.

Though he had a fancy degree and a lot of cultural capital, Marston was downwardly mobile for a couple of reasons. The first was that he was a crank whose psychological theories were out of the academic mainstream. The second was that he was a polyamorist, who lived with two women -- his wife Elizabeth Marston and their lover, Olive Byrne. Byrne was much younger and worked with him as his student at one point, so there was a lot of potential scandal in his home life that could well have scuppered his academic career (Jill Lepore speculates about this at greater length in her book The Secret History of Wonder Woman.) 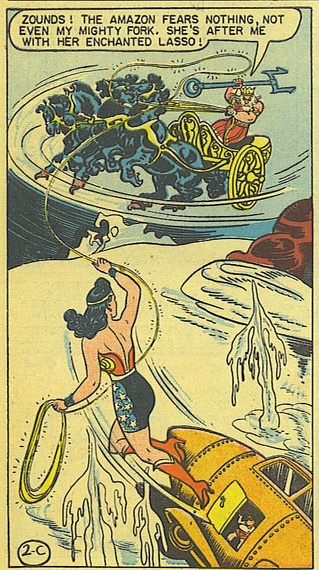 Did he consider himself a feminist? What did that mean to him?

I don't know if Marston used the word "feminist," but he certainly believed women should be equal, and even superior. He was part of an early twentieth century feminist milieu that included Margaret Sanger (Olive Byrne's aunt).

For Marston, feminism meant that women, and femininity, were superior. That's sort of in line with some strains of the suffragette movement, which thought that women were morally superior, and that women's votes would create a more moral world. However, the suffragettes had a very conventional sexual morality... whereas Marston did not.

What did artist Harry G. Peter contribute to the character?

It's difficult to know what Peter contributed to the themes or plots. He was connected to feminist networks himself, though, so there's reason to think he had at least some ideological interests in common with Marston.

Plus, Harry Peter is a great joke for a comic as sex-obsessed as the early Wonder Woman.

Was her lasso that forced anyone caught within it to tell the truth inspired by Marston's invention of the lie detector?

Nah. This gets repeated all the time, but there's nothing to it, largely because the lasso wasn't originally a lasso of truth. It was a much more useful lasso of control. If you were caught in it, you had to do anything Wonder Woman said. It got changed to a lasso of truth, maybe around the time of the 70s television show.

Lie detectors did show up in the original comic, but they were mostly machines. And of course in the comic they worked, while in reality lie detectors are totally worthless. (Ken Alder has a great book about early lie detection technology which discusses Marston a good bit; it's called The Lie Detectors.)

Bondage is a prevalent theme in Wonder Woman stories. Why do characters get tied up so often and what does it symbolize? Jill Lepore suggests in that it is inspired by the iconography of the women's suffrage movement. Do you agree?

Well, as I said, Marston had a messianic belief in the virtues of bondage. He also clearly thought it was sexy and fun. So, he put lots of bondage in his books because he figured his 12 and under audience would find bondage sexy and fun, and that it would teach them to lovingly submit to the matriarchy. (Both boys and girls were supposed to submit to the matriarchy; Marston was very aware of lesbian possibilities.)

I'm sure as Lepore says there was some nod to feminist iconography; Marston likes to show women breaking free of men's bonds. But...you know, the feminist iconography doesn't really explain why the comic is filled with mind control rays and giant pink tentacle bondage goo and women tying up women and for that matter women tying up giant female apes. Marston was into bondage for personal and ideological reasons which he discussed at some length in his theoretical writings. That's made various commenters (including Lepore) a little uncomfortable, but I think it's pretty hard to deny.

How are mothers and fathers portrayed in Wonder Woman?

Hah; there's not much portrayal of fathers in Wonder Woman. Marston (who was a father himself) doesn't care about them much.

Mothers though -- mothers are the thing. I think maybe the iconic portrayal of mothers is in the Sensation Comics story where Wonder Woman is in danger and Queen Hippolyte has to go save her. There's various ins and outs, but at one point Wonder Woman and Hippolyte wrestle, and Hippolyte wins.

That might come as a shock to later readers; Wonder Woman is generally shown as stronger than Hippolyte, or any Amazon in current canon. But it makes perfect sense for Marston. The only one more wonderful than Wonder Woman is Wonder Woman's mother. Because mothers are always best.

What do we learn from female friendships in Wonder Woman?

So, I think Wonder Woman teaches girls that other women are great, female community is powerful, and that lesbianism is fabulous. 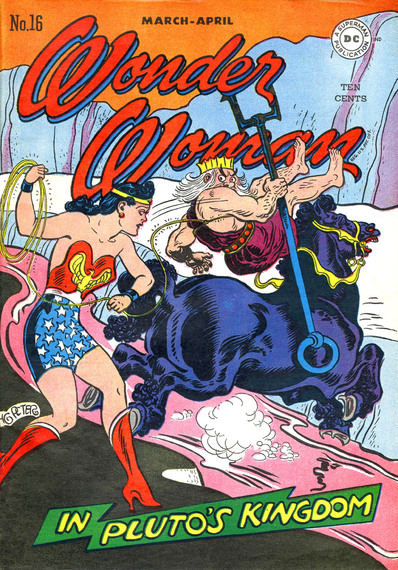 How does her origin story differ from the "other planet/exposure to some sort of radiation" stories of other superheroes?

Well, Wonder Woman was a bit different in that her origin doesn't depend on her being one of a kind. She is special in that she was made of clay by Hippolyte, and blessed by the Gods, but she comes from an entire community. She's super not just because of who she is, but because of who her friends and family are. And I think that's pretty significant in terms of the vision of female friendship we were just talking about. Part of what makes Wonder Woman super is that she comes from a community of women, who are super too.

You discuss themes of submission as counter to militarism and violence. How do we see that in Marston's portrayal of an Amazonian warrior?

Marston has various responses to the problem of violence -- but one of them is this image of the Amazon warrior as a fighter for peace. That worked especially well in World War II, since the U.S. was fighting a nation that was really aggressive and militaristic, so the idea of fighting for peace wasn't as contradictory or incoherent as it might be in other circumstances.

Marston also though used Wonder Woman as a way to think about substituting love for violence. Wonder Woman's weapon is a magic lasso, which Marston said was meant to represent female "oomph!" It's pretty clear the lasso is a yonic symbol, so Wonder Woman's power is to use the influence of female love to command men and women. That's a direct contrast to the usual hero power of hitting people. Again, Marston thought women should establish a matriarchy of peace ruled by love. Wonder Woman was his prototype for that.

Would you like to see the comic series return to the Marston/Peter version?

Well, that's not really possible, since Marston and Peter are dead, and the comic was I think inextricable from their particular genius. It's like asking if you'd like Elizabeth and Darcy to return to the Jane Austen version. It might be nice, but it's not going to happen.

I would love DC comics, or somebody, to put out a complete, affordable, respectful edition of the original run. As it is, the comics are difficult to find, and most people haven't read them. Which is a shame, because they're unique and bizarre and some of my favorite art of all time.