Is North Korea the next hottest tourist destination? Kim Jong Un seems to think so.

According to the South Korean newspaper Joongang Ilbo, North Korea's Supreme Leader has launched a major initiative to build a vacation resort in an industrial port town. The plan, which appears to have been put forth in a document entitled, "General blueprint for the Wonsan District," calls for the development of a beach resort on Songdowon Beach in Wonsan, a waterfront city that currently houses factories, dockyards, and a naval base. The project also includes plans to build a financial district and a sports and entertainment area.

The development plan is reportedly part of a broader push by Pyongyang to boost North Korea's tourism industry. Back in May, the state-run Korean Central News Agency released a series of photos of Kim visiting a construction site at Masik Pass, a snowy hill about 12 miles from Wonsan that is being developed into a ski resort, CNN reports.

The visit came less than a week after the town of Sinuiju, located on the North Korea-China border, opened to western tourists for the first time ever, AFP notes.

That the notoriously isolated country may open up to foreigners might not come as such a surprise. There are obvious economic benefits to expanding North Korea's niche tourism industry, which attracts just 4,000 to 5,000 western travelers a year, according to AFP. In addition, Kim may be more positive towards the idea of western visitors than his rhetoric often leads to believe, as the Dear Leader is thought to have spent some of his early years at a posh boarding school in ski-haven Switzerland.

In fact, the Wall Street Journal notes that it was Kim's father and predecessor, Kim Jong Il, who first opened a ski resort in 1998 as a joint venture with the South at a time in which inter-Korean relations had begun to soften. The resort at Mount Kumgang closed in 2008, however, after a North Korean soldier fatally shot a South Korean tourist outside the complex.

Citing recently declassified statements Kim made during the 2007 Inter-Korea Summit, Joongang Ilbo speculates that the Kumgang resort could have inspired Kim to further develop the country's tourism industry.

"Wonsan is a holiday destination," Kim reportedly told former South Korean president Roh Moo Hyun, adding that he planned to deindustrialize the area and close the town's factories and shipyards.

While the document on the Wonsan development didn't include a timetable for construction, unnamed sources told Joongang that the project is contingent upon foreign investment, with North Korea currently trying to woo $1 million from a company in Singapore. 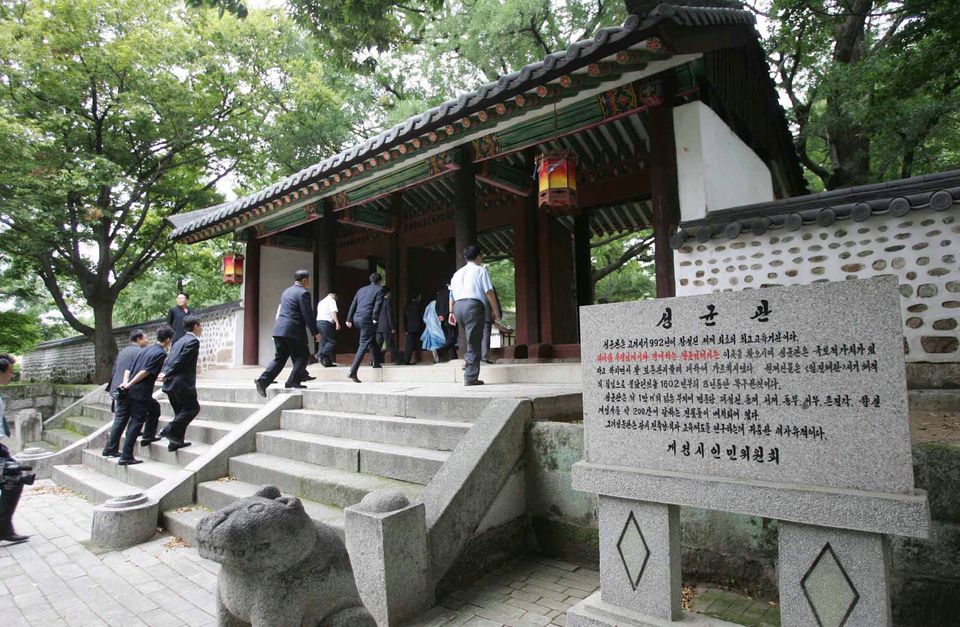 1 / 7
In this undated photo, visitors go up the stairs at Koryo Songgyungwan in Kaesong, North Korea. The remains of a fortress that once surrounded Kaesong, the ancient capital of Korea's Koryo Dynasty, is among sites in North Korea that made it onto UNESCO's World Heritage list on Sunday, June 23, 2013. (AP Photo/Yonhap)
AP