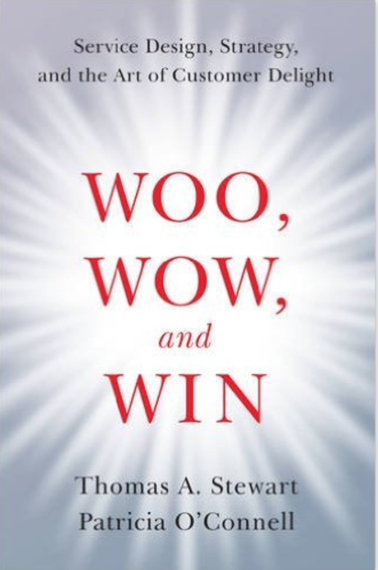 In their new book, Thomas A. Stewart and Patricia O'Connell explain the art, strategy and vital necessity of building customer service into the fundamental structure of a company. Woo, Wow, and Win: Service Design, Strategy, and the Art of Customer Delight is an insightful, practical, and, yes, often delightful guide to creating services that turn customers into loyal, enthusiastic fans.

Rule number one of business is that the customer is always right. But you argue that what is more important is identifying the right customer. Why and how do you do that?

TAS: The history of that "rule" is interesting. It appeared on both sides of the Atlantic at about the time big department stores emerged, and it was a slogan that was used to remind help not to be rude. It's about manners. It's not about strategy.

POC: It makes no sense for a company or business of any kind to twist itself in knots or distort itself to try to serve a customer or client that is asking for things that aren't part of its value proposition. That's where it becomes about strategy.

TAS: There are many ways in which companies are tempted away from focusing on their right customer, their sweet spot. The pressure to grow, for example, can cause companies to lose focus. It's very hard to say "no" to potential customers. In some cases, it's illegal--and it should be. But when a customer or client isn't the right fit, you can steer them, often directly. I know of a bank that sat down with customers who weren't profitable, showed the data, and quite directly said that the bank couldn't continue to serve them unless the relationship became profitable. Some customers left. Others brought new, profitable business to the bank so as to continue the relationship.

Why do you emphasize or at least use the language of design rather than culture?

TAS: Culture is a living, breathing thing, but it's an end-product--a response to stimuli--and it's almost impossible to manage directly. If there were country songs about business, "I fought the culture and the culture won" would be permanently on the top of the charts. If you get the design right, the culture will start to shift in the direction you want.

You don't get great customer experience solely by hiring nice people or exhorting them to be customer-centric. You get it by building service and experience into the structure and routines of the work. Whether it's ethics, manners, or quality, management should design an organization that makes doing the right thing easy.

You urge companies to get feedback from customers, which is great, but aren't customers today burned out on the endless series of questionnaires urged on them from every place they do business? Are those responses truly insightful and helpful?

TAS: We think most of those feedback forms are dumb. I fly Delta a lot, and after every flight I get the same questionnaire. If the flight was badly delayed, there's an opening sentence or two apologizing for the problem, but the questions are unchanged. I know what they're doing--collecting data for what's called a Net Promoter Score--but to pretend that it's a feedback survey is just ridiculous. Similarly, most hotel surveys are designed to check on employee behavior (did the receptionist smile? was your breakfast on time?), not customer experience.

Surveys can be a way to check a company's vital signs,but the real insights come from empathy--from deep studies of customer wants and needs and from walking in the customer's shoes. Cars have cup holders and make-up mirrors behind the visor because anthropologists working for Japanese car-makers went and watched what Americans do in their cars--juggling coffee and a donut on their way to work, putting on lipstick and mascara at traffic lights. That's design thinking!

POC: We created a Service Design Report Card. It allows companies to rate themselves on ten attributes of superior service, ranging from empathy to efficiency. There's an interactive version of it on our website. Companies looking for ways to improve their customer surveys might use that report card as the basis for developing feedback that will be more illuminating.

How has social media affected the way companies respond to their customers?

POC: Social media can be a great two-way communication tool - allowing not just a conversation between one customer and a company, but between the company and many customers. Yes, sometimes customers have to resort to embarrassing a company on social media to get attention, and customers shouldn't have to resort to that. I wonder if Delta would have decided to ban for life the person who was recorded doing a political rant - complete with obscenities - had that recording not gone viral?

But social media is not a weapon. If a customer goes online and complains about something they really don't have a right to - again, that goes back to the idea of your "right customer'' - a company shouldn't feel bullied into trying to make that customer happy.

Why does one of your sources refer to himself as "chief office of pain points?" Should every company have someone in that position?

POC: The Chief Officer of Pain Points--his real title is Chief Operating Officer of Mobile Mini, whose mobile storage units you can see at construction sites across the country--was trying to figure out what their customers' pain points were, and not just deal with them but eliminate the source - get to the root of the problem. And Mobile Mini has done that to a large extent. For example, the company had centralized its customer service line, but that turned out to be a bad idea. The temporary storage market is very local - customers wanted to speak with the people who knew them, knew the area, and were familiar with their specific issues.

Every company should have someone if not with that title with that role, and the goal should be eliminating the source of problems as much as possible. It's interesting. Just in the amount of shopping online I've been doing for the holidays, I'm noticing that I'm getting emails from the "Customer Care" department - not "Customer Service." Of course, a title change or a department name change doesn't matter if you haven't designed the service offering to back it up.

How do you make changes to stay innovative without alienating or confusing your loyal customers?

POC: You listen to customers, and you also listen to your frontline employees - the people who have the most contact with customers. Innovation is a process and should be constant, organic, and in line with what you do. It would confuse customers if a PR firm started offering accounting services - and would also make little strategic sense for the PR firm.

Also, you look at your competition - who may not be obvious. Are Starbucks and Dunkin' Donuts really competitors? We would argue no, even though they both serve coffee. Dunkin' is about getting people going - fast. So who else wants to do that? A gas station, a convenience store.

TAS: Innovation is different in services companies than in product companies. In the latter, it's likely to be concentrated in an R&D department. But service innovation can happen anywhere--in new offerings, which are like new products, but also in new "playbooks" for employees, new features and buttons on the website, and so on. Managing services innovation means looking for opportunities to improve at every touchpoint.

How important to customers are reputational issues not directly related to services, like sustainability?

POC: That can be part of a company's brand, which is also an aspect of strategy. Customers make choices based on a variety of reasons, and a company's values can certainly be among those reasons. But if the service component isn't there, a customer isn't likely to stick with you. They are coming to you to solve a problem, get a job done. If you can't solve their problem, they'll find someone who will.

TAS: Add ethics to the reputational issues that service design can support. Take Wells Fargo: There's nothing wrong with a strategy of cross-selling. Every bank wants to do that. But to do it right you want to design offerings that allow customers to see the value when they buy more - and also to allow customers to see what they are getting -- not by hectoring and harassing employees to sell, sell, sell. And certainly not by condoning fraud!

Do "your call is very important to us" phone trees cost more than they save?

TAS: Phone trees are one of my pet peeves. "Listen closely as our menu options have changed"--seriously? You changed them again? There's no reason why phone trees cannot be elegantly designed so that you can get quickly and painlessly to a person, if that's what you need, and not wade through so much junk that, by the time you get to a person, you need to vent for five minutes.

There was an article in the New York Times a few weeks ago that confirmed what I had long suspected: That tech support is sometimes deliberately designed to frustrate customers. I think of this as "SOL" customer service--you were stupid enough to buy from us, well, that's your problem.

A lot of what you write about is applicable to other relationships, even dating or workplaces. Have you ever thought of adapting it for other audiences?

TAS: Well, Nell, you're the "Movie Mom" and would probably advise that we make sure the original is a hit before planning the sequel, but, yes ...

POC: Shhh, that's the next book! But yes, you are correct, the principles do apply in all kinds of relationships, and also can help customers do a better job at their end of the relationship - and really, what the goal of a business should be is building a relationship with clients and customers. That moves it beyond a transaction, or even a series of transactions. If there's not the connective tissue of what we call customer capital, you don't have a relationship.