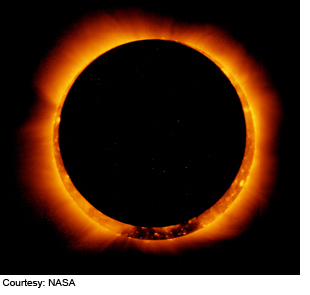 On December 8, The Roanoke-Chowan News-Herald reported that the Woodland, N.C. Town Council overwhelming rejected a proposal for a solar farm. The council later voted for a moratorium on all future solar farms.

In the course of reaching its decision, the council carefully considered expert testimony from concerned residents like Bobby Mann, who said that a solar farm would "suck up all the energy from the sun."

Though some suggest that Woodland may have suffered a total eclipse of the brain, I, for one, would like to offer my heartfelt thanks to the town for saving our planet.

Standing up in the face of logic and decades of evidence, Woodland has erected a barrier against the scourge of solar power -- sort of like the wall on the border of Texas and Mexico, except Woodland's wall keeps out sanity instead of immigrants.

Though the vast majority of environmental scientists believe that fossil fuels, not solar energy, present the greatest threat to Earth, anyone who has seen the latest installment of Star Wars, knows perfectly well what a menace sun-sucking technology represents. The First Order's big solar gulp Death Planet blew up the whole freakin' republic's star system like a high-octane Hindenburg. What more evidence do humans require to realize the imperative of halting the peril of solar energy?

Coincidentally, Woodland's decision to block solar power happened during the final week of the United Nations Climate Change Conference in Paris, where an agreement was struck to reduce global carbon emissions. When informed of Woodland's decision and Bobby Mann's solar flare, one delegate to the Paris accord, who spoke on condition of anonymity, replied, "If only we had known. We could have saved ourselves a lot of trouble with this stupid Paris accord thingy. All this time we've been worrying about global warming, when we should have been worrying about global darkness instead."

"Now the sun is going to go out and we're totally screwed," he added as he ducked into Aux Folies for a stiff drink.

Though Woodland has done its part to save the world, what about all the other solar arrays deployed around the globe, leaching the sun's precious energy as we speak?

With solar cells pulling over 14 quintillionths of the sun's power, why, it's a miracle the sun still has enough energy left to clear the horizon every morning. It's plainly apparent that we're all living on borrowed time. However, maybe, just maybe, thanks to the illuminated minds of Woodland, N.C., we all may enjoy daylight for just a little while longer.