We girls have a lot of power, electorally. For one, there are more of us: 52 percent of Americans are women, and 53 percent of voters are women. We are also the literal and metaphorical 'darlings' of the commentariat. Every election cycle yields a plethora of pre-election stories on on 'courting female voters' and 'wooing women.' Candidates' desire to win over our critical voting demographic is overshadowed only by the media's desire to identify the 'hot button' issues that will galvanize this group of voters into gathering our skirts and dashing for the nearest voting booth.

However, in their zealous focus on us ladies, pundits and political professionals alike seem to be overlooking another critical voter group in the run-up to the 2012 Presidential election: American males.

Is this perhaps because, as the smaller population, American males are deemed less critical to election outcomes when compared to females? Making up 48 percent of the population and a mere 47 percent of voters[1], American men are an overlooked but certainly important electoral group. Lots of commentary focuses on other key audiences that demographers and statisticians term 'subgroups' -- young people, Hispanics, retirees, etc. But you rarely see articles about 'wooing men' or 'winning the male vote' -- Google it[2]!

The fact is that men are, statistically and politically, in the minority in this country -- so why does everyone seem to act like women are? Don't men, as a minority subgroup, deserve just as much care and attention paid to their political proclivities and preferences, and to be on the receiving end of as much specialized electoral attention as women? Perhaps men would like to be wooed and courted as well!

In an effort to remedy this neglectful situation, I have undertaken a brief analysis of the American male voter, and attempted to identify some of the reasons for the marginalization of this particular group.

We know a few critical facts about the Male Voter thanks to the folks at the Census Bureau. It may not surprise you to discover that males who vote are...

... than the population of voting-age males as a whole. (The same is true for women, of course.)

There are certainly differences between men and women, politically speaking. A critical difference is that men are more likely to describe themselves as 'conservative' than women (62 percent men vs. 55 percent women), and are more likely to indicate they will vote Republican than are women (45 percent vs. 32 percent)[3]. Obama's election in 2008 was due in large part to the support he received from women (56 percent of women voted for Obama vs. 43 percent for McCain[4]). Men also report being more interested in following news about the election than women do (66 percent vs. 60 percent).

This is far from the whole story however. When analyzing the voting behavior of an under-researched population, one useful metric to examine is volatility: How 'steadfast' are men in their voting preferences? This is important because, in their quest to 'woo' voters, surely politicians will be eager to focus more on those individuals whose votes are least committed (this means they are more persuadable!). The volume of coverage about the need to 'woo' female voters might even lead one to extrapolate that the 'gentle sex' is also the more politically malleable.

Not so. Ipsos has been collecting 1,500-plus interviews per week for Thomson Reuters as part of our pre-election polling. The graph below[5] shows the weekly figures for our Voting Intention question (Obama vs. Romney), and provides a measure of voting volatility for both men and women. 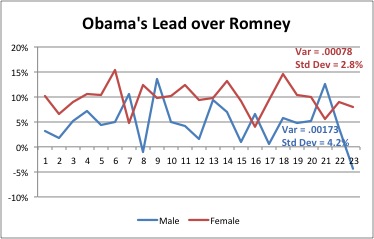 Men's volatility is almost double that of women's: 2.8 percent vs. 4.2 percent. Men, perversely it seems, are the more inconstant, woo-able voter, changing their minds as often as they change their boxers! (or briefs).

And, despite their elevated reported interest in politics, men are actually less likely to say they are certain they will vote (66 percent vs. 62 percent) and less likely to show up at the ballot box on election day (2008 voters comprised 53 percent women and 47 percent men).

But perhaps men and women simply have different political agendas -- this might explain some of their differing volatility. So the next metric I looked at is issue prioritization: what do men and women consider to be the biggest problems facing the country? Ipsos asks this question in an open-ended way (rather than by using a list of responses to choose from) in order to best assess the public's top-of-mind responses, and then categorizes them into broad groups. 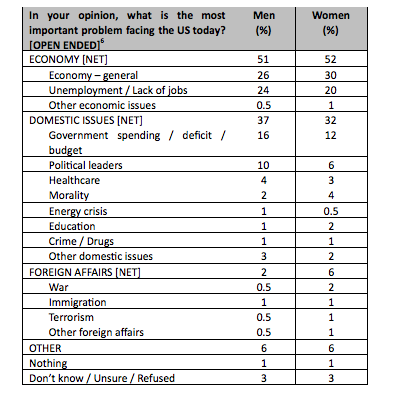 There is basically no difference in how men and women prioritize issues -- and the top issues of concern are identical for men and women. Men, it seems, care just as much about the economy, jobs, and healthcare as do women.

So why do women get all the 'wooing'!?

So why are women's political proclivities and voting behaviors treated as specialized and worthy of intensive scrutiny, while men's are virtually ignored and treated as 'the norm'? Why don't we see headlines like "Romney faces challenges wooing male voters" or news roundtables on "Courting male votes"? As Jezebel recently put it, "... where's the endless hashing and rehashing of data on the men's vote? Are female voters more fickle, more easily manipulated... Are men set in their ways while women ebb and flow like the tides... ?" The answer to this last question is 'no,' as the analysis above demonstrates.

Men, we have discovered, care about the same political issues as women but are more volatile in their party allegiances. There are fewer men AND they are less likely to vote: Women make up 52 percent of the population and 53 percent of voters. We hold the majority -- and yet we also get the 'special treatment' accorded to a minority subgroup while men languish in un-wooed and presumed 'majority' status.

The data I've laid out here suggests we should really be sharing, or even wholly transferring, ownership of our special 'subgroup' status to men. I suppose that by retaining our special minority label, we reap the benefits of special focus and attention from pundits and politicians -- we get wooed!

Perhaps it is out of generosity, then, that we have chosen to anoint males with all the positions of power in politics? In our modesty, we have chosen to elect only male presidents; to allow 82 percent of the House and 83 percent of the Senate to be male; and to ensure 88 percent of governors are men. It is testament to women's trust in the other sex that we choose not to harness the majority power of our vote and insist on a few more female candidates.

I guess as long as we continue to be treated like a minority subgroup, we'll keep acting like one.

[3] Data from an Ipsos poll conducted for Thomson Reuters from June 7-11, 2012. Ipsos surveyed a nationally representative, randomly selected sample of exactly 1,099 adults aged 18 and older across the United States via live telephone interviewing on landlines and cell phones. Margin of error +3.0; +4.0 for men and women.

[4] Edison Media Research/Mitofsky International based on questionnaires completed by 17,836 voters leaving 300 polling places around the nation on Election Day and 2,378 telephone interviews with absentee and early voters.

[6] Data from an Ipsos poll conducted for Thomson Reuters from July 8-11, 2011. For the survey, a nationally representative, randomly selected sample of exactly 1,173 adults aged 18 and older across the United States was interviewed by Ipsos via live telephone interviewing on landlines and cell phones. Interviews were carried out in English and Spanish. Margin of error +3.0; +4.0 for men and women.