Entering the mighty Guggenheim Museum on Fifth Avenue can be a spiritual experience for many of us, particularly when one is eagerly anticipating a riveting survey exhibition by Christopher Wool, an artist whose time has come. From Frank Lloyd Wright's archetypal skylights embedded seven stories above in Manhattan's most iconic building, filtered sunlight brilliantly streams down, creating a heavenly white-on-white atmosphere that prepares a visitor to be "beamed up" to a much higher level of perception. Many of the mostly black and white works by Wool peek over the spiraling "apple peel" balcony and invite the viewer to start their mission with one small graduated step for mankind. What follows is convincing forensic evidence that these were created by no ordinary artist. He has developed a striking collection of disparate images that expand upon an unusually intuitive intelligence and aptitude for assimilating one's environment and then tossing it out there, sewed together, entangled in innuendo and peppered with familiar encouraging street smarts.

This is a powerful and unforgettable show for sure, and ranks with some of the most memorable survey exhibitions at the museum in recent years, chiefly the John Chamberlain exhibition in 2012 that in many ways reflected the raw energy, adaptively re-used aesthetic and distinctively abstract, often swirling forms fashioned by Christopher Wool. Organized and brilliantly curated by Katherine Brinson, this ambitious exhibition, the most comprehensive examination of the artist's rigorous oeuvre ever, features more than ninety works that connect the dots in the examination and understanding of the major developments within Wool's distinctive career, from his early use of appropriated patterns and text to recent abstract pieces created through collage, erasure and digital manipulation.

Beginning in 1982 as an ambitious young artist, Wool had the good fortune to initially present his new work in group shows at highly respected galleries such as Annina Nosei and Paula Cooper. His first solo show was at Cable Gallery on Broadway (1984), where he began to make important, life-long friendships with influential artists, including Richard Prince and Robert Gober. He later joined Luhring Augustine, where his allegiance remains to this day. With the stability of a distinguished gallery and the deserved recognition it provided, Wool quickly gained critical attention with his highly disciplined and revolutionary exploration of novel processes and mediums with an emphasis on blending the spirit of his downtown surroundings into his work. His motivational notebook recorded the daily photographs he took en route from his East Village studio to his loft in Chinatown. Keeping the focus on the mean streets of Lower Manhattan, especially late night storefronts, the groups of grainy prints on display seem to be a Rosetta stone for interpreting the insightful visual genesis connected to a distinctly urban inspiration that he carried all along in his (very) hip pocket. Several other artists come to mind whose early black and white imagery and constant photographic exploration became an enduring thumbprint on their work: Rauschenberg, tired of being sued for copyright infringement, starting taking his own "safe" snapshots that were eventually transferred to canvas; Dennis Hopper's superb pictures of street life, signage and architecture (which were "re-discovered' at Gagosian earlier this year); and Warhol, whose extended paintbrush was in actuality a camera, in addition to appropriated images found originally in newspapers and magazines.

The artist was born in 1955 in Boston to a molecular biologist father and psychiatrist mother, and grew up in Chicago fascinated by art. He studied under Richard Pousette-Dart at Sarah Lawrence College, and then enrolled in the New York Studio School, where Wool earned his sheepskin, and subsequently settled downtown, surrounding himself with the budding, anarchic, freewheeling experimental energy of the punk and No Wave scenes, which ultimately became a defining influence on his approach to art-making. Just as pioneering, authentic and freewheeling American jazz had a direct effect on abstract expressionists, the inventive and unrestricted riffs and lyrics drifting out of alternative music venues like CBGB and the Mudd Club permeated the air while elevating outlawed street art, spray-paint tags and cartoonish anti-establishment imagery to a marketable acceptability. So this was an exciting period for artistic investigation of a different voice in sync with punk and sophisticated "art rock" bands such as the Talking Heads and the B-52s. At a time when many considered painting outmoded and irrelevant, Wool pieced together a novel mode of picture-making with a playbook of Duchampian readymade blueprints, reproduced with the aid of decorative paint rollers stamped with floral and geometric designs applied on top on slick metallic surfaces, perhaps taking a cue from the grandfather of pattern and decoration, Robert R. Zakanitch.

These quasi-wallpaper samples are strikingly simple and easy to digest, as are Wool's personal slant on generic block letter forms that spell (or misspell) out modern day text messages, all on pure white backgrounds. The stenciled, unpunctuated words and phrases in capital letters are captivating and owe their genesis to the serendipitous discovery by the artist of a spray-painted stencil on the side of a white van exclaiming "SEX LUV." Thus began a series of late nights with the letterman, which produced an impressive inventory of endless, deadpan teasing observations, abbreviations and private recommendations, with my favorite declaring, "IF YOU CAN'T TAKE A JOKE YOU CAN GET THE FUCK OUT OF MY HOUSE." The concept of text in art is, of course, nothing new, with a long line of spelling bee contestants from as far back as Jasper Johns and Robert Indiana, and later on artists Jenny Holzer, Barbara Kruger, Ed Ruscha and Bruce Nauman, among many others. But Wool sends out his own idiosyncratic S.O.S. in condensed white squares that are all his own particular style, having gained authority, critical recognition and stamina.

Although I admire the appropriated patterns, blurry photographs and word documents in this memorable show, as a practicing artist and a critic I have to admit I'm wild about Wool's large, risk-taking grayish paintings filled with meandering and tangled black enameled line applications, which are brilliantly executed and paradoxically beautiful. This is constructive and destructive mark making at its best and at the end of the day is akin to successfully building a crossword puzzle from scratch, where decoded abstract clues must fit horizontally and vertically in order for this handsome new gestural language to make sense. The works seem to begin without a plan, although the artist quickly lays down a predictable escape diagram once he is immersed within the picture. Dullish gray surfaces are first wiped down with a rag to create a layered effect, and then revisited with a clever, wandering, often truncated, blackish spray painted stroke that simply has no equal.

To fully appreciate this novel dimension in art, it helps to be familiar with de Kooning's genius for transforming a single spontaneous initial gesture into a full bodied, masterful rhythmic composition, or to recall Cy Twombly's scrawled surfaces, Dan Christensen's spray paintings of the late 1960s, or Richard Diebenkorn's aptitude for filling up an empty space with drama and elegance. Much of the instinctive skill and potency of these works is founded in selective erasure and purposeful subtraction, which also generates ghostly silhouettes and scrubbed out, negative shapes that become oddly positive. It's tempting to mention Rauschenberg's infamous Dada-inspired Erased de Kooning on paper (1953, collection of San Francisco Museum of Modern Art) in the context of discussing decomposition and ironically erasing abstract strokes to make your mark. By the way, legend has it that Rauschenberg promptly returned the original drawing received as "not good enough to be erased," and demanded a more acceptable sacrifice. In this museum survey of acceptable (and consequently erasable) canvases, unfolding spidery lines are sprayed quickly, imitating an East Village tagger on the run.

Then the remaining still wet graffiti lines are skillfully altered, diced, sliced and interrupted to achieve a genuinely heroic and historic balancing act. The large grayish works can almost be interpreted as aerial views of a decaying, black-topped, cloverleaf interstate gone wild. For an encore, Wool metaphorically dumps out a soup can of worms that are determined to escape by wiggling in any promising direction while leaving behind a recognizable and intelligent, earthly, elongated footprint on a new American painting that is unlike any other I've ever seen. Richard Armstrong, director of the Guggenheim, suggested to me that figuratively "Wool is the great-grandson of Franz Kline," and accordingly, if you look closely for visual evidence connecting the two artists from groundbreaking nonrepresentational colorless paintings to a dramatic intuitive knack for compositional precision, you'll get the picture.

The exhibition is on view through January 22, 2014 and will travel to the Art Institute of Chicago. Go to www.guggenheim.org to order the memorable catalog. 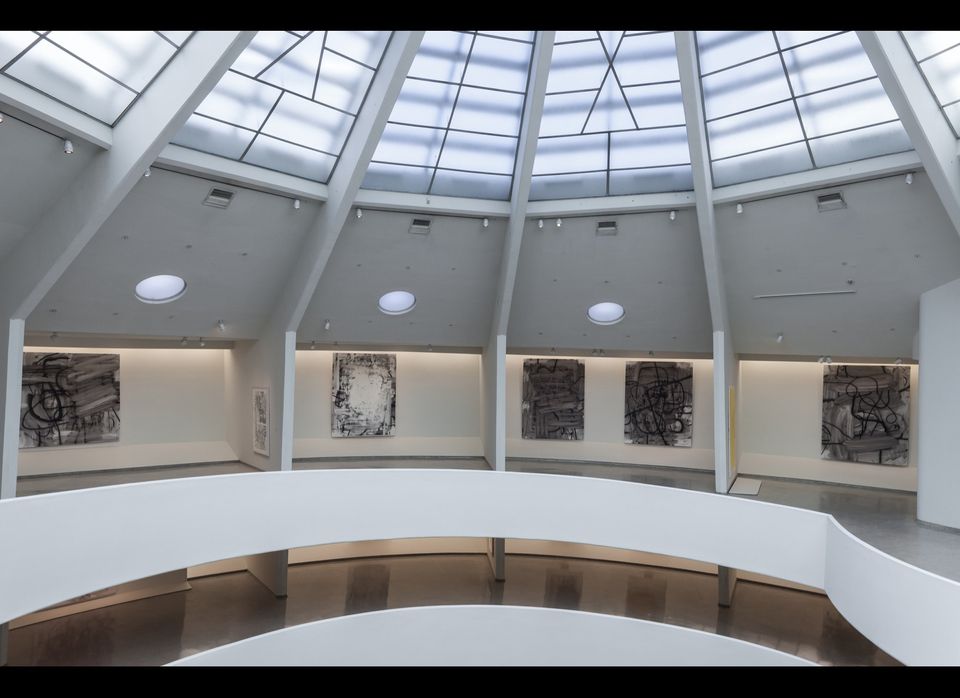