Trying to tell the stories of the latest human catastrophes in the Democratic Republic of Congo feels like woolgathering. Not the popular definition of a "flight of fancy," or Patti Smith's phantom woolgatherers clothed in "strange archaic cap and dress," in her magnificent story/poem Woolgathering. No. This is literal woolgathering--wandering from bush to bush and picking tufts of wool from sticky brambles that have torn the coats of lost sheep that wandered into the thicket.

As a writer, I feel buried in the wool. The fibers of information, true and false, threaten to suffocate any desire to try to tell the story. The thread of truth exists in thousands of pages of field reports, government propaganda, human rights press releases, emails from Congolese friends, personal photos from Congolese IDP camps, and press releases from the United Nations High Commission for Refugees (UNHCR). It is the responsibility of the writer to weave the garment of truth and use threads and patterns that are beautiful enough to lure the reader into a fascination with horror. 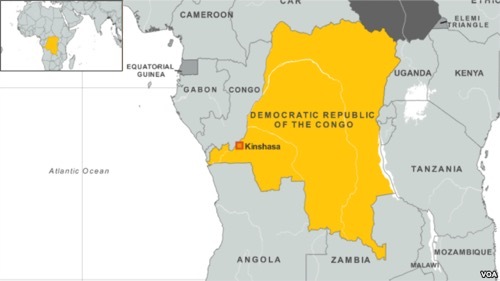 The story of Democratic Republic of Congo could be a lovely tapestry, woven with tribal traditions and knowledge---infused with the colors of fertile valleys, endless forests and mountains--and the patterns of wildlife and minerals found nowhere else on earth.

Or it could be a moth-eaten blanket, stained with blood and disease--of no use to anyone.

The writer can begin with the email from an old friend with family in Beni, who casually mentions the slaughter of several cousins by axe and machete a month ago.

The United Nations mission MONUSCO is denying rumors that the force has supported and even armed ADF fighters. The ADF is reported to have claimed four more victims last Friday night in Butemba, with unidentified gunmen killing two people in Rutshuru the following evening, according to IPIS. The ADF is a rebel Ugandan force.

Or, consider a recent urgent press release by the United Nations High Commission of Refugees, detailing the flight of hundreds of thousands in Katanga Province's "triangle of death." 400,000 have fled their homes since the end of 2012. 71,000 in the last three months. This does not count the 2.6 million internally displaced (IDPs) in the entirety of Congo. In October UNHCR reported over 1,700 "incidents" involving looting, burning of houses, extortion, torture, forced labor and sexual violence in the triangle formed by Manono, Mitwaba, and Pweto in northern Katanga Province.

Like Ebola in western Africa, it is feared the numbers are higher that the verified reports.

The thick wool of atrocity chokes and blinds the senses. We can smell evil in the oily wool, but we cannot form the words to describe it, nor can we craft sentences that cloak atrocity in reasonable explanation.

The working and very public theory is that eternal tensions between the Luba (Bantu) and the Twa (Pygmy) "flared up" a year ago. The Mai Mai Bataka Militia (one of hundreds of secessionist militias in-country) aligned with the Luba against the Twa. The Mai Mai Bataka Katanga militia has been fighting the Congolese army since 2011 and found a willing ally in the Luba. Voice of America has a riveting report from UNHCR's Celine Schmitt, who spoke about a trip to a remote village, where nineteen children have died, not from Ebola, but from treatable diseases like malaria and dysentery.

Where is the central government in the Democratic Republic of Congo in all this?

Fragments of information suggest that the President, Joseph Kabila, is without political cover. General John Numbi and other prominent Katanga politicians opposed to Kabila are fighting the Congolese army and supporting the rebels.

I am still gathering fragments of wool. The elasticity of the fiber stretches the truth. There is no way to spin these fibers into fabric.

An image comes to mind. 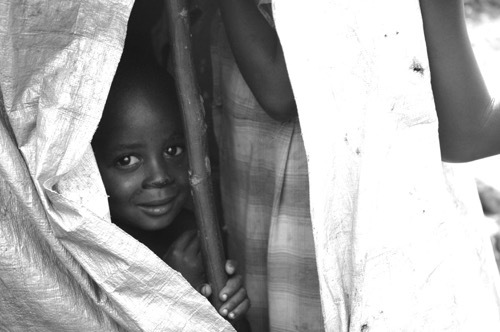 A photo of a boy peeking through the flap of a tent located in an IDP camp in Goma. He is smiling. His nose is running. His mother is hiding from the camera. The year is 2009.

Mothers are still hiding; children are still dying. Katanga province has the highest rate of infant mortality in the world. 184 of 1000 babies die before the age of five.

I wish I could quote Patti Smith, who is about to sing for a beloved Pope, and say, "Everything contained in this little book (Woolgathering) is true." She tells the truth.

But I am woolgathering in Congo, and as a consequence, nothing is certain.

Note: Fellow Huffington Post Blogger Obadias Ndaba challenged me to write something. He is doing the same. Check him out.