Scientists may be one step closer to bringing the woolly mammoth back to life.

In a new study, an international team of researchers has sequenced the genomes of two Siberian woolly mammoths -- revealing the most complete genetic blueprint of the prehistoric beast yet.

“This discovery means that recreating extinct species is a much more real possibility, one we could in theory realize within decades,” study co-author Dr. Hendrik Poinar, an evolutionary geneticist at McMaster University in Canada, said in a written statement. “With a complete genome and this kind of data, we can now begin to understand what made a mammoth a mammoth -- when compared to an elephant -- and some of the underlying causes of their extinction which is an exceptionally difficult and complex puzzle to solve." 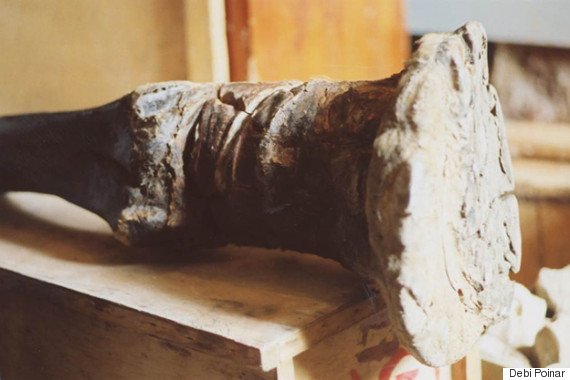 Mammoth remains found on Wrangel Island in Russia that were used in the study.

For the study, the researchers analyzed bits and pieces of highly fragmented DNA from the specimens of two male mammoths -- one of which lived in northeastern Siberia nearly 45,000 years ago, and the other around 4,300 years ago on Russia’s Wrangel Island, located in the Arctic Ocean.

Clues to cloning. The researchers used the DNA fragments to sequence the mammoth genomes, and then compared them to the genome of a modern African savanna elephant (a relative of the mammoth) to identify key genetic differences between the two species, the Los Angeles Times reported.

"This basically gives you the changes that account for a mammoth being a mammoth -- the changes that allowed them to have hair, tremendous amounts of fat, large tusks," Poinar told CBS News. "This then gives us this roadmap, so to speak, of what we would need to change in an Asian elephant chromosome to make them mammoth-like."

No, Poinar and his collaborators are not attempting to resurrect the mammoth. But in theory, how would that work?

Some scientists say that a complete copy of the mammoth's DNA could be inserted into an egg of an elephant. If that elephant carries the baby mammoth to term -- voila, a cloned copy of the extinct creature could be born.

"Can we do it? I think the future is sort of inevitable, in that someone will be able to do it," Poinar says in a video interview, released by McMaster University (above). "But the bigger question, of course, is should we do it? And that's something I've been juggling with for 25 years actually in the field."

Mammoth mystery. The newly sequenced genomes are also helping to solve a long-held puzzle over why mammoths went extinct in the first place. Some scientists believe climate change caused the animal's demise, while others blame humans.

Now, the genomes have confirmed the timeline of the woolly mammoth's downfall -- and it's pretty peculiar. The genomes suggest that woolly mammoth populations suffered and then recovered from a significant setback around 250,000 to 300,000 years ago, before another severe decline occurred in the final days of the Ice Age, marking the end of the species.

"We were very surprised by this," Dr. Love Dalén, an associate professor of bioinformatics and genetics at the Swedish Museum of Natural History and a co-author on the study, told BBC News. "It seems like there was an ancient bottleneck. It was before modern humans were in this region and we are not entirely sure what caused it. A good bet is that it was due to a past change in climate."

According to the Times, the researchers plan to examine more mammoth DNA for additional clues to the animal's elusive history.

The study was published online in the journal Current Biology on April 23, 2015.