It's not exactly the boy who cried wolf - it might be more correct to call it the man who hollered woolly mammoth.

It appears that a story last week about a hairy, woolly mammoth seen walking across a Siberian river is a hoax.

In the opening frame of the blurry video that went viral, an animal is seen moving through the Kitoy River. Superimposed over the video are the words: Siberian Mammoth, Copyright Michael Cohen/Barcroft Media

That's where the controversy and accusations began to fly.

WATCH THE VIDEO THAT STARTED IT ALL:

Paranormal writer Cohen has been criticized in the media for offering numerous videos he claimed were evidence of unexplained things like aliens, UFOs and now a woolly mammoth.

Based on Internet comments everywhere the story was posted, it doesn't look like many readers were surprised by the outcome. In fact, many were downright angry that Huffington Post and other legitimate media outlets gave any space to the story.

But one of those comments -- the most eye-opening one -- found its way over the weekend to the HuffPost story. Written by documentary filmmaker Lou Petho, it read:
"I'm the guy that filmed the river footage in the Sayan Mountains in the summer of 2011. ... I don't recall sighting a mammoth. ... I had no idea my footage was used to make this fake sighting, and question if a law was broken here." 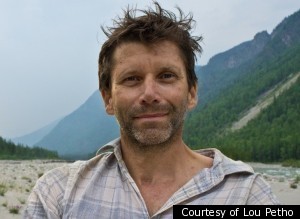 After seeing the "mammoth" video revealed to the world last week, Petho was shocked, because he initially filmed the river for a special documentary he's working on about his grandfather's escape in 1915 from a Siberian POW camp.

He surmised that Cohen may have taken his high definition footage and used it as a backdrop to create an elaborate hoax showing a woolly mammoth (or bear, as many readers insist) crossing the river.

"I checked it against my footage and knew it was mine when I looked at the placement of rocks in the foreground," Petho (seen above) told HuffPost, who he said was the first media organization to respond to his concerns.

"It was a mix of emotions," he added. "At first I was just pissed off that somebody would do this. It was obviously orchestrated and I assume money was made over it, so I was annoyed about that."

Woolly mammoths -- large, hairy prehistoric elephant-like relatives -- supposedly have been extinct for thousands of years. Yet, in 2010, Japanese scientists suggested it might be possible to bring one of the animals back to life using frozen mammoth DNA found preserved in a partial mammoth carcass in Siberia.

When HuffPost contacted Barcroft Media, the co-copyright owners of the video, a spokesman was less than forthcoming. 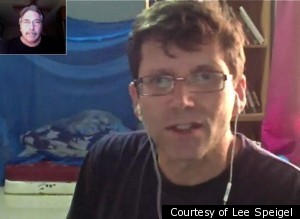 "To be honest, it's not really anything that we want to comment on because we just license videos and images for other people, so we're going to sort it out with Lou and Michael and work out what's the right thing to do," he told HuffPost.

According to Petho, Barcroft Media was initially upset because it was under the impression that the river footage was Cohen's property. Barcroft has reportedly agreed to a financial arrangement with Petho (shown at right in a Skype interview with this reporter).

But what about the third player in all of this? When asked for comment, Cohen wrote in an e-mail to HuffPost, "I just looked at this footage and all it proves is that someone filmed the same spot at another time. While this new revelation does open up the prospect that this might well be a hoax at this stage, it is not conclusive and might simply be a case of the same spot being filmed twice.

"I was only given sketchy details regarding this footage," Cohen added. "And it is interesting to note that if, indeed, a mammoth was filmed, it occurred in the Irkutsk region -- an area of intense paranormal activity."

If there were any doubt about the difference of opinion regarding when the river footage was shot and by whom, take a look at this new video posted by Petho today:

Despite any compensation he may see, Petho is still upset that Cohen or anyone else could so easily put his own copyright name on a video. "If the general public wants to see a bunch of hoaxes made up, then let it be included in something like a hoax-of-the-week, and have fun with it.

"But to try and sell it off and make a profit out of it, that's not right."

Petho said he's met people who love to con the public and manipulate and get people to believe something that's not true. "I don't understand why, and it's just beyond my thinking. People should stand up to this kind of abuse on the Internet."