What words give a Merriam-Webster lexicographer the most consternation?

Some people might envision a list of 10-dollar terms like “verisimilitude,” “nidifugous” or “poniard” as true dictionary stumpers, but as word maven Kory Stamper explains in her new book Word by Word, the hardest definitions are those attached to simpler letter combos. Think “but,” “be,” or “the.”

The challenge for lexicographers, Stamper explains, is not only to provide a concise, clear definition for the average dictionary user, but also to make sure the definition comprises the many uses of a word. Is “do” used the same way when someone suggests you “do dinner” and when you “do your homework”? That’s for the editorial staff at dictionaries like Merriam-Webster to nail down.

Stamper makes it clear in her book that the job of Merriam-Webster and other dictionaries is to be descriptive, rather than prescriptive, when it comes to chronicling language. That means instead of delivering instructions for “proper” usage from on high, lexicographers aim to document and define language as it is actually used. That’s right: As much as “irregardless” feels like the typeset equivalent of nails on a chalkboard for some, its use is widespread enough to deserve a spot in the dictionary. (Same goes for “facepalm” and “binge-watch,” two recent additions.)

In recent months, Merriam-Webster has shown that dictionaries can be punk rock, too — the dictionary’s Twitter account has trolled Kellyanne Conway for her definition of “feminism” and Scottie Nell Hughes’ “mazel tov cocktail” slip, and became the fact-based watchdog we needed during the chaos of election season. In this political era, we are reminded daily of the power of words, and Stamper’s book is yet another example of that.

A book about dictionaries could likely seem like a dream to a certain sect of book-lovers and a snooze-fest to others, but Stamper’s accessible yet pragmatic writing falls somewhere in the middle: A pleasant, yet realistic, view of the challenges that come with working at one of the best-known dictionary publishers out there. Despite the mid-century coffeemaker Stamper says is still present at the Merriam-Webster offices, ruminating on usage in a quiet office sounds ideal for the average bookworm — until one is tasked with reviewing the definition for “take,” as Stamper is in a middle chapter of the book.

“Sometimes these small words are pulled from the regular batches and are given to the more senior editors for handling. They require the balance of concision, grammatical prowess, speed, and fortitude usually found in wiser and more experienced editors,” Stamper writes.

Seriously: “Take” is no joke. If you’re not convinced, though, don’t take our word for it: Pick up Word by Word and see dictionary-making in a way you hadn’t before.

Word by Word is out now. Pick it up on Amazon or your local indie bookstore.

This Word Is Harder To Define Than 'Schadenfreude' Or 'Antidisestablishmentarianism'
Richard Scarry's Best Word Book Ever 1963 vs. 1991 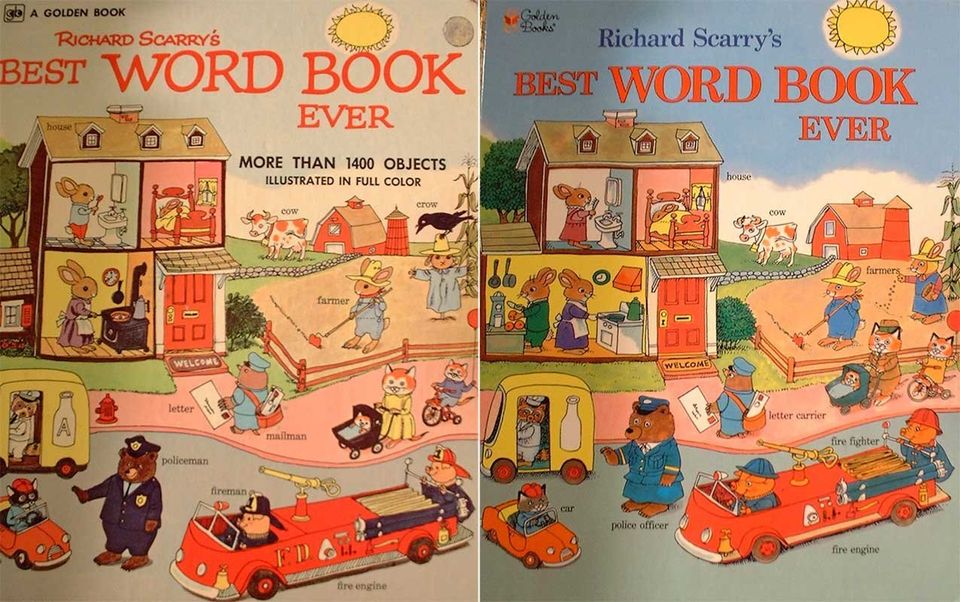 1 / 13
In the most recent version of the book, a male bunny cooks alongside the female bunny in the kitchen, a female farmer joins the male farmer in the field, the police officer bear is&nbsp;female, the "mail man" becomes a "letter carrier" and the cat pushing the stroller changes&nbsp;from a mom to a dad.
Courtesy Alan Taylor