I checked my word cloud twice before sharing it publicly because it sort of made me uncomfortable. The word at the very center, my single Most Used Word of the Year, was perfectly appropriate: the name of my community and the shorthand for my public school district, both of which consume my time and energy as a full-time volunteer. But the words surrounding it didn't give me the same "oh, those are so me" feeling. The things I love to do -- running, writing, voting, traveling -- were tiny, if there at all. The things I care deeply about -- childhood cancer research, women's reproductive rights, social justice -- also barely visible. 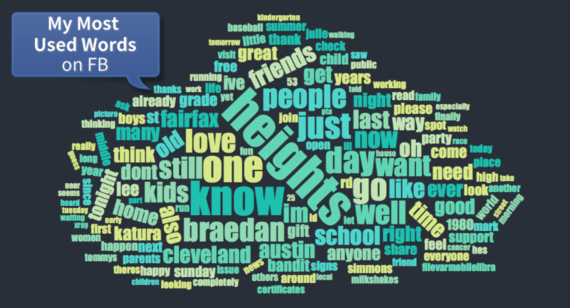 "Know" featured prominently, in the number two word spot. Was that obnoxious? Was I constantly telling people everything "I know" to be true? I think it's more likely that I start a lot of posts with, "I know I just asked you to do such-and-such, but now I'm going to ask you to do something more." Or "I know many people have posted about this, but here is another perspective." Or even, "You know I love this one..." before sharing a particularly appropriate meme.

Of course, there were other good words front and center in my cloud: "love" is pretty big, as are "friends," "kids," "school." Not as big as they are in other people's word clouds, but this isn't a competition, right? Or is it? I found myself deeply impressed with the word clouds of others, even vowing to myself, "Next year, I'm going to use the word love more often. Or grateful. Or appreciate. Now those are good words." But sometimes the word "outraged" is good too. And, given the current political climate, necessary. As are words like "disgusted," "sad," or "disappointed." Even words we may consider intrinsically negative, like "racism," "intolerance," or "standardized testing" could, should and do feature heavily in the word clouds of people fighting to end them. (Yes, I just used standardized testing alongside racism and intolerance, but that's a post for another day.)

One surprise in my own cloud was the relatively small size of the word "cancer." As the mother of a two-time survivor, I've spent years advocating and fundraising for childhood cancer research. But my son is well now, incredibly well, and I don't need to use that stinkin' word so much these days. No one can argue that that's not a good thing. But does it mean that I've given up the fight just because my own kid got better? Am I ignoring the needs of the thirty-six children diagnosed yesterday, today and tomorrow? I know I'm not, as evidenced by my ever-growing fundraising efforts (and by what's in my heart)... but that's also a post for another day.

Is there some inherent value tied up in the words that appear in our clouds? Do they define not just the language we use but who we are? Do they truly reflect what we think most about, what we care most about?

If so, then most of us who are parents to more than one child are in big trouble. I know I'm not the only mother who had one child's name feature more prominently than another's. The daughter of a woman I know was the main, front-and-center word while her son's name was notably smaller, still visible but tucked off to the side. Does she love her daughter more than her son? No, of course not. But I know this seven-year old girl and she has an enormous personality. I find her very presence exhilarating and inspiring, but I bet her parents sometimes find her exhausting and exasperating. Maybe that's why she was front and center.

The name of my older son came in pretty large. The name of my younger son was considerably smaller, by about two font sizes (how's that for a new way to measure worth -- by font size?). What does this mean? Does it mean anything at all? My second son, the cancer-surviving one, has been at the center of most of my writing over the years. Perhaps now that he's well, I'm evening things out. But I doubt it's that conscious. It could just be that the older one has recently started middle school and embarked on a newfound independence, prompting me to write about him more frequently. Or most likely, it's that, as the way more chatty of my two offspring, he provides more Facebook-worthy quips.

I can tell from people's sheepish or self-congratulatory comments as they share their own word-brains that we all sense the value tied up in this. I had friends whose biggest words were "happy," "family," and "love," say, "This makes me so proud!" (and I agreed; their pride seemed as justified as my own guilt and envy). Others, whose clouds featured technical work-related terms, said, "This is terribly boring. I promise I'll write about more exciting things next year."

Should we now censor what we say in an effort to create a more Facebook-perfect, representative word cloud for 2016? As a writer, I appreciate the value of a single word, the ability of a well-placed -- or poorly placed -- word to change the meaning of a sentence, paragraph or idea. But these clouds epitomize words being taken out of context. We are not single terms; we are more than a random computer-generated list of individual words, devoid of any meaning.

As we teach our children, words matter. But word clouds don't have to.