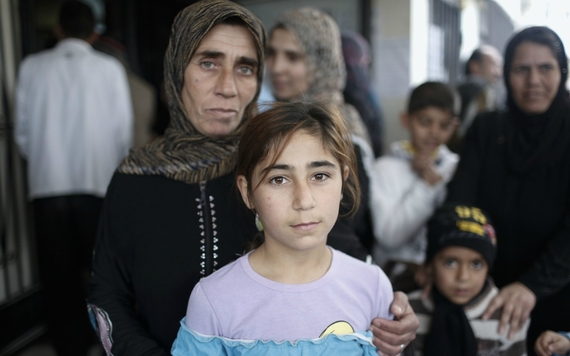 Syria has been at war for four years now, with horrific consequences for the 22 million people who live there, or have fled, and causing overwhelming strain on neighboring countries. This conflict is only getting worse: More than 210,000 have lost their lives, about 76,000 people in 2014 alone, including thousands of children. Nearly four million more have fled, fanning out across Turkey, Lebanon, Jordan, Iraq, and Egypt to find shelter, water, and food. Some are crowded into decrepit buildings. Many are in tents.

For those who stayed in Syria, life is not only a struggle for basic needs - it is dark. That's what I can't get out of my mind as news outlets around the world carry stories marking the anniversary of this bloody conflict: 83 percent of all the lights in the country have gone out since the start of the conflict, according to the #withSyria coalition, of which Oxfam is a member. In some places, like Aleppo, the darkness is even greater, with 97 percent of the lights off.

That darkness is a painful metaphor for all that's happened to this country with its once-thriving middle class. Teachers, doctors, lawyers and other professionals who once lived secure and ordinary lives now find themselves wondering when the next bomb will drop and where their next meal will come from. Driven from their homes, Syria's citizens are sinking into a new and profound poverty. Their life expectancy has dropped by 24 years -- from 79 to 55. That's almost a whole generation gone.

And, as conflict and displacement continue, the youngest generation faces huge obstacles to someday rebuilding the country they have lost. Half of all school kids haven't seen the inside of a classroom for three years. How will that generation ever catch up?

As terrible as those kinds of questions about the future are, it's the reality of the present that weighs so heavily on the shoulders of Syrians trapped in this endless conflict. I'm thinking of Samah, a 37-year-old mother of six children, who was interviewed for a report called, "Failing Syria," that Oxfam and 20 other aid groups just published together.

"When we were in the caves, we used to go to nearby farms to collect anything we find, sometimes grass or bark, to feed to our six children," she said. Occasionally, she would meet a farmer too afraid to go into the field to harvest because of the airstrikes, so she would harvest in exchange for a bit of money and some food.

A few months ago, Samah's family finally got a tent so they can now live on their own.

"Can you imagine that our dream had become just to have our own tent?" she asked. "I still think that living under shelling and airstrikes is more dignified than this kind of life. If a shell hits you, then you will die instantly, but here we are dying every day a thousand times over. We are dying from cold, illness, and hunger."

No one should have to live through what Samah and her children -- and countless other families -- have lived through these past four years. The threat of airstrikes forced her family to flee from their home for the safety of some caves in the mountains.

The "Failing Syria" report documents the total failure of the warring parties and the members of the UN Security Council to adhere to resolutions passed last year that called for an urgent increase in humanitarian aid and an end to attacks on civilians, among other commitments.

To give Samah's family, and others like them, the chance to rebuild their lives, we all need to take action. Here in the U.S., the administration needs to develop a comprehensive strategy that sets a vision for an end to the conflict and needs to show support for immediate and inclusive peace talks. At the global level, the UN Security Council needs to act on its resolutions. While they were an important step, they mean nothing without the actions to back them up. You can be part of the solution too, and show that you are #withSyria at this terrible anniversary, and every day.

We cannot forget about the millions who have lost their lives, their homes, their livelihoods and their hope. With the right commitments and actions, together, we can turn the lights back on.