Whether you agree with the advice or not, some no-nonsense words directed at teenagers have drawn the attention of parents and youth alike after going viral on Facebook. Posts featuring a New Zealand school newsletter clipping have well over 10,000 shares on Mix 96.7's page alone.

The advice came courtesy of a principal named John Tapene, who was quoting a judge who regularly deals with youths. The judge was aiming to answer questions in the vein of, "What can I do and where can I go?"

The gist of his answer? Get out there and do something: 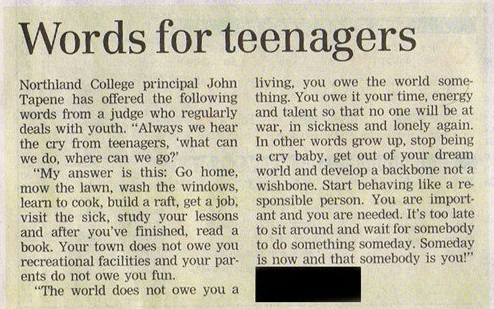 Responses to the clip include enthusiastic approval, with people saying they're going to print it out and post it on their refrigerator, as well as disproval, with others deeming it far too harsh and old-school authoritarian. (The latter could be the result of the line where the judge says stop being a cry baby and to develop a backbone instead of a wishbone.)

For those who are suggesting the advice is somewhat dated, there might be a good explanation: If the Pierce County Tribune is correct, then these words date back to 1959.

According to a 2010 post on the newspaper's website, staff members came across a clipping with a letter from Judge Phillip B. Gilliam of Denver, Colo., published on Dec. 17, 1959. The website seems to sugget that the letter originally appeared in the South Bend Tribune a few weeks earlier.

The full text of what may be the original letter can be found on the Pierce County Tribune's website and it ends with different words than those presently circulating on the web -- ones that might cause more of a stir:

You're supposed to be mature enough to accept some of the responsibility your parents have carried for years.

They have nursed, protected, helped, appealed, begged, excused, tolerated and denied themselves needed comforts so that you could have every benefit. This they have done gladly, for you are their dearest treasure.

But now, you have no right to expect them to bow to every whim and fancy just because selfish ego instead of common sense dominates your personality, thinking and request.

In Heaven's name, grow up and go home!