As best friends turned TV personalities, podcasters, and mixology masters, Alie Ward and Georgia Hardstark are making names for themselves, and they're doing it in hilariously creative ways. Whether it's on the screen or in a pillow fort, you never know what you'll get with Alie & Georgia, but you know it will be entertaining. I was recently lucky enough to get to ask them a few questions about their adventures, projects, favorite snacks, and everything else that matters. Mostly questions about snacks, though. They're a riot and I want them to be my best friends, but not the ones who show up at your house unannounced all the time.

So let's jump right into it, there's an election happening pretty soon here. If you two were running for president what would your campaign slogans be?

Georgia: "No thank you!" I would never want to be president and I can't imagine a scenerio wherein anyone else would want me to be, either.

You've accomplished a lot. In 2009 you created a video showcasing something called The McNuggetini. Can you explain this concoction? How did this become a thing? And did you expect the video to be so popular?

The McNuggetini started as an inside joke between the two of us. It was basically a really gross cocktail that we created and then just ran with the joke. Some would say we ran too far. We were mainly fleeing our desk jobs and: so far, so good.

Fast forward and now you have an extremely entertaining show, Tripping Out with Alie and Georgia, on the Cooking Channel, is this a dream come true?

We always joked about having a travel show together, so doing 6 episodes of Tripping Out for Cooking Channel was a dream come true. We really wanted to show two women who were allies -- and who could swear like sailors and eat like dudes. Essentially, everything that TV's "housewives" aren't allowed to do.

You're both very funny people, and your humor never seems forced. You appeared on Comedy Central's Drunk History, one of my favorite shows. And, actually, Alie I remember you were in one of the first Key & Peele episodes I ever saw. So how has humor played a role in your lives and with your projects?

Why thank you so much! One thing that drew us to each other as friends was definitely humor-- dark, dark humor. We used to crack each other up on G-Chat all day while we were at our day jobs, so we just figured we should monetize that. I mean, this is America.

What's it like working with your best friend? Do you two ever fight?

It's a lot like working with a sibling. We absolutely adore each other, we know exactly what makes the other one happy and cranky, and sure: sometimes we get on each other's nerves. Working in TV means long hours, weird time zones, and having to be perky even if you're going through a breakup or you have to fart. But after so many years, we know to "talk it out" if one of us ever feels butthurt or sad and it usually makes us closer in the end. We also both carry knives at all times. (That's not true.)

If you could travel to any fictional place for an episode where would you go and why?

Georgia: I think Wonderland seems pretty cool. Lots of tea parties and weirdos. Plus I'm really into true crime so I could investigate any beheadings ordered by the Queen of Hearts.

Alie: I'd swing by Narnia for the sleigh rides and Turkish Delights or jump in Willy Wonka's chocolate river and maybe make out with him? He seems stylish and he owns his own business.

Speaking of Turkish Delights: What's your favorite thing to snack on?

Alie: It's too mortifying. It's so gross. Canned smoked oysters. It's like what you would eat if you lived in a traincar during The Depression. I can't explain it.

Georgia: Matzo with butter and jam. And now I'm drooling.

So some things you do involve alcoholic beverages. Do either of you have any bad drunk habits?

We both make terrible food decisions after we make bad drink decisions. Will we eat a hot dog prepared without food permits on the sidewalk of Los Angeles? That really depends on if whiskey is involved.

If Alie & Georgia the friendship were to be a cocktail, what would it be?

Maybe a beer cocktail: complex, unusual, fun, with a little bite. Or a kombucha wine spritzer: super healthy for the most part, with just enough mischeif.

Let's talk about pillow forts. You record your podcast, Slumber Party, in one. What's the trick to building a stable, yet comfortable fort?

Oh! We mastered this! Tie a string to the corners of the blankets, and then tie the other end of the string to a doorknob or a lamp or something. This way, you can construct a series of blanket awnings for increased indoor volume and structural support. 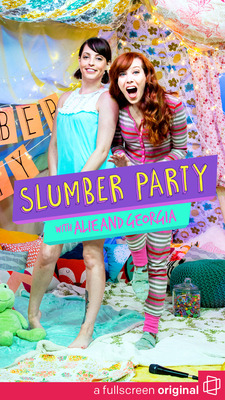 Tell me a little bit about the podcast itself. What can listeners expect to hear about when tuning in?

Now that Fullscreen gave us a video podcast, viewers can actually see the pajamas (and shenangins) we get into. We have an incredible pillow fort and our guests are the best. Everyone seems to relax and let down their guard when they're wearing footie PJs and slippers.

WNYC included you on their list of 111 magnificent female podcasts. Not really a question, that's just awesome.

We know! We love being included on a list of really cool women. Lady podcasts are the best because women are so much better than men at opening up and expressing ourselves. (Generally, of course.) The two of us really put the thousands of dollars we've spent on therapy to good use.

Do you have any non-cliche advice for people wanting to push out great, engaging content for a living?

We have a secret code that we whisper to the other when they're being to "on" or inauthentic. It really just boils down to being yourself at all times, like pretending that you're always chatting with your BFF. In our case, we are!

I have to ask, what are both of you watching on Netflix right now? Any recommendations?

We love the new Maria Bamford show. She's weird and wonderful and we want to be her friend.

Finally, what's on tap for your future? Any crazy secrets you can share?

We've got a couple of shows brewing with Cooking Channel, which is awesome. We're hoping the new Slumber Party video podcast on Fullscreen becomes a worldwide phenomenon, and we'd like to buy matching mansions at some point. Ya know, modest goals.

Right, of course. Just the normal stuff! Thanks so much for your time. You both are heroes and good job with life.