Daniel Powell has done a little bit of it all when it comes to comedy and entertainment. From his time working on the Emmy and Peabody award-winning show, The Daily Show With Jon Stewart, to contributing to Robert Smigel's TV Funhouse segments on Saturday Night Live, among other popular shows, Powell has held many different roles from writer to actor to producer. He is now the Co-Creator and Executive Producer of the hit show Inside Amy Schumer, and was nice enough to answer some questions about the show and his time in the industry.

You've performed at UCB, written for Emmy and Peabody award-winning shows, produced, and more. Did you always want to work in the entertainment and television industry?

Not always. In high school I thought I was going to work in politics, but thank God I avoided that cesspool. My interest shifted in college.

So have you always had an interest in comedy? Or did something happen to you to spark that passion?

I grew up watching The Simpsons and Seinfeld and Saturday Night Live, and certainly those were major influences on my taste and sensibility, along with comic strips like Bloom County and The Far Side. In college, I wrote for the campus humor magazine and eventually became the editor-in-chief, and that took up more time than most of my classes. I think of all the issues I edited as my college thesis.

Do you have any comedic mentors that you can specifically point to helping you or influencing you?

Years ago I had the fortune of working briefly for Robert Smigel, who is a legitimate genius. I was a junior producer at The Daily Show with Jon Stewart when Colbert was still a correspondent, and I was already a fan of his from Strangers with Candy, but watching him work was something else. Talent of that magnitude is really extraordinary to witness in person. Amy is like that.

You're pretty active on Twitter, is that safe to say? Do you enjoy social media? How has it impacted comedy or content in general?

Is tweeting once every three days considered "active?" I am one of those jerks who hardly ever tweets but still feels entitled to more followers than I have. I feel like I should engage more because it really has become the nexus of the comedy world, but ironically I'm too busy with work to spend more time on it.

It was actually "Come Inside with Amy Schumer." The pilot used that title. After we got picked up we realized it probably wasn't the best idea, so we simplified it -- keeping the innuendo but making it less explicit. We came full circle when Amy named our recent clip show "Rubbing Our Clips." 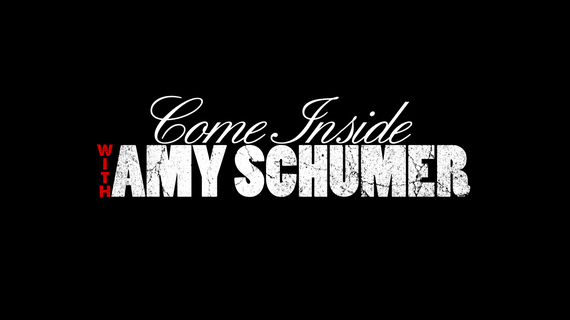 As Co-Creator, how did you come up with the idea for the show?

I brilliantly came up with the idea of doing a show with Amy Schumer after Amy IM'd me and said, "Let's do a TV show together!" I feel like it was pretty bold and innovative of me to respond to that message and say, "Sure." The original treatment was for more of a studio-based talk show. It would have included some sketch, but would have had more of a Chelsea Lately vibe.

Our future head writer Jessi Klein got slightly drunk with Amy one night and talked her out of that format, so we scuttled the first treatment and came up with a "dream show" that was reverse-engineered from Amy's skill sets, while being careful to steer clear of what Key & Peele and Kroll Show were doing at the time.

One reason I really admire Amy, besides her rare talent, is her authenticity when delivering jokes and stories, in your opinion, what sets her apart from other comedians?

Amy combines a very raw and self-deprecating honesty with a tireless work ethic and a frighteningly preternatural joke-writing ability. She is effortlessly funny, but doesn't let that stop her from working her ass off. It's so rare to find such a pure combination of all the things you need to succeed in this business, and that's what sets her apart to me. She is the LeBron James of comedy.

Do you have a favorite sketch from the show, from any season?

"Girl You Don't Need Makeup" is my favorite sketch from our entire run, because every department on the production delivered at the top of their ability. The idea came from Kurt Metzger, who has written for every season including the pilot, and then the full writing staff jumped in to punch up and tweak every lyric. Then, our writer and producer Kyle Dunnigan, who has a music background, took the reins and produced a song that is catchy enough to be an actual top 40 hit.

Our casting director, Gayle Keller, helped us put together a fake boy band that was so good it fooled a lot of people into thinking they were real. Ryan McFaul, our director, found a way to shoot the music video so it accentuated the jokes without being redundant to the lyrics, and of course Amy's performance, which was basically wordless, was a master class in comedic acting. I still love watching that sketch.

The show often uses humor to shed light on some pretty serious societal topics. When I say that, the gun control infomercial is coming to mind. Why is comedy such an effective tool for discussing these issues?

In short, because comedy is entertaining. Listening to policy wonks bloviate about issues on cable news typically isn't. If you can make a point while making someone laugh instead of doze off, that point is going to occupy more real estate in their brain.

Speaking of important issues. There's an election going on. Not to get political, but if you were running for president what would your campaign slogan be?

"I Don't Want to be Running for President."

Can you explain your role on the show as Executive Producer?

It's basically a big, stressful project management job. I work with our Line Producer (also an EP) Steve Ast to make sure the budget and schedule best reflects how to make the most of our limited resources; I communicate with agents and our production lawyers to help make deals with the key producers and writing staff; I sit in the writer's room and help Amy and our head writer Jessi Klein curate the creative process; I make sure that the creative is effectively communicated to the various production departments to guarantee they are executed properly.

I also sit in on the edit and work with our post producer, Ryan Cunningham, to make sure the shows are the best they can be in terms of editing, mixing, coloring, etc. And I act as the focal point of communication with the network itself.

In short, Comedy Central hires someone like me to make sure that when they write a multi-million dollar check for ten episodes of television, they can be confident they will ultimately receive ten episodes they can put on television.

What's the most challenging part about the job?

How often, if ever, does the team have to pull things back or say, you know, I think this joke may be crossing the line?

Usually it's pretty clear to us right away if something is more offensive than it is funny. We don't have a lot of debates about "crossing the line."

What other television have you really been impressed with lately?

I watch a lot of drama to keep things balanced. I've been enjoying Game of Thrones (of course), The Americans, Jessica Jones, Better Call Saul. I thought The People Vs. O.J. Simpson was exhilarating. As far as comedy, I love Silicon Valley, Broad City, and Last Week Tonight with John Oliver.

Are you currently involved with any other projects you can talk about?

I have a lot of projects in development, but as always, who knows which of those will see the light of day. I'm shooting a small independent movie in August, which is a new thing for me, and I have a mini-series coming out on a streaming service later this year because, you know, that's the future.

What about summer are you most looking forward to? Do you like or hate the beach? The world needs to know.

You are asking someone who has been hospitalized twice for sun poisoning, so the beach is my mortal enemy. If I go, minimum 50 spf sunscreen applied liberally throughout the day.

Thanks for your time, Daniel. I know a lot of people love the show and it's fascinating to hear about what has shaped your experiences as well as what goes on behind the camera.

Follow Daniel on Twitter and be sure to keep up with all the exciting Inside Amy Schumer news.