It's in times of great catastrophe and heartbreak that we need our friends the most. So in the wake of the attacks on Paris and violence in many other parts of the world, we're turning to our favorite neighbor, Mr. Fred Rogers, for a bit of advice.

"My mother used to say, a long time ago, whenever there would be any... catastrophe that was in the movies or on the air, she would say, 'Always look for the helpers. There will always be helpers. Even just on the sidelines,'" Rogers said in an interview with the Archive of American Television. "Because if you look for the helpers, you'll know that there's hope."

Rogers' timeless words were meant to help parents who are struggling to explain tragic events to their children. But they've also been a source of comfort for adults, often resurfacing on social media during atrocities, such as the Boston Marathon bombing, as a reminder that there will always be good people in the world who are willing to risk their own lives to help.

The "helpers" weren't hard to find in Paris -- from the man who pulled a pregnant woman to safety, to the concertgoers and restaurant workers who dragged injured victims away from the scene. Daniel Psenny, the LeMonde journalist who captured the dramatic footage of people fleeing the Bataclan, eventually turned off his camera and rushed outside to help. He was shot in the arm, but managed to pull a victim inside his building.

Another journalist, Sylvain Lapoix, created a hashtag that told stranded Parisians where they could find safe lodging.

And in the days after the attack, we saw Parisians waiting in long lines to donate blood. Others rallied to express their support for French Muslims, who still fear an uptick in misguided, anti-Muslim acts.

According to Yale psychologist David Rand, the altruistic instinct that emerges in times of tragedy may actually be built into human nature. In lab experiments, he found that the less time people had to think, the more they were willing to be kind and generous.

“When forced to make rapid, intuitive decisions, we tend to act the most selflessly,” he told the BBC. “Our default is to cooperate.”

Check out the video for Mr. Rogers' words of wisdom on how to find hope in the middle of tragedy.

Words Of Wisdom From Mr. Rogers For All Of Us After The Paris Tragedy
In Paris' 11th Arrondissement Children Draw Their Emotions 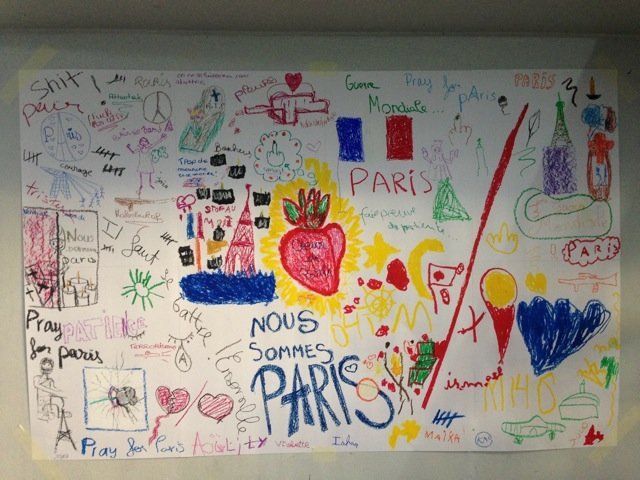